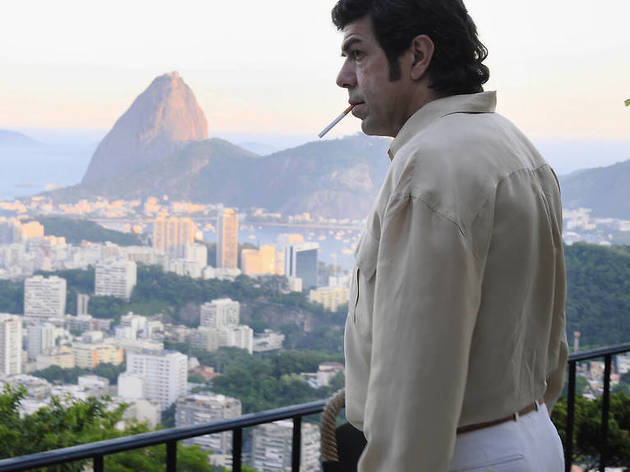 Though the veteran Italian director Marco Bellocchio has had a long, prolific and very distinguished career, it must be said that it is also somewhat uneven – perhaps hardly surprising given that he’s ranged so widely in terms of material. Happily, this portrait of Tommaso Buscetta, a soldier in Sicily’s Cosa Nostra who in the 1980s decided to come clean in court about the activities of many mobster colleagues, is one of his best films; indeed, it may well be his finest achievement in some years.

It begins in Palermo in the early ’80s, as two rival Mafia families get together to celebrate their having apparently come to an agreement on how to divide up the increasingly profitable heroin trade. Soon after, Buscetta, tired of his life of crime, decides to move with his wife to Rio de Janeiro, leaving behind two sons by a previous marriage. When all hell breaks out between the two clans, among the many executed are his sons and his brother. Buscetta is arrested by the Brazilian police for trafficking drugs – a charge he resolutely denies even under torture – and extradited to Italy, where the judge Falcone eventually persuades him to tell the truth about who’s who in the local Cosa Nostra. This, naturally, immediately earns him the hatred of his former colleagues, who brand him an informer and threaten him and his family – living secretly abroad under a witness protection plan – with death.

In terms of genre, there may be nothing especially remarkable about Bellocchio’s film – to some extent it’s in that venerable tradition of political-exposé suspense dramas pioneered by Francesco Rosi – but in most other regards it truly excels. Bellocchio displays enormous skill in alternating wordy (but always entertaining) courtroom drama with visually vivid, expertly staged scenes of the wars waged by the Mafia rivals (a sequence involving a freeway explosion that destroys a car is one of the most genuinely shocking coups de cinéma in recent years), and succeeds in making a complex, multi-character narrative both lucid and engrossing. The film is also blessed with a superlative lead performance by Pierfrancesco Favino; remarkably, he and Bellocchio manage in the end to make us feel sympathy, even respect, for a protagonist initially presented as monstrously self-centred.

Amazingly, Buscetta proceeds, thanks to his idiosyncratic, archaic notion of ‘honour’, towards an unlikely, improbably moving kind of moral and emotional redemption. That is no small achievement, and it raises the film above mere genre fare to something far more rewarding. A gem.

In UK cinemas from Fri July 24.