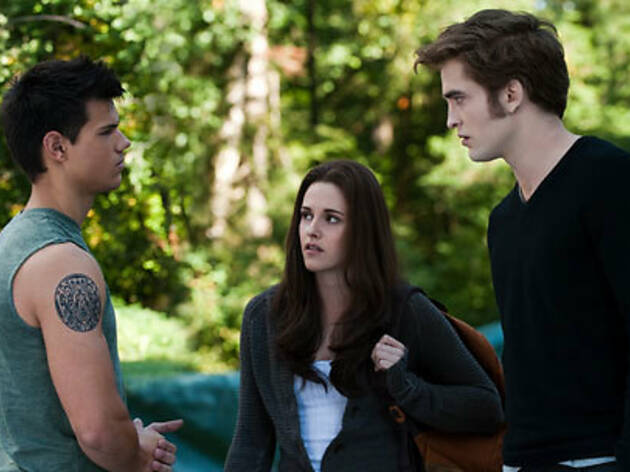 Both casual readers of Stephenie Meyer’s Harlequin-romance-with-fangs page-turners and the Twihards who’ve turned the franchise into a phenomenon will tell you that book three is where things start to get interesting. Armies of “newborns”—freshly converted vamps—threaten the Cullen clan; the werewolves introduced in New Moon establish themselves as a formidable presence; and most importantly, the romantic dilemma at the core of the series finally becomes a proper love triangle. Will our lip-quivering heroine, Bella (Stewart), choose the overprotective, hopelessly devoted Edward (Pattinson) or the Soloflexed, quasi-Neanderthal Jacob (Lautner)? The wan, doe-eyed dandy or the walking, talking trapezius muscles?

Regardless of whom you’re pulling for, this third film installment maintains a sturdier, faster pace than its predecessors while still rewarding its teenybopper disciples with swoony Tiger Beat--worthy moments: Look at Edward, being so sensitive and chaste! Watch Jacob, carrying Bella up a mountainside while shirtless! To say that this is the strongest of the Twilight films, however, is to pay Eclipse wispy praise; viewers who value the little things, such as passable acting and dialogue not stolen from a sixth-grader’s diary, will once again walk away dazed, dumbfounded and partially deaf from all the surrounding squealing. Director David Slade (30 Days of Night) knows his way around an action-horror sequence—dig those bad guys crumbling like plaster statues—yet is at a loss when it comes to the human elements and the achy-breaky heartstring-tugging.

Sure, it may be unfair to ask any director to coax life out of such wooden male leads (the most crucial scene, in which Pattinson and Lautner haggle over a sleeping Stewart while huddled in a tent, is reduced to a jaw-clenching contest). Or, for that matter, to be faithful to the source material’s gooey, pastoral romantic interludes without being forced to replicate karaoke videos and feminine-hygiene commercials. But as a gaggle of other pop-lit movie adaptations have proved, delivering fidelity to the fans doesn’t need to be both a means and an end. You brace for a certain amount of hand-wringing, lip-biting and pinup posing aimed at middle-schoolers; given the way that Eclipse initially suggests a potential for reaching beyond a preteen audience, you just wish the beefcake and cheese didn’t eventually overshadow its better qualities.