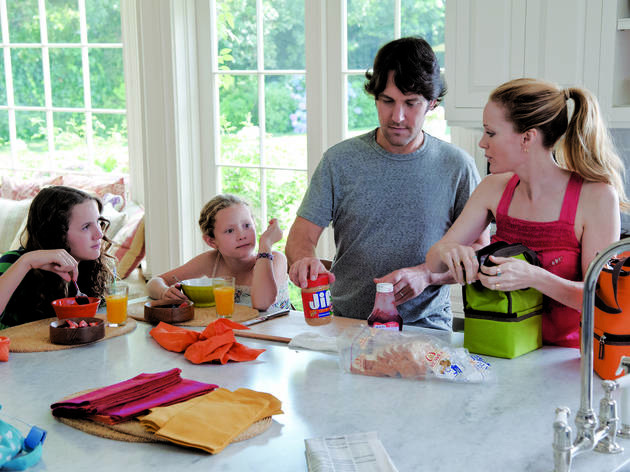 They should invent a new rating for Judd Apatow’s new mid-life crisis comedy. Its 15 certificate doesn’t cut it. What’s needed is a 35 cert and a warning: ‘Contains scenes likely to disturb audiences not yet in their thirties.’ Seriously, watching a married couple having his ’n’ hers meltdowns might be enough to put you off the whole find-a-mate, settle-down shebang for ever.

This is ‘a sort-of sequel’ to ‘Knocked Up’ – the movie that earned Apatow his ‘king of comedy’ reputation. Seth Rogen and Katherine Heigl are nowhere to be seen. Instead, we pick up with Pete (Paul Rudd) and his wife, Debbie (Leslie Mann), in the week they both turn 40. To the outside world, Pete, Debbie and their daughters are living the dream (mansion-sized house, personal trainers, iPhones, iPads, iEverything). Trouble is Pete’s record label is close to bankruptcy (he’s the guy who turned down Arcade Fire, his assistant reminds him). Debbie is in denial, putting the family on a wheat-free, wi-fi-free diet. And they’re driving each other nuts.

So this is 40, is it? Well, for a tiny corner of super-rich Los Angeles maybe. It’s Apatow’s most personal film yet, with an autobiographical edge. What’s more, Mann, who plays Debbie, is Apatow’s wife. Their daughters play Pete and Debbie’s two girls. So you can see why some might think Apatow has gone soft or smug. And you might agree: who cares if Pete and Debbie have to move out of their very big house into a not-quite-so-big house?

However irritating ‘This Is 40’ is at times, there’s a warmth that wins you over, and an honesty about families. In one scene, Pete yells at his wife and daughters: ‘Sometimes I wish just one of you had a dick.’ Apatow also gets in some digs at the new generation’s mid-life crisis toys. Pete is a middle-aged man in Lycra on a bicycle – like those guys who watched the Tour de France last year, spent a grand on a bike and now think they’re Bradley Wiggins.

Its worst crime is its length: ‘This Is 40’ has no business running more than two hours. It’s padded with plots and contrivances, including unnecessary scenes with Pete and Debbie’s dads to explain their hang-ups (we get it: parents fuck you up). As a producer (‘Anchorman’, ‘Bridesmaids’) Apatow’s MO is making funny funnier, amping up the comedy. You wonder if he could have done with someone returning the favour. And the appearance of a new generation of comedy talent in supporting roles – Lena Dunham, Chris O’Dowd (pictured) and Melissa McCarthy – is a gentle reminder that being king of anything in Hollywood isn’t a job for life.