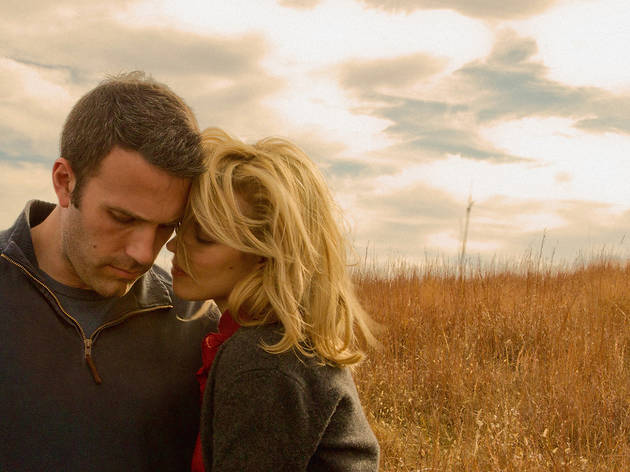 Terrence Malick’s ‘To the Wonder’ is another spiritual inquiry launched by this erratic poet of American cinema from the bosom of an intimate story: here it’s the troubled romance between Neil (Ben Affleck), an American in France, and Marina (Olga Kurylenko), a French-speaking European. Unlike 2011’s ‘The Tree of Life’, this film may not lunge back to the dawn of time for its answers, but it guns for similar Big Questions. Its feet may hover marginally closer to the ground than its predecessor, but it’s also a more aloof, more hollow work.

Whispery voiceovers, magic-hour photography, travelling cameras, short scenes and quick cuts dominate again and offer a fluid, loose sense of time and place. But the thrust of ‘To the Wonder’ is roughly chronological. Neil and Marina’s romance begins in Paris, with an early, enchanting visit to Mont Saint-Michel in Normandy. The pair move to the Oklahoma suburbs with Marina’s young daughter where Neil works as a construction engineer. But the couple have trouble settling. Marina moves away; Neil has an affair with an old friend (Rachel McAdams); Marina returns, but questions of commitment and contentment continue to dog their relationship.

There’s barely any dialogue. Most talk emerges in voiceovers by Neil, Marina and a priest, Father Quintana, played by Javier Bardem. Quintana offers confused Marina some succour, but more crucially his presence helps Malick to frame his debate – already dominated by an interpretation of love as a Garden of Eden awaiting corruption and ideas of good, evil and temptation – more directly in the context of Christian belief. If ‘The Tree of Life’ felt like a deeply spiritual film with nods to the Christianity of its characters, ‘To the Wonder’ operates more clearly within the theatre of Christian thought.

Big events are buried or over quickly and we observe snippets of life from Malick’s perspective as a benign stalker. Repetition and an over-familiarity of Malick’s visual tics and style begin to grate. Neil and Marina’s love is characterised by endless skipping through gardens, fields or parks. Marina is constantly dancing – once with a broom in a supermarket. And endless skies, sunsets seen through trees, hands running through corn fields and spray from garden hoses all begin to feel like parody.

A sterile sheen does the film no favours either: interiors, exteriors, clothes and nature alike feel overly groomed and too neat and clean to be real. As if employing a counterpoint to this glossiness, Malick presents a series of grizzled local characters in Oklahoma – presumably at least some of them non-professionals – and yet their presence jars against the Hollywood finesse and good-looks of his main cast. There’s a phoniness to the film’s people and places that keeps us at a fatal distance from the big ideas with which ‘To the Wonder’ seeks to engage us.