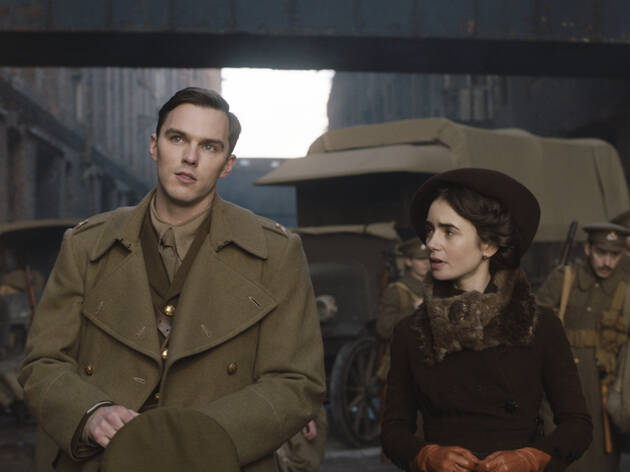 This biopic of the man behind ‘The Lord of the Rings’ grapples for inspiration but comes up empty-handed.

The Tolkien estate has pre-emptively ‘disavowed’ this biopic of fantasy great JRR Tolkien – a fancy way of letting the world know that it was made without any official help and basically boo-sucks to the filmmakers. There’ll be few regrets when its trustees see the finished film. Despite the best efforts of its committed young cast, and especially a game (if suspiciously old-looking) Nicholas Hoult as Tolkien in his late teens and early twenties, it’s a plodding and polite portrayal that holds few surprises.

Don’t come for the orcs and elves, either: ‘Tolkien’ is set long before ‘Lord of the Rings’ and ‘The Hobbit’ were published, with director Dome Karukoski flashing back from trenches of World War I, where Tolkien served, to his Tom Brown-ish school days and a chequered university career that almost ended in ignominy. Instead, he peppers the film with abrupt cutaways to imaginary CGI battles and mythological beasties to foreshadow the tales that will one day make him. None are a fraction as thrilling as the opening moments of Peter Jackson’s ‘The Fellowship of the Ring’.

‘Tolkien’ is as much an origin story for his storytelling skills and genius for inventing languages as a biopic, but this literary foreshadowing is an overplayed motif. From identifying Tolkien’s three hobbit-like school chums as the blueprints for Frodo, Bilbo and co, to linking the horrors of the Great War with the Dead Marshes, Mordor and Middle Earth’s other dark corners, the beats land with the subtlety of howitzer shells.

Sharing screen time is Tolkien’s tentative romance with first love Edith Bratt (Lily Collins, a doppelgänger for the real Edith) – yes, there’s a ring involved, though no volcano – and Collins and Hoult conjure tender and blossoming chemistry. Edith is the first to draw out Tolkien’s talent for storytelling, and the film’s best scene sees her challenge him to ad lib a story when they’re out on a date. With the camera slowly drawing in, Hoult’s shy will-be author initially squirms, before slowly weaving something entrancing in the stiff surrounds of an English tea room. Finally, ‘Tolkien’ conjures something magical to stand with its subject’s own creations. It could have used much more of the same.