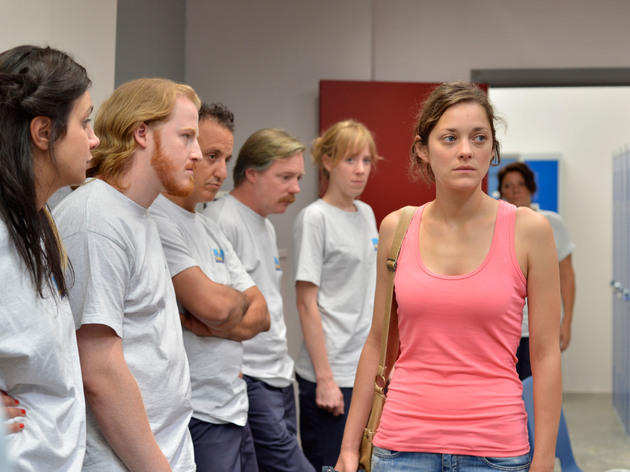 Belgium's Dardenne brothers, Jean-Pierre and Luc, make punchy, contemporary, socially aware films – simple on the surface but alive with compassion and wisdom. As filmmakers the Dardennes are never less than reliable, yet still 'Two Days, One Night' feels like one of their best, up there with 'The Child' or 'Rosetta' in its cast-iron sense of purpose, searing relevance and understanding of how tough it is for all of us, especially the less well-off, to do the right thing in our everyday lives.

It features a career-high performance from Oscar-winner Marion Cotillard – by far the Dardennes' starriest casting to date – and has a starting-gun premise: a young mother, Sandra (Cotillard), recently off work with depression, is made redundant from a small factory that makes solar panels. In her absence, 14 of her 16 colleagues have voted to take their bonuses (around 1,000 euros each) rather than let her keep her job. But willed into action by a supportive husband, Manu (Fabrizio Rongione), she persuades her boss to give her one last chance and to host a second vote round of voting two days later. Will she be able to save her job by knocking on doors over the weekend to persuade her colleagues to support her?

What follows could so easily feel repetitive or like a perfunctory tour of Belgium's working classes as, one by one, we meet these 16 colleagues and their families, hovering on their doorsteps or in their homes. But in the hands of the Dardennes the repetition – the question, 'Will you vote for me?', asked again and again – allows us to see the same situation from a new perspective. It also perfectly suits the Dardennes' unobtrusive, immediate, agile style of shooting as they dash about with Sandra from home to home. With each encounter, each vote shifts from an abstract idea into an opinion that's attached to a life, to a family, to a need to pay for a child's education, to settle the gas bill or, in one case, to buy a new patio. Most importantly, the film involves us: it draws us into the debate, makes us complicit, demands that we have an opinion, and then upends that same opinion a few minutes later. It's engaging and rousing.

Sandra is tired and deflated; it seems her whole body is ready to crumple up. The physical side of the performance is handled brilliantly by Cotillard, who shows Sandra almost losing the power of speech, unable to get the words out of her mouth. The Dardennes show the terror involved in confrontation and taking a stand. We witness a woman fighting not only for her job but in some ways for her life: 'I don't exist, I'm nothing, nothing at all.'

'Two Days, One Night' is also a portrait of love and friendship, and the Dardennes subtly sketch the relationship between Sandra and Manu, as well her friendship with a colleague. Two scenes showing Sandra and Manu, and later Sandra and Manu and the friend, singing along to music while driving stress the power of these bonds better than any words.

This is political drama (with the smallest of p's) at its finest and most humane: heady, engaging, gently ingraining ideas about empowerment, taking a stand and how we organise our societies into the fabric of the film. Each one of Sandra's encounters is a surprise and adds shade or a new perspective to what we think the film has to tell us about human nature and how we live our lives. There are no heroes or villains here; everybody is simply getting by, and by the skin of their teeth. After spending 'Two Days, One Night' in the company of Sandra, you'll be punching the air with pride.