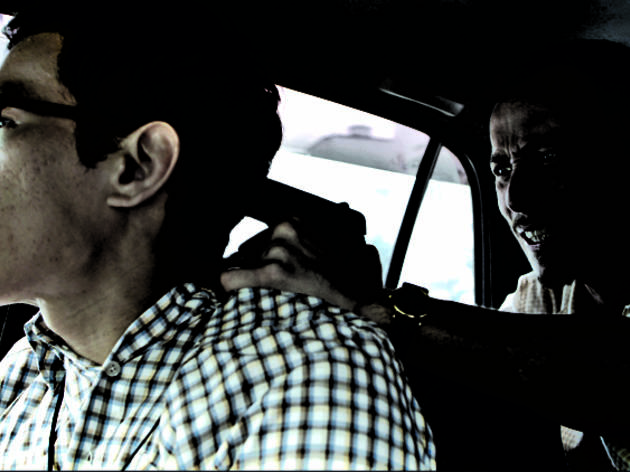 On our way out of the Unlucky Plaza screening at last year’s Singapore International Film Festival, we overheard someone mutter: ‘It’s like a student movie.’ Harsh words, but Ken Kwek’s feature-length debut, for all its pomp and posture, turns out a badly paced clunker whose satire is delivered with the grace of a PAP missive.

Unlucky Plaza is ultimately a hostage thriller: a Filipino man struggles to make ends meet, falls victim to a financial scam, then holds five people hostage for ransom. A race riot later engulfs the city. Xenophobic Singaporeans storm Lucky Plaza – the popular Filipino hangout from which the film derives its name – and go all-out medieval on the mall. You can see where this is going.

And Kwek makes sure you do. He frames the whole plot as a flashback. Right at the start, the lead characters are interviewed about the crisis, months after the fact. But all the non-linear timeline does is dull the adrenaline you’d expect from a thriller.

The film’s comedic elements are its best bits. When Adrian Pang hams it up as an unctuous con artist, when the characters constantly blurt out that high crime is ‘not allowed’ in Singapore, when Onassi the beleaguered Filipino’s day gets more absurd by the hour, the light-heartedness makes for good popcorn fodder. Yet, the giggles are a sideshow, with neither guile nor diegetic force to propel the heavy themes.

To his credit, Kwek is addressing a portentous issue in our city-state. That Onassi is a (conveniently) likeable guy means we root for him over the horde barrelling down the Lucky Plaza aisles – never mind that the racist army holds up a mirror so we can gaze at our own ugliness. As belaboured and on-the-nose as Kwek’s point is, it’s also terrifyingly real. Too bad the message is conveyed with Sesame Street puerility. How do you spell ‘racism’ again?

Director:
Ken Kwek
Cast:
Judee Tan
Epy Quizon
Adrian Pang
You may also like
Popular movies
We know this city. Do you?