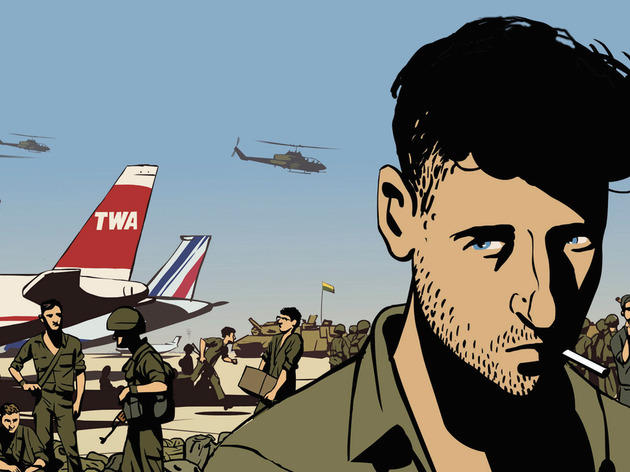 ‘Memory is dynamic… It’s alive.’ This animated documentary, for which Israeli filmmaker Ari Folman ’s wizard colleague, the artist David Polonsky, dazzlingly illustrates talking-head recollections and reconstructions of a past war, comes across like a therapy session made vivid with bizarre, expressionist colours and the jolty, episodic mood of remembrance.

The film is a cathartic trip down memory lane for Folman – only he doesn’t know where he’s going. As a young soldier, he took part in Israel’s 1982 invasion of Lebanon and was in Beirut when the Lebanese Christian militia known as Phalangists murdered 800 Palestinians in the Sabra and Shatila refugee camps – perhaps with the approval of the Israeli army. It was a massacre that caused Ariel Sharon, Israel’s defence minister, to resign from his post when an inquiry found him indirectly responsible for the deaths.

Then and now, Folman puts himself centre-stage – which means he’s always dancing on the edge of self-indulgence. It’s a game that neatly frames a ramshackle tale but also grates the more it’s emphasised. Now in his forties, this urbane, bearded character visits other lucid contemporaries to hear their versions of the experience they shared. There’s a guy living in Holland who’s made a fortune selling falafel. There’s the war correspondent Ron Ben-Yishai, who marched gung-ho, John Simpson-like into Beirut. There’s a guy whose talk is oddly associative: he talks of the patchouli scent, a sort of aftershave, that everyone was wearing at the time of the war. For him, like Folman’s inability to remember much at all, it’s the lasting gift of the conflict.

Presumably Folman filmed all these interviews, later animating them with the events of which each interviewee speaks, so blurring the line between fact and fiction and stressing the power and failings of memory. But take away the unusual form of illustration and the model is that of a traditional, flashback-driven, dramatised doc. In fact, the animation is the film’s strength: it’s revelatory, from the portrayal of dreamy, gold-and-black-coloured episodes of soldiers bathing in the sea with distant flares lighting up Beirut to more realist depictions of death such as when a soldier driving a tank suddenly takes a fatal bullet.

It’s this sort of erratic, ground-level experience that Folman focuses on the most; even the facts of the massacre take a back seat. He wants to show war as ridiculous, and his concern for the horrors and absurdities of battle feels fresh and affecting.

And yet, despite the grim subject, this is a beautiful film. A paradox? Only if you expect coherence – and ‘Waltz with Bashir’ is anything but coherent, and pointedly so. It’s recollection refracted – and then some. It’s messy and unusual, not always gratifying, sometimes frustrating, always compelling.