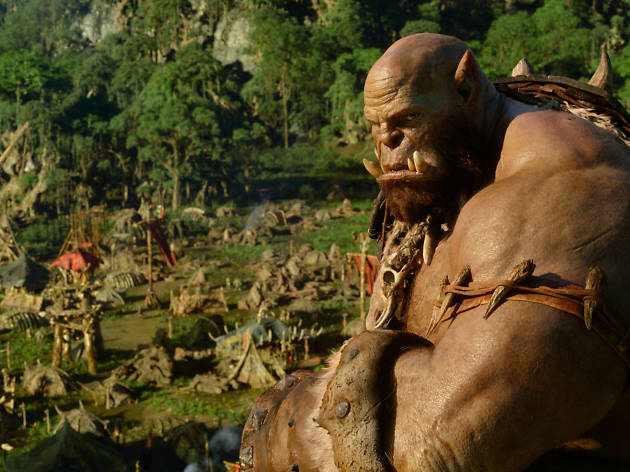 The role-playing video game ‘World of Warcraft’ was a clunky Frankenstein thing, cobbled together from the most obvious parts of countless fantasy franchises. So a certain level of respect is due to ‘Moon’ director Duncan Jones for attempting to inject new life – and a hint of relevance – into this tired, so-last-decade concern. Sadly, his best intentions aren’t enough: like its ten-foot anti-heroes the orcs, ‘Warcraft’ is noisy, lumbering and not terribly bright.

Much of the problem lies with the cast – Travis Fimmel is a walking charisma void as strapping warrior Anduin, a sort of Aragorn without the personal charm (Aragormless?). He’s the land of Azeroth’s best hope against those murderous, dimension-hopping orcs, and he’s backed by a plucky band of equally forgettable white dudes with bad hair: Dominic Cooper as well-meaning dullard King Llayne, Ben Schnetzer from ‘Pride’ as trainee wizard Khadgar and Ben Foster, totally misused as the magical Guardian.

Their snaggle-toothed orc foes have a touch more personality: despite being buried under layers of CGI, Toby Kebbell gives real warmth to Durotan, the chieftain for whom randomly massacring humans doesn’t always guarantee a good time. He also embodies Jones’s most interesting and tricky conceit – that newcomers to your land might not all be there to wreck the place (though, the film implies, most of them probably are).

The total absence of originality here is notable, but it needn’t have been a problem: with a tighter plot, a touch of humour and some peppier, less slab-fisted action scenes this might actually have worked – a kind of ‘Guardians of the Galaxy’ meets ‘Lord of the Rings’. But ‘Warcraft’ is content just to trundle along at its own, ponderous pace, chucking in dwarves, spells, love scenes, giant eagles, clay monsters, silly names and battle scenes seemingly at random. Fantastical, perhaps, but far from fantastic.