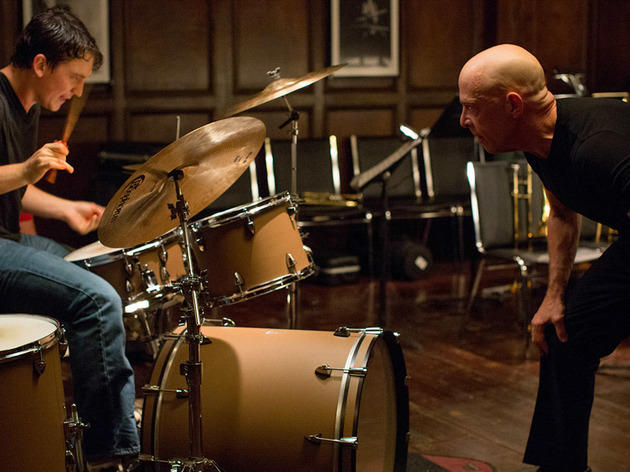 Part of the joy of watching dramas like this must be a masochistic thrill in seeing young hopefuls suffer: drumming student Andrew (Miles Teller from ‘The Spectacular Now’, fully convincing) is nearly destroyed by this monster, a barking man who’s impossible to please. Yet even though our hero’s knuckles bleed and his snare gets spattered, you think: that’s some truly glorious noise he’s making. The discipline and beauty of bebop has never been better served by a film.

‘Whiplash’ might have followed this trajectory to a feel-good destination, one involving a recital, some proud parents and a teary hug. But that’s not where the young American writer-director Damien Chazelle wants to go – and bless him for it. Fletcher’s put-downs become more vicious (and riotously un-PC), the drive to perfection turns Andrew into a bitter, uncaring boyfriend, and the plot’s tone nears that of a thriller, sometimes awkwardly.

Credibility becomes shaky: will a violent car crash prevent Andrew from staggering to the gig in a concussed delirium? Don’t ask. Disappointing Fletcher is too terrifying a prospect. But there’s also unusual, spiky attention paid to the pursuit of excellence, as Andrew begins to resent the mediocre achievements of his family. By the end, he’s an arrogant, cymbal-smashing machine.

How breathtaking it is to see a story go there. The identity this teen chases after is a lonely one, but it’s impeccably on the beat. Real art, the movie suggests, isn’t for those who merely hope to do a ‘good job’ and please themselves. ‘Whiplash’ explores the outer reaches of crazy passion. It never apologises. And the flurry of drumming it ends with – Teller’s solo is staggering – is both a magical cacophony and, obliquely, a door slamming shut. I don’t know if I'd show this film to a curious young person, not unless you’d ever want to see them again. They’d be in their room, practicing, forever.