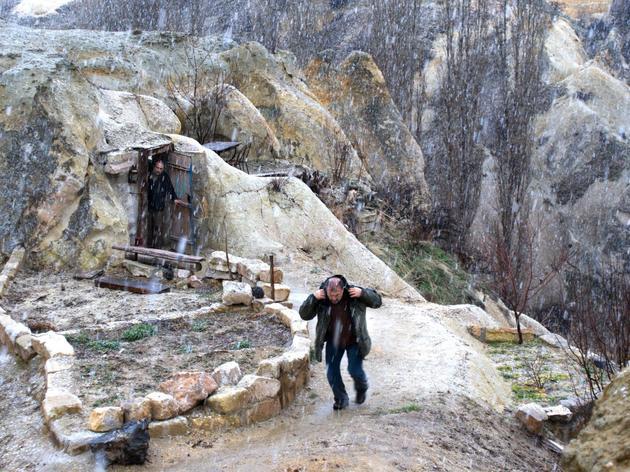 Like his last film ‘Once Upon a Time in Anatolia’, Nuri Bilge Ceylan’s ‘Winter Sleep’ unfolds before the epic backdrop of Turkey’s rural steppes, an already unforgiving landscape now made even more alienating by snow, ice and wind. But while that film, an existential murder mystery, was a patchwork of silence and extraordinary images punctuated by pointed chat, here talk is the order of the day.

‘Winter Sleep’ gives us a few days in the life of Aydin (Haluk Bilginer), a hotel owner and landlord in a remote Anatolian community where houses are carved into rock. Aydin’s relationships with his young wife Nihal (Melisa Sözen) and sister Necla (Demet Akbag) are troubled – he seems to have a better rapport with the Japanese guest with whom he has a stuttering chat in English about the merits of wasabi. Aydin is a one-time actor, a sometime newspaper columnist and one day hopes to start writing a history of Turkish theatre. He’s restless and unsatisfied and everyone else just has to put up with it, including Hidayet (Ayberk Pekcan), the man he employs to look after his tenants.

Aydin is a reluctant boss, having inherited his property and power from his father, yet he has clearly stirred resentment among the people in whose lives he has a stake – something we witness early when a boy chucks a stone at his car. Aydin may be reluctant, but he also exercises power with ease, going through a hand-kissing ritual with the offending boy and, in perhaps the film’s most powerful and successful scene, demonstrating an ugly dominance of his wife.

This story, with its weary evening conversations, creaky and outdated hierarchies, familial discord, inherited pain and a longing for the city and high culture, owes an enormous debt to Chekhov (he’s thanked at the end). However, at its heart is something to which Ceylan keeps returning in films: a portrait of a restless, difficult man who feels out of time and place, and whose behaviour does him no favours (a character familiar from almost all his work, not least ‘Uzak’, 2002, and ‘Climates’, 2006).

At over three hours and constructed largely of a series of conversations between Aydin and the other main players, ‘Winter Sleep’ is certainly the most challenging of Ceylan’s films so far. It can feel surprisingly earthbound, theatrical and even rambling, even if it offers plenty of ideas to do with the axes of power among couples, families and communities. That said, when the film gets outdoors, it soars, and Ceylan continues to dig with acute intelligence into the dark corners of everyday human behaviour.

'Winter Sleep' is likely to disappoint those with a strong attachment to some of Ceylan's earlier films. Undoubtedly he has retreated even further from the heightened imagery of 2008's 'Three Monkeys' (and his own, remarkable still photographs) to give us a drama that's less visually arresting and more interior, room-bound and anchored in conversation. At least twice, characters mention the role of 'soap opera' in their lives, and it feels as if Ceylan has set himself the challenge of writing a more talky, domestic drama without losing the wry observation and mystery of his earlier films; if so, he only half-succeeds.