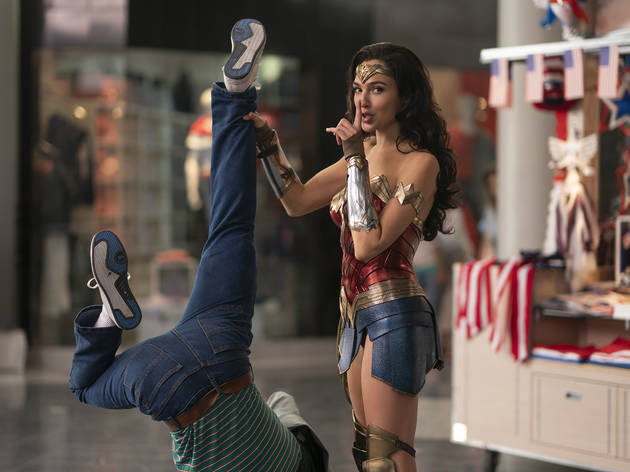 Like a neon-glowing antidote to all the slate-grey solemnity in Tenet, this wildly overlong but enjoyably propulsive and refreshingly kind-hearted Wonder Woman sequel arrives at the ash end of an exploding cigar of a year to remind us that: a) blockbusters still exist, and b) they can be actual, you know, fun.

The latter is mainly down to Gal Gadot, again showing what a brilliant bit of casting she is as DC’s Amazon demigoddess Diana Prince. She develops new Wonder Woman superpowers here – including the ability to rise above ropy dialogue with élan – and brings a glow of warmth to a franchise whose straight-arrow moral centre again takes equal billing alongside its splashly set-pieces.

Director Patty Jenkins wastes no time in launching into one of them: a flashback to a young Diana (Lilly Aspell) taking on older rivals in a kind of supersized Themysciran version of Gladiators. She cheats and learns the hard way from mum Hippolyta (Connie Nielsen) that ‘no hero is born from lies’. It’s such a cracking piece of widescreen action that you’re okay with the broad character development at the finish line.

The moment sets up the real battle to come: a struggle between truth and lies that plays out in ’80s Washington DC. It’s a world of spandex, fanny packs and inappropriate men that Diana is already inured to by the time we catch up with her. She’s working at the Smithsonian Museum by day and moonlighting as Wonder Woman to interrupt robberies, save falling brides and generally keep the city’s nose clean.

Then a quartz-shaped McGuffin pops up in the possession of klutzy archeologist Barbara Ann Minerva (Kristen Wiig) at the museum and her Wond-ey senses start tingling. It turns out that its powers include an Aesopian ability to make the wishes of anyone who touches it come true. Cue a triangle of wish-fulfilment: Diana unwittingly summons back her long-dead pilot boyfriend Steve Trevor (Chris Pine, likeably riding side-saddle again as the Peggy Carter to Diana’s Captain America); Barbara reinvents herself as an agent of female vengeance; and megalomaniac TV personality Max Lord (Pedro Pascal, all unctuous smarm) goes bigger, and eviler, than both of them.

As befits a movie set in Washington, Wonder Woman 1984 is unafraid to get political – the main villain is, after all, a wall-building TV personality and failed businessman with bad hair – and it also offers some peppery commentary on sleazy-but-sad blokes. But despite all that female-first storytelling, Wiig is still left short-changed in her transformation from chew toy to supervillain. Even at 151 minutes, the film struggles to juggle its two villains (three, if you include the fanny packs) and squeeze in the Diana/Steve romance.

Still, Pascal provides the best DC villain in ages – even calling to mind Pacino’s sweatiest moments in Scarface as the film spirals into the usual overplotted third-act maelstrom of climactic fights and stuff blowing up. Gadot brings new shades to a superhero you might assume had shown her true colours already. An aching sense of vulnerability and loneliness only makes the fist-punching heroics soar that bit higher.

Sure, it gets a bit silly towards the end, and the promised post-credits scene is for the truly dedicated. But in a year when the cinemagoing experience could be categorised as ‘much too little’, you can’t really blame it for giving us a bit too much.

In UK and Australian cinemas Wed Dec 16. In US cinemas and on HBO Max Dec 25.