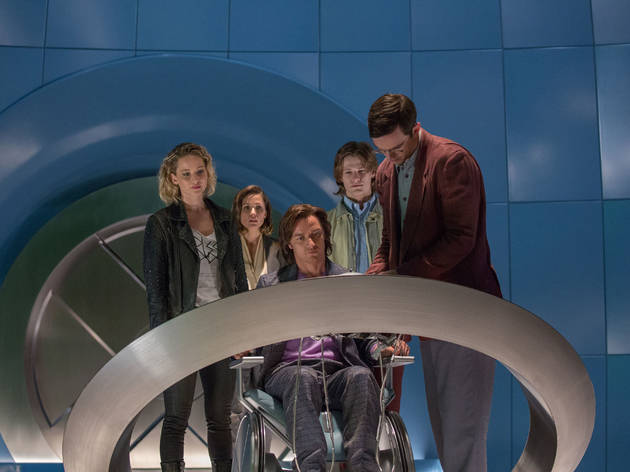 The new 'X-Men' movie is pitched squarely at forgiving fans. Others will balk at the confusing script and unimpressive action

There’s a wince-inducing scene in the middle of ‘X-Men: Apocalypse’ that says just about everything you need to know about this sprawling superheroic mess. It’s 1983, and a group of teenage mutants walk out of a screening of ‘Return of the Jedi’, arguing like middle-aged film critics. One comments: ‘But third movies are always the worst.’ So that’s a dig at the third original ‘X-Men’ flick (2006’s ‘X-Men: The Last Stand’). It's also a self-aware nod to this movie’s own place as the third ‘X’-prequel and a bitchy reference to another nerdiverse, all in one smirking, throwaway line. And if you don’t get all three, you may as well get up and leave.

The plot is as old as the Pyramids, quite literally: in ancient Egypt, original mutant and marauding rage-smurf Apocalypse (Oscar Isaac) is betrayed and buried under a thousand feet of rubble. Millennia later he’s revived (apparently because someone leaves a door open) to wreak havoc on humanity once again. It’s up to Mystique (Jennifer Lawrence), Professor X (James McAvoy) and a frankly ludicrous number of supporting characters to put an end to his evil scheme.

And that’s really it: there are no surprises or switchbacks here, just a seen-it-before world domination plan carried out by a petulant Pharaoh with a head like a chewed pencil, and resisted by a bunch of interchangeable, Lycra-clad goody-goodies whose names and superpowers you’ll quickly stop trying to keep track of. There are standout performances – Sophie Turner (aka Sansa Stark) works hard as doomed psychic Jean Grey and Michael Fassbender’s bristling Magneto is always a pleasure, even if his character motivation is rather crass (a visit to Auschwitz is particularly ill-judged).

There are no memorable action scenes – the closest we get is a virtual rerun of the time-freeze sequence from the previous movie. And the script is just nonsense, comprised entirely of sarcastic asides, portentous gobbledygook – ‘the dawn of a new age will rise!’ cries Isaac – and insider references that only the faithful will appreciate. Unless that’s you, it’s probably best to stay clear.