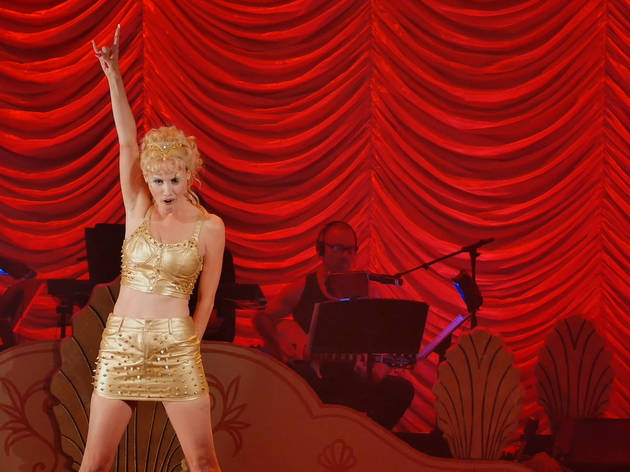 Searching for hidden depths in ‘Showgirls’ might feel like going deep sea fishing in a puddle, but this fun, likeable doc makes a decent case for a reappraisal. Twenty-five years after Paul Verhoeven’s infamous 1995 flop stunned critics (not in a good way), left moviegoers cold and put its star’s career on ice for good, ‘You Don’t Nomi’ pens a not entirely uncritical birthday card to a movie once derided as ‘‘‘All About Eve’’ in a g-string’. It’s the kind of doc we could be watching about ‘Cats’ in 25 years time: a post-mortem of a movie that’s so mind-boggling, you have to wait for the shock to wear off to digest exactly what it is.

‘You Don’t Nomi’ kicks off with a reminder that ‘Showgirls’ had real buzz when it came out. It reunited the team behind hit thriller ‘Basic Instinct’ – screenwriter Joe Eszterhas, Hollywood’s ‘swami of bad taste’, and big-hitting director Paul Verhoeven – and boasted a fresh-faced star in ‘Saved by the Bell’s Elizabeth Berkley as a young ingénue heading for Vegas to make it big as a showgirl. But as she – and audiences – soon discovered, it turns out to be home only to broken dreams, terrible dialogue and almost no underwear.

‘Showgirls’, the doc argues, turned out to be the ultimate ‘masterpiece of shit’: a trashy, sexist, male-gazy fever dream that Verhoeven directs at such an hysterical register that Berkeley’s character – Nomi Malone – seems to yells her way through even the most basic conversations. So why are we still talking about it a quarter of a century on?

Picking the brains of superfans and cultural commentators (though not director or cast members), director Jeffrey McHale does a nice job charting its unexpected evolution into a cult hit in the drag community to rival ‘Mommie Dearest’ and ‘Valley of the Dolls’, as well as a tongue-in-cheek LGBTQ+ favourite. ‘For those who get it, it's kind of a religion,’ explains Peaches Christ, a drag performer who hosts sold out ‘Showgirls’ nights in San Francisco. Sure enough, the cult screenings have an almost pentecostal fervour as acolytes gather to worship at the altar of Ver-sayce.

Cleverly, McHale injects ‘Showgirls’ into clips from other Verhoeven films to show that, far from being a kitsch outlier in the filmmaker’s career, it’s bristling with the Dutchman’s favourite tropes and themes: female nudity, rape revenge fantasies and some very male ideas of what it is to be a strong female character – they’re all in ‘Showgirls’ and they’re all present in the likes of ‘Elle’, ‘Black Book’ and, of course, ‘Basic Instinct’ too. ‘You Don’t Nomi’ doesn’t quite paint Verhoeven as the bad guy – we see him good-humouredly collecting the Worst Director Razzie – but it does show how his missteps cost Berkley her career. It’s another reminder of how much more forgiving Hollywood is of established male directors than its young starlets.

Perhaps hampered by the lack of interviews with director and cast, ‘You Don’t Nomi’ is less convincing in building a case for ‘Showgirls’ as a piece of cinematic art. There’s a gesture at defending its craft that boils down to some examples of clever framing and some mirrors, but it’s all pretty gestural. The case for re-evaluation here is cultural rather than critical.

Even so, it’s an exuberant and often very funny watch: an affectionate laugh track of sorts for a movie memorably described by film writer and ‘Showgirls’ devotee David Schmader as ‘the kind of comedy you can’t make on purpose’.

Available to stream in the US and UK on Fri Jun 12.

Director:
Jeffrey McHale
You may also like
Popular movies
We know this city. Do you?