Blur on healing rifts, teenage fans and ‘The Magic Whip’

Blur are back and on the form of their lives. Ahead of their massive gig in Hyde Park this weekend, Time Out catches up with Damon, Graham, Alex and Dave

‘The thing is,’ Alex James says, leaning in, ‘I should just never have been photographed standing next to Jeremy Clarkson.’ It’s 1am outside a Marriott hotel in Glasgow and, bottle of champagne in hand, Blur’s bass player is telling me why The Guardian hates him. Later, when he turns in, he’s planning to proudly flout the hotel’s no-smoking rule, which comes with a £150 fine. Apparently it’s only £30 in Wolverhampton.

It’s easy to take the piss out of Blur. The press have been doing it since Britpop: boiling down their four personalities to the point where James is a libertine, Damon Albarn is arrogant, guitarist Graham Coxon is withdrawn and drummer Dave Rowntree is simply quiet. But, as their song says, ‘There must be more to life than stereotypes’ – and so it is with Blur.

What’s rarely mentioned is that they’re completely and utterly on fire at the moment. The lunatic reception that greets them tonight at Glasgow’s Barrowlands – a warm-up show before they tackle a headline gig at British Summer Time in Hyde Park – is proof. Albarn is performing like the apocalypse is coming, jumping out of his skin to entertain on new songs like ‘Go Out’, while Coxon makes the whole crowd gasp by repeatedly hurling his guitar in the air during the last, agonising moments of ‘Beetlebum’. Right now, Blur are as good as they’ve ever been.

Not only have the band never sounded better, their audience is growing, and not just older. As well as being a triumph, this year’s surprise new album ‘The Magic Whip’ has stopped Blur becoming merely nostalgia-peddlers. No retread of past glories, it’s fresh and original. Maybe a bit wiser.

This is a band that has come through break-ups, addiction, public humiliation and a recent toe-clenchingly awkward sit-down appearance on ‘The Graham Norton Show’ with remarkable ease and a genuine fraternal love for one another. But ask them what keeps Blur going, and you can see why the media finds them such contrary buggers…

What keeps you together?
Damon: ‘Spending as much time as possible apart from each other.’

The new record is great. Has making and playing it brought you closer again?
Damon: ‘I feel that what we started in 2009 as a sort of public way of repairing aspects of our relationship is now complete with this album. There isn’t that tension within the band any more. It’s a very specific kind of chemistry that the four of us have.’

Alex: ‘It must be really weird to spend your whole life defined by something that happened to you when you were young. It happens to sportsmen. I thought I’d played my last Cup Final.’

Graham: ‘Whatever you say about it, it’s magic to make people jump around and smile. The only time it goes wrong is when you think: Graham, you’re 46 – you look slightly ridiculous.’

Do you still get nervous ahead of big shows like Hyde Park?
Damon: ‘Not nervous. It’s more about being physically fit enough to do it as it needs to be done. Before 2009, I was heavier. I’d been doing Gorillaz and it hadn’t been necessary to be very public. I wasn’t overweight, but I was a couple of sizes bigger than I am now. Since then I’ve trained constantly – a whole variety of things from boxing to cycling.’

Hyde Park’s becoming your second home. You’ve already recorded two live albums there.
Alex: ‘Well, there’s particular resonance with Hyde Park for Blur, because of our connections with London. Blur are the quintessential London band, really. It’s only recently that I’ve realised how blessed we are in England, a tiny fucking country, to have one of the best cities in the world. Anything can happen to you in London. Graham was the first person I saw when I arrived: that’s the absolute truth. The best guitar player of a generation, getting out of his parents’ car.’ 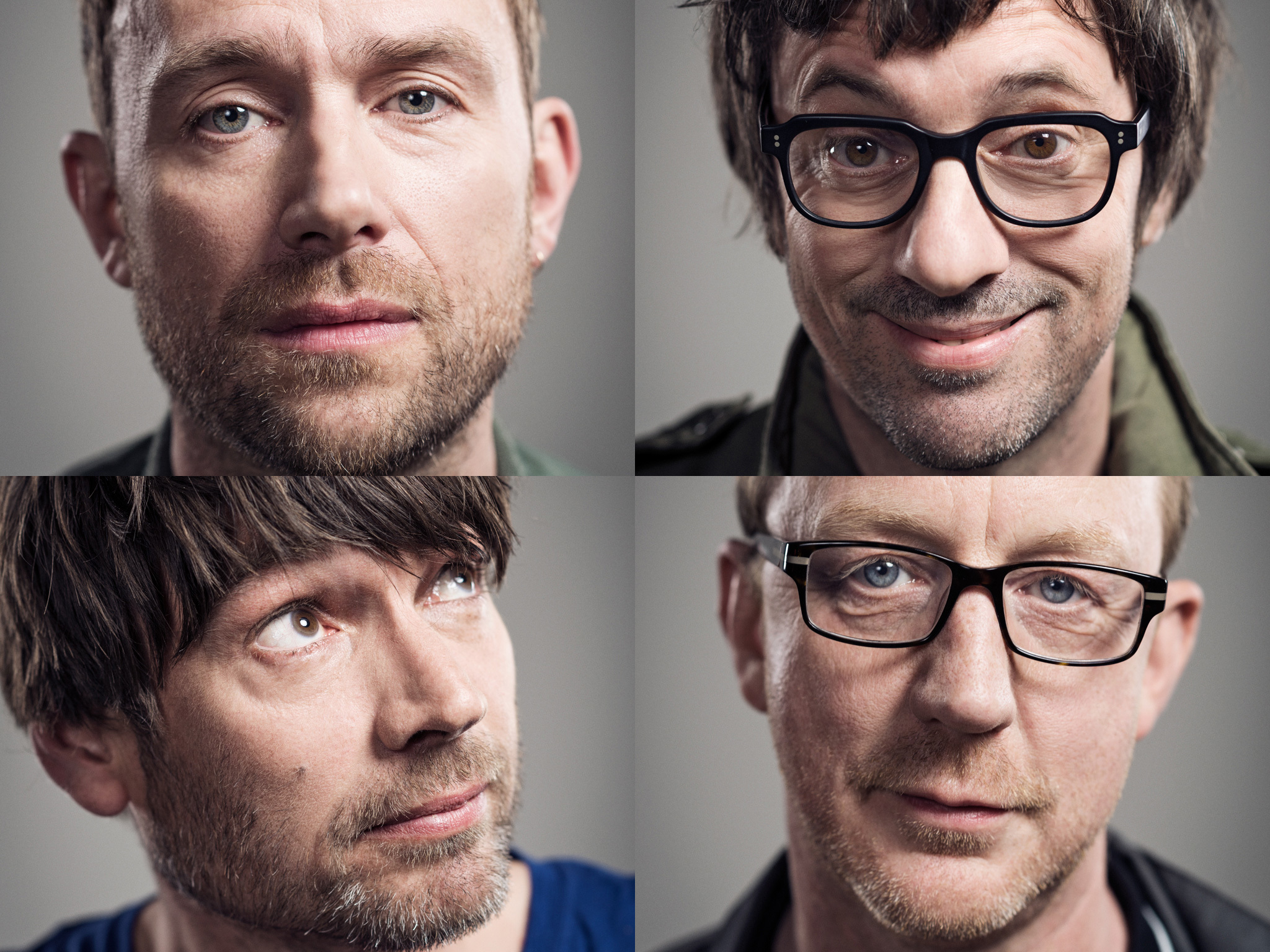 Graham took the lead in putting this new record together. Was it hard to hand over control to him, Damon?
Damon: ‘No, I was delighted. I thought it was a fantastic opportunity for Graham to really reinstate his position, which – as far as I was concerned – was as my partner-in-crime in Blur. We essentially started the band together at school. For “The Magic Whip”, we just did 40 hours of recording in Hong Kong over five days. Then I abandoned it, essentially, and it was only because of Graham’s dedication that it was crafted into a record. Then obviously I had to take charge of it again…’

But it seemed from your slot on ‘The Graham Norton Show’ the other week that you’re really keen to take a back seat in the band these days. You barely said a word!
Damon: ‘Well that was fucking hilarious. Because the stars from “X-Men” or whatever it was [‘Avengers’, in fact] were delayed because of their premiere. I put my feet up after our performance, had a couple of drinks and watched the football until suddenly they were like: “You’re on telly again.” When I got on to the couch I realised that I was drunker than I thought I was, and was sweating. Noel [Gallagher]’s really good in those situations. However awkward, he can always conjure up something that dissipates any tension. Whereas I just absorb all the tension and manifest it until it gets more awkward. I should never do light entertainment.’

Despite TV clangers, your popularity never seems to wane. You’ve got a whole new generation of fans now, too.
Graham: ‘Wherever we go in the world, it’s like they’re still there: they’ve sort of been cryogenically stored and rolled out again. But it isn’t: it’s people that are 20 years younger who have discovered the group and like it.’

Damon: ‘Maybe it’s because we disappeared for a decade, so we were frozen. There’s a good balance: in some parts of the world it’s exclusively teenagers.’

Alex: ‘I think that was part of why we thought: Well, maybe we’ve actually still got something to say.’

Alex, you’re a father of five. Do you shudder if any of them say they want to be a rock star?
Alex: ‘No, it’s not the worst thing they say. One of the boys taught the youngest one to say: “I’ll bite you on the penis”, so we’re having to deal with that at the moment. She’s three. It’s actually really funny when she says it.’

Are they embarrassed about you being in Blur?
Alex: ‘They’ve had to live with cheese for ten years, so no.’

Speaking of cheese, why do you think we have become such a nation of foodies?
Alex: ‘I think the ’90s was the art decade. At the start of the ’90s, modern art was a joke: “art” was written in inverted commas. But by the end of it, Tate Modern was the most visited tourist attraction in the country. The last ten years have been all about food. British chefs are more celebrated around the world than British rock stars. They’re having it away. I did a TV show a couple of weeks ago with a chef who had been up for four fucking days and they went on telly and nailed it.’

Damon, you’re premiering your ‘Alice in Wonderland’ musical soon. And Dave, you’re a lawyer. How do your employers feel about you dropping everything to be rock stars again?
Damon: ‘Well, “Wonder.land” is a nightmare at the moment. [Director] Rufus Norris had to miss a rehearsal yesterday because he was at the Tonys. I’m really excited about it – it’s very ambitious and the costumes are insane. I just hope that we get enough done in time.’
Dave: ‘I have to bribe them with guestlist tickets.’

Finally, can you pinpoint exactly when you became an adult?
Dave: ‘About 40, probably, when the band wound down. There’s no sense in which being an adult is compatible with 100,000 people having bought a ticket to see you and somebody walking around behind you asking: “Do you want a dessert?”’
Damon: ‘It’s questionable whether I am an adult.’

‘The Magic Whip’ is out now.