Marilyn Manson interview: ‘I just think you have to be astonishing’

In 1996, the release of Antichrist Superstar turned Marilyn Manson—both the band and the man behind it—into a household name. As infamous for his nihilistic, hedonistic brand of pop satanism and black metal meets mall-goth visual aesthetic as for his campily bombastic industrial rawk, the Trent Reznor protégé (real name: Brian Warner) thrived on giving hell to the Christian right and provoking a mainstream still dominated by MTV. But in recent years, Manson has mellowed. Last year, for example, the once-unshockable 46-year-old quickly dissociated himself with a leaked Eli Roth featuring his music and depicting the staged rape of Lana Del Rey by the filmmaker. And by Manson’s own admission, his more recent music had lost some of its bite. But now he’s back with The Pale Emperor, his glitter-rock-ish best album in years, and the Hell Not Hallelujah tour, which brings a bit of creepiness to the barren January NYC concert calendar when it hits Terminal 5 January 29.

What does The Pale Emperor represent for you at this stage of your career?
It represents a return to form. Being that I used the metaphor of Faust on the record a lot, I think this record is me paying back the devils—whether they’re my own devils or the people that I sold my soul to, to be who I am.

You can definitely hear its influence on this record. Yet blues is a very spiritual music, which is almost the antithesis of what Marilyn Manson is about.
Well, I guess religious would be the antithesis of what I’m about more than spiritual, because I think that’s where I find spirituality, is in making art, and I find most of my power in singing it. I really enjoyed being a singer on this record, and a lot of the vocal takes were first [takes]. Of course, we embellished upon [the songs], but the core of each song is that first impulse. There’s a real certainty to it. If I didn’t like a take, I would start again from the beginning again. It wasn’t made in pieces; it had to be live. Sometimes, I would have people in the studio sit and watch the song form in front of me, because that brought out the performer in me, and it brings out a different type of swagger and confidence that’s hard to get in a studio.

You mention confidence, but at the same time, I think there’s a real vulnerability to this record. You listen to “Odds of Even,” and it seems you’re very aware of your own mortality, maybe more so than you ever have been before.
Yeah, my mother dying during the making of the record probably put me in touch with that. And acting on Sons of Anarchy, I don’t know—maybe I stepped out of myself. But I completely think that I exposed my nerves.

In “The Mephistopheles of Los Angeles,” you sing: “I don’t know if I can open up / I’ve been opened enough.” How difficult was it to make this album?
I found it pretty easy to make. In the past, it would be like pulling teeth to get me to go to the studio. If I was supposed to go at 8pm, I’d show up around 3am, when they were closing. But in this case, I woke up, and I wanted to go to the studio immediately, and I’d go at around 4pm. So a lot of times when I was singing, the sun was still out, and by the time I finished, the sun had set. I used to think that my most creative time was at 3 in the morning, but I realized that 3 in the morning is the time when my brain won’t stop spinning if I haven’t accomplished what I wanted to do that day. I’m a night person, but my brain doesn’t function best at any certain time. It just functions best when it’s doing what it wants to do, and in this case, it was music.

I read recently that you toned down the drinking to allow your brain to do that.
I still drink, but you drink when your job’s over, not so much when you’re doing your job. But I think mainly I became more of a pothead. I’d never really understood the concept of listening to music while smoking pot—you know, the classic rock & roll cliché. I’d somehow avoided that my entire life. I suppose I went backwards through the gateway drug.

This tour is called the Hell Not Hallelujah Tour, so you’re still obviously rallying against religion.
It’s Flannery O’Connor–inspired. Flannery O’Connor wanted to have the holy Christ revival without Christ. It’s my way of saying that anything is as religious as you want it to be. So it’s really not so much railing against God or Christianity as it is presenting both sides of it. The show itself and the musical selection is going to be both sides of the Delta blues, the dark side and the snake-handling creature side as well. You have those people dancing around in Santería with chickens who have their heads cut off, and you get people in church towns holding snakes. There’s not that big a difference between the two, if you think about it.

With that in mind, how difficult is it for you to shock people nowadays? The world’s changed a lot since, say, Antichrist Superstar came out.
It’s in the very nature of the name Marilyn Manson—there’s nothing that can be shocking in a world where people are equally famous for being a murderer and for being a movie star. I just think you have to be astonishing and you have to be powerful and be confident to be what you’re going to be and do it well. Confidence and the decisiveness of who you are and sticking to whatever that might be and being willing to fight for it also. You’ve got to be willing to die for it or kill to protect it. Stay out of jail, that’s all!

You just turned 46. How does getting older affect what you do and change the way you approach your music?
I don’t know if it’s a form of synaesthesia, but I see numbers farther and farther away than I do in a square like a calendar. Time I usually judge by whether the sun’s up or not. I think not having the weight of age really helped me. It’s lessened the concern about it and, surprisingly, the damage I’ve done to myself. I think I have the same vitality, maybe even more, as I did when I was 23. I’m sort of trapped in the same age. The time that’s flown by in between doesn’t really register to me. Even when you point it out, it doesn’t. 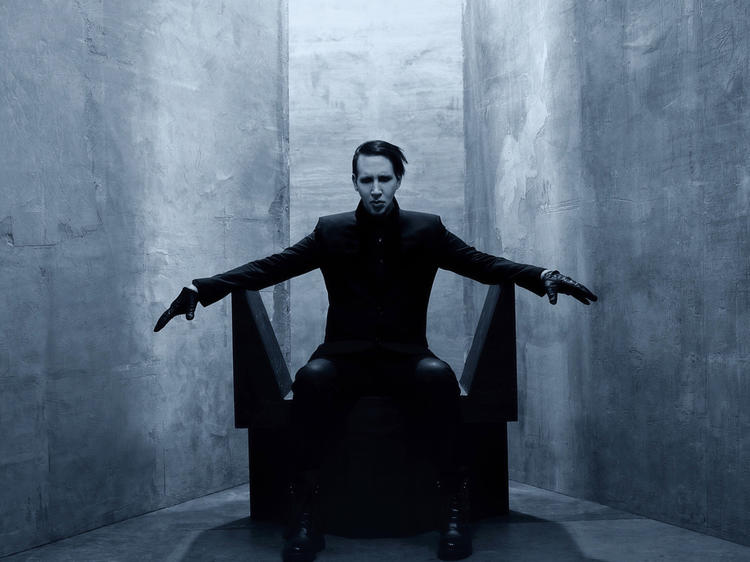 The shock-rocker and his crew headline Terminal 5 with a new album, The Pale Emperor, in tow.