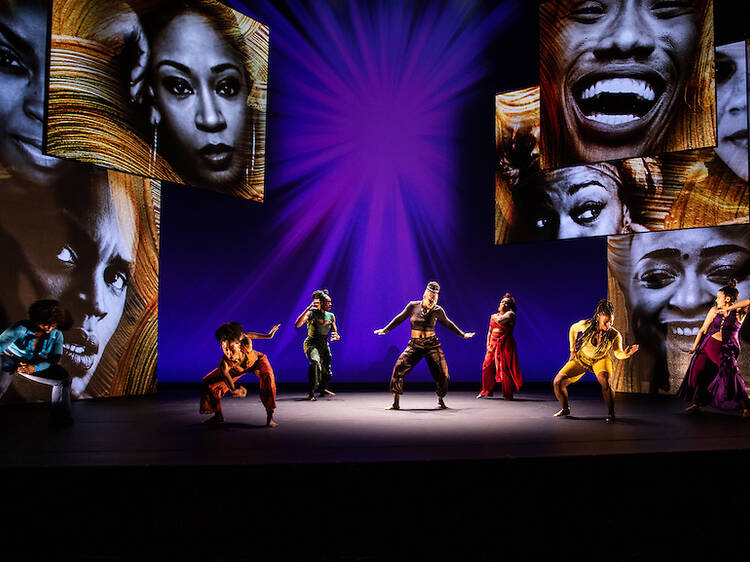 Broadway review by Melissa Rose Bernardo After for colored girls who have considered suicide/when the rainbow is enuf received a beautiful (if bursting-at-the-seams) 2019 revival at the Public Theater, where it played in 1976, how fitting that Ntozake Shange’s theatrical tone poem should now circle back to Broadway’s Booth Theatre, to which it originally moved and ran for nearly 750 performances. The first voice we hear is Shange’s own. “Imagine all the stories we could tell,” she says in a recording, “about the funny looking lil colored girls, and the sophisticated lil colored girls, and the pretty lil colored girls…the ones just like you!” Poet-playwright-dancer Shange—who originated the role of Lady in Orange, one of the show’s seven color-coded characters—died in 2018, but this rousing revival testifies to the magnitude of her imagination and the unyielding power of the female voice. Almost from the start, the show is in constant motion. “We gotta dance to keep from cryin,” says Lady in Yellow (D. Woods); “we gotta dance to keep from dyin,” echoes Lady in Brown (Tendayi Kuumba). The staging by Camille A. Brown (Once On This Island) takes those words to heart, stopping the flow only to underscore the text’s most serious moments, such as a still on-point sequence about “latent rapists.” Brown choreographed the Public version, which was helmed by Leah C. Gardiner; with this production, she becomes the first Black woman to direct and choreograph a Broadway show since Katherin 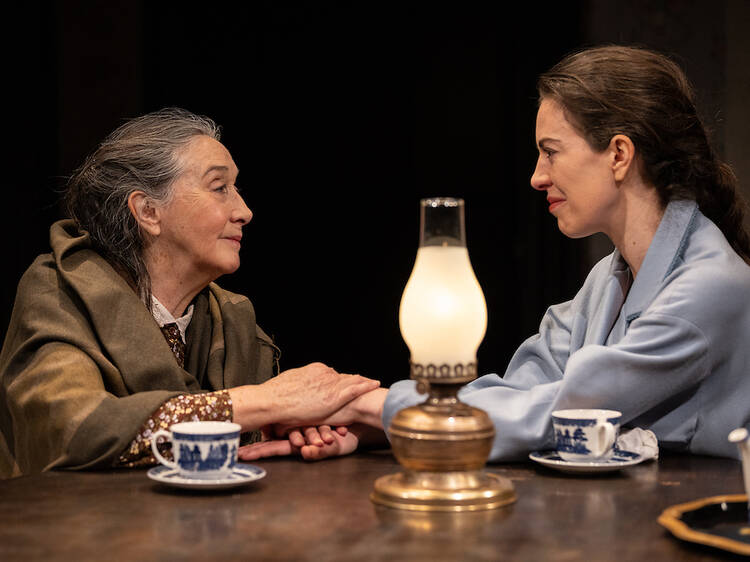 Theater review by Melissa Rose Bernardo  Give the Mint Theater Company an uncut gem—an obscure work by the likes of Ernest Hemingway, A.A. Milne, or, in this case, D.H. Lawrence—and they’ll buff it into something precious: a multifaceted theatrical heirloom to be treasured for years to come. Now, for the second time in its three-decade history, the Mint is mounting Lawrence’s The Daughter-in-Law, a dense, class-conscious drama that is by all accounts the best of the novelist’s eight rarely produced plays.  The East Midlands dialect is thick, and even those with an ear for accents might have difficulty understanding all the dialogue—though the actors, especially the women, handle it well. As soon as you’re seated at New York City Center’s intimate Stage II, scan the program notes to pick up a few handy terms: a “blackleg” is a strikebreaker; “day men” are the miners who work in teams; “orts and slarts” are leftovers; “clat-fart” is gossip. (Drop that one at your next cocktail party!)  The plot is set against the backdrop of England’s Coal Strike of 1912. Mrs. Gascoyne (Sandra Shipley, impressive in a rather unsympathetic role) has two miner sons whom she “mards” (i.e., spoils): the pouty Joe (Ciaran Bowling) and the glowering Luther (an over-the-top Tom Coiner). Much to her dismay, Luther has recently married Minnie (a wonderful Amy Blackman), a former governess with supposedly questionable taste in furnishings—and a nest egg that exceeds her husband’s annual salary. Before we 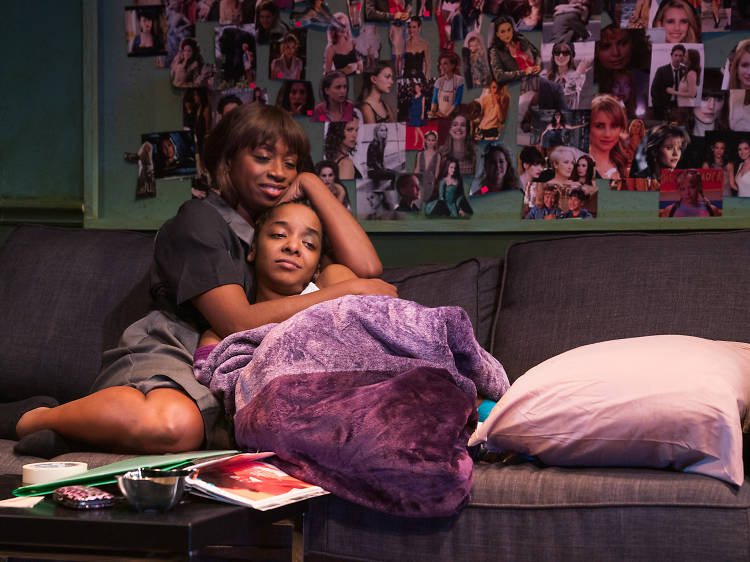 All the Natalie Portmans

Theater review by Melissa Rose Bernardo  All the Natalie Portmans has a good gimmick at its core. Whenever the play’s heroine, 16-year-old Keyonna (Kara Young), is lonely or distressed, her imaginary best friend, Natalie Portman (Elise Kibler)—actress, activist, Harvard alum—magically appears in costumes from her most famous films: the feathered tutu from Black Swan, the intergalactic warrior gear from the Star Wars prequels. “She the best in the game right now,” Keyonna tells her older brother (Joshua Boone) as she tapes Cosmopolitan pics of Portman to her dream board alongside photos of Julia Roberts and some token shots of Gwyneth Paltrow. “Hollywood is full of beautiful, talented women, Sam. And I see that. I honor it. And someday I’mma make mad money exploiting the hell out of it. Natalie is my ticket.” The rest of C.A. Johnson’s play, unfortunately, is awash in Hollywood-style clichés. Keyonna is smart as hell but skips AP calculus “ ’cause it’s easy.” (Between this play, Halfway Bitches Go Straight to Heaven and The New Englanders, Young is quickly cornering the market on brash, brainy teenagers.) Sam is trying to be both brother and father to her since their dad died; their alcoholic mom (an excellent Montego Glover) disappears for days at a time, leaving her kids to scrounge for food and rent money. And when she is there, she’s by turns disinterested and demeaning, referring to the lesbian Keyonna as her “ass-backwards daughter.” Johnson puts a twist on the love-tria 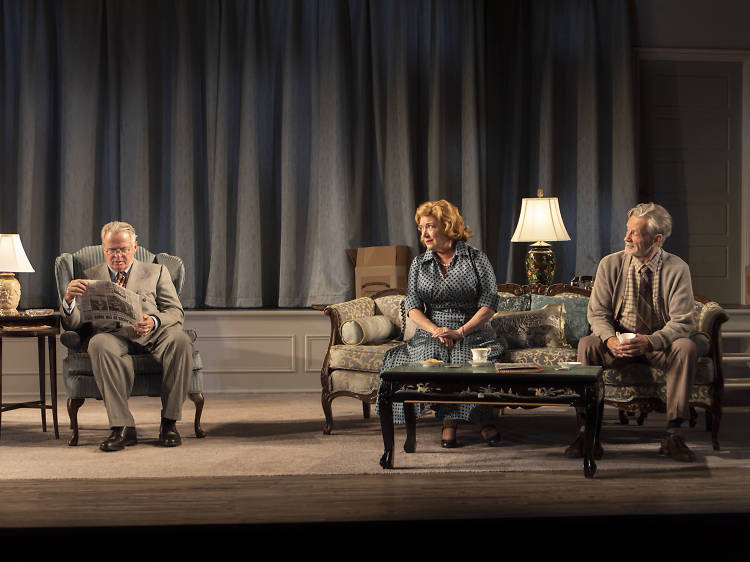 The Young Man from Atlanta

Theater review by Melissa Rose Bernardo Even the most fervent Horton Foote fan might be hard-pressed to explain the appeal, much less the Pulitzer Prize, of The Young Man From Atlanta. The playwright was renowned for his delicate, layered storytelling, but this 1995 drama lays it on thick. Within the first few minutes, proud Houstonian Will Kidder (Aidan Quinn) mentions his “slight heart condition.” Soon he blurts out the entire tragic tale of his 37-year-old son Bill’s recent death, the newfound religious fanaticism consuming his wife, Lily Dale (Kristine Nielsen, kooky but relatively reserved), and the suspicious appearance of Bill’s, ahem, roommate, the much-discussed but never-seen title character. And then Will, who has just plunked down $200,000 (in 1950!) for a new house, gets canned from his grocery-wholesaling gig: “We need younger men in charge here,” says the tactless Ted Cleveland Jr. (Foote veteran Devon Abner). That’s a lot for even someone with a good heart to take in a single scene. The steely-eyed Aidan Quinn, back on stage after seven seasons on CBS’s Elementary, proves an ideal red-blooded Texas businessman, and the perfect anchor in an often shaky piece. (As Lily Dale’s stepfather, the family peacemaker, Stephen Payne looks uncomfortable in even his best moments.) And go-to Foote director Michael Wilson, who helmed 2007’s superb Dividing the Estate and 2009’s nine-play masterwork the Orphans’ Home Cycle, at least gives this head-scratcher of a play a hands