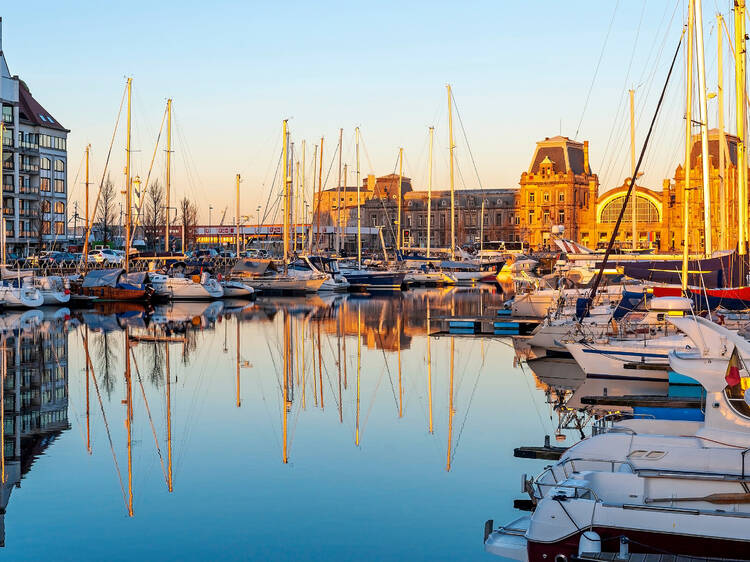 Let’s face it, the Belgian coast’s only city is probably not somewhere you’ve dreamed of visiting. But like, say, equally underrated Antwerp (although much, much smaller), Ostend is a very real, authentic port, with a fascinatingly chequered history. Take the seafront: bombed to bits in World War II, it’s now a mishmash of juxtaposing styles. Don’t miss the gabled Belle Époque-era townhouses (best example: Villa Maritza), the curved-glass 1950s Casino and King Leopold II’s former villa, with its ’gram-worthy marble-tiled porticoed arcade. Oh, and if you reckon the beach will be rubbish, think again: the widest of promenades is fringed by a line of seasonal bars – all palm trees and Ibizan loungers – curling around an epic sandy bay. How to commute all of this? Do as the Belgians do and take your pick from electric bikes and quirky tandems to pedal-driven go-carts for two. 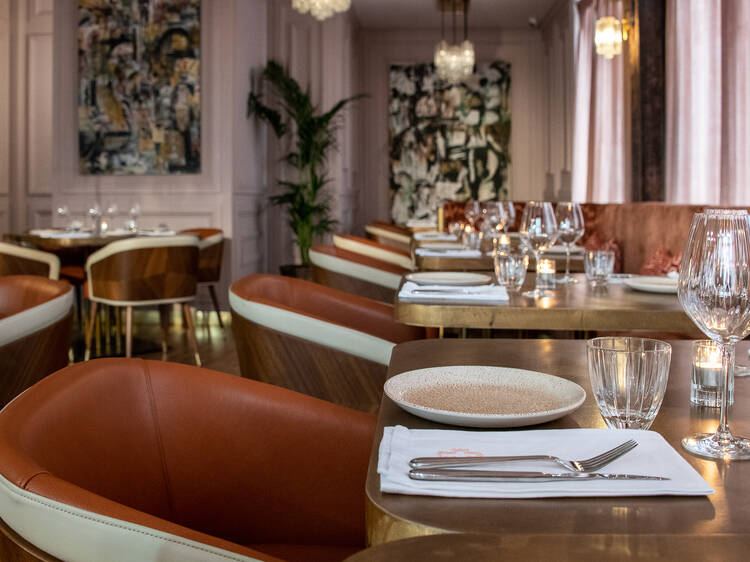 First things first: The Cross is a venue, rather than a straightforward restaurant. Its concept is, however, a little involved if you weren’t around ‘back in the day’. A reincarnation of the legendary 90s club of the same name, it’s rebooting in what was the long running King’s Cross pub The Driver. Confused? The explanation is simple enough: the same owners, Billy and Gemma Reilly, were behind both, so essentially they’ve revamped one with the name of another from their back catalogue. Anyway: let’s come to this venture fresh. It has a whopping six floors, including a minimal basement club (we liked the look of that), cocktail lounge, ground-floor bar and roof terrace with exquisite urban views. In a slightly strange move, it’s 25s only after 8pm, so keep this in mind if you want to have dinner with anyone who doesn’t remember the original series of Big Brother. Salvaged items and memorabilia from the original Cross nightclub set the tone across the floors, from a vintage cigarette vending machine to a fairground Waltzer car seat – and even a Buddha in the entrance. Sitting sedately amidst the nostalgia is the first-floor dining room. An exercise in high-end plush, it's all polished marble, brass-top tables and bare brick, as well as super comfy banquettes, velour curtains and mid-century glass chandeliers. House music pumps away, unobtrusively referencing yesteryear – except that now, of course, the crowd is here for small plates rather than – ahem – small pills.  Salvaged 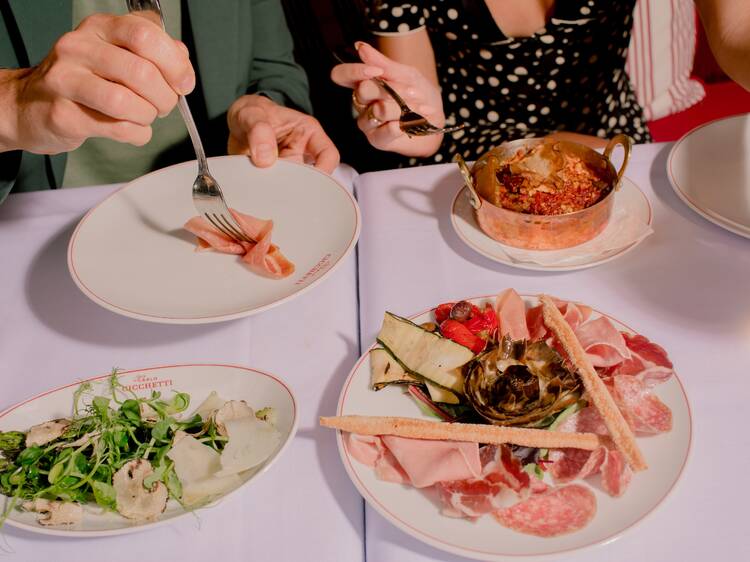 As my friend and I sat by the window in Cicchetti, watching the shiny Bentleys and Mercs glide along the street past Harrods, our inevitable question was: who can actually afford to live round here? Naturally it’s a little hard to fathom for most of us, relegated to the capital’s grittier neighbourhoods. Swanky Knightsbridge always offers the thrill of a foreign city, even if you’re a lifelong Londoner: taking our seats in Cicchetti’s Venetian-inspired dining room felt so luxurious it made us wonder why we so often settle for bare brick, a chalkboard menu and a dangling bulb or two. Why, here you can ogle a polished marble bar, towering lilies in vases, lemons piled high in bowls, and burnished brass by the bucketload. There’s even a colourful mural across the whole of one wall. And look up: that’s your beaming reflection in the mirrored ceiling. The glitzy room proved an appropriate backdrop to nibble what turned out to be mostly textbook cicchetti, those small-to-medium sharing plates served in Venetian bácari, explained the waiter, who suggested four to five dishes between two. Owned by global Italian chain San Carlo, this is a confident restaurant that undeniably knows its game: fillet steak tagliata arrived sliced ruddy and butter-soft, shy under shards of salty parmesan and fronds of rocket. In fact, our old mate rocket found its wily way everywhere: beneath a mound of ruby tuna tartare – almost pâté-like, such was its melt-in-the-mouth consistency – and accompanying d 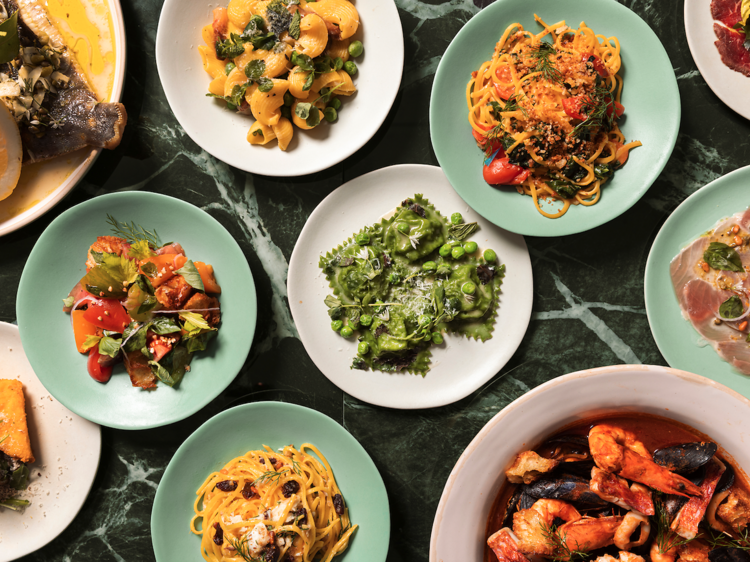 The other day a takeaway opened near where I live with a slightly pretentious name – no surprise there. But the real shocker is it’s selling penne – penne! – with a chicken and tomato sauce at £12.50 a pop. Which puts into perspective just what good value a pioneer like Lina Stores is. Here, at its chic new Marylebone Village restaurant, exemplary pasta dishes are served beautifully, and hover within the reasonable £7-14 price bracket. Take, for example, a plate of pillowy grass-green ravioli filled with pea and ricotta, drizzled with a richly savoury primavera sauce, and topped with mint, herby peas and shavings of pecorino romano. The price? A snip at £7. And it wasn’t even tiny.  More filling still was the tightly packed bowl of £11 crab linguine, its sheer fishy simplicity requiring nothing other than a crack of black pepper. And let’s not even get started on our meal’s carby highlight (tip: if you’re a couple you need only share two pasta dishes, but we were unrepentantly greedy). A majestic tagliolini – made with three times as many egg yolks as normal – was simply adorned with parmigiano reggiano, butter (lots of it!) and delicate shards of black truffle. And yet even this silken, unctuous miracle still only came in at £12 – yep, 50p less than my local takeaway and it’s got truffles in it. Plus, we’re eating in the heart of W1, for heaven’s sake. The original Lina Stores is one of Soho’s oldest delis, sitting pretty on Brewer Street since 1944 selling Italian ingredien 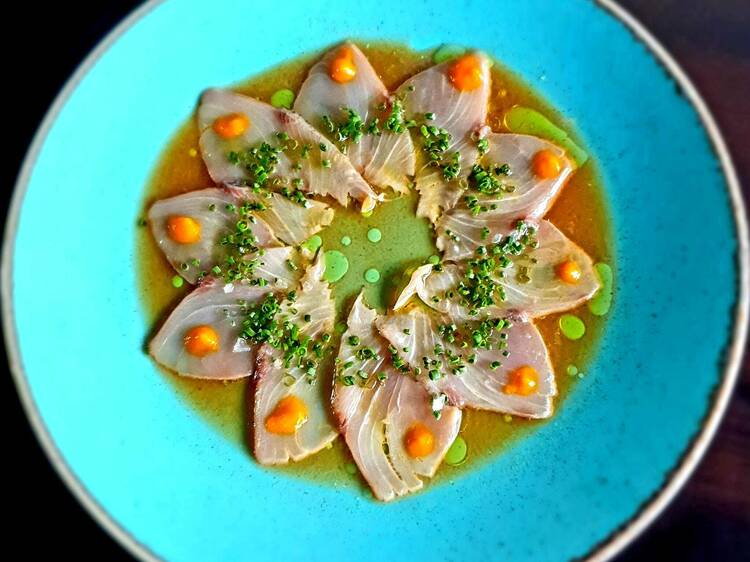 London is about juxtaposition, right? We all know the gentrified street by the 1970s estate, or the traffic-choked thoroughfare home to an unexpected small plates joint. Leyton (disclaimer: I live here) is a case in point; its treasures are often tucked away or scattered. Once-forlorn Overground station Leyton Midland Road now boasts a handful of said gems, from local coffee legends Perky Blenders to craft beer bar Gravity Well. Bamboo Mat, a new Peruvian-Japanese arrival, is directly opposite. Occupying the site of a short-lived fish restaurant, the former’s aquamarine interior, with its tiled floor and seafood wall stencils, has been updated with mahogany tables and window-counter seating. But when my friend and I arrived on a Wednesday night the place was, as we feared, empty. It’s a unique opening for this part of east London. Bamboo Mat’s Nikkei menu – the cuisine that fuses Japanese recipes with Peruvian ingredients – has been created by chefs Denis Gobjila and Victor Rosca, who met working at Soho’s acclaimed Nikkei restaurant Chotto Matte. There’s ceviche, tiradito (sashimi in a citrus sauce) and maki rolls (all at £10-£15 a plate), with mains including lamb chops, salmon teriyaki and grilled wagyu. As we took our seats under the fronds of an oversized houseplant, house music gently throbbing in the background, we were served by a Moldovan waiter whose enthusiasm and self-confessed inexperience somehow merged into winning charisma. He explained how fascinated he was w 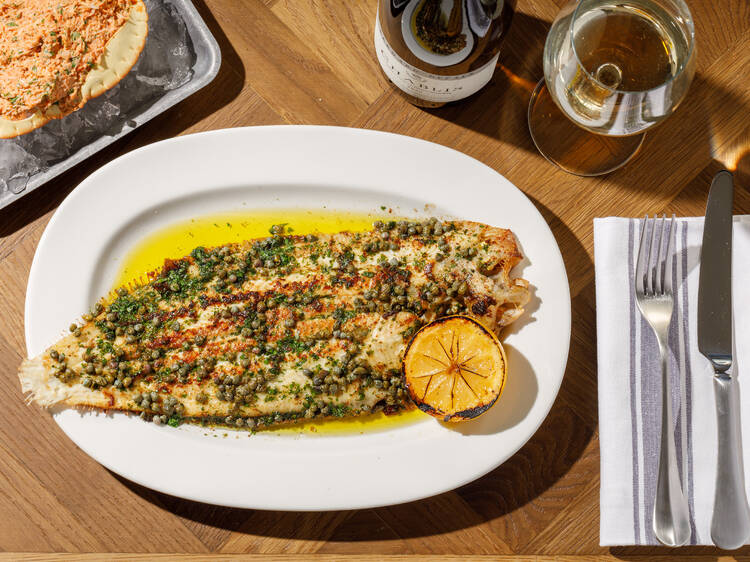 Sorry, Revolve, but my evening didn’t start so well. Firstly the rain, as I weaved through the glistening Shoreditch streets, was biblical. And I’d forgotten my brolly. Then there was the hellhole of Broadgate Circle itself, with inexplicably limited access – closed footpaths and ear-shattering construction everywhere. And thirdly, at neighbouring corporate pub The Botanist, arriving drenched to meet my friend, I was barked at by the door attendant to remove my (Folk!) cap. Even to this lifelong Londoner, the City and its weird customs remain unfathomably alien. Thankfully, things improved when we ascended to the upper level of the circle and through the doors of Revolve. This new brasserie is inspired by the grand dining institutions of Paris and New York but also invites top guest chefs to take over the kitchen. The reality is less haughty, more homely: despite the chaotic location, the dining room feels tranquil – more laidback neighbourhood hangout than City staple. And as the rain eased, the evening sun streamed in over the restaurant’s parquet flooring, illuminating the handful of couples having tête-à-tête dinner. Things were rowdier beyond the glazed panel in the bar area with the post-work brigade, while the terrace, populated by a brave soul or two puffing away, would surely be buzzing on a warmer night.  The must-order? A fabulous shellfish cocktail – all shredded lettuce and vivid green whorls of avocado Head chef Arran Smith has done time at Scott’s of Mayfair, 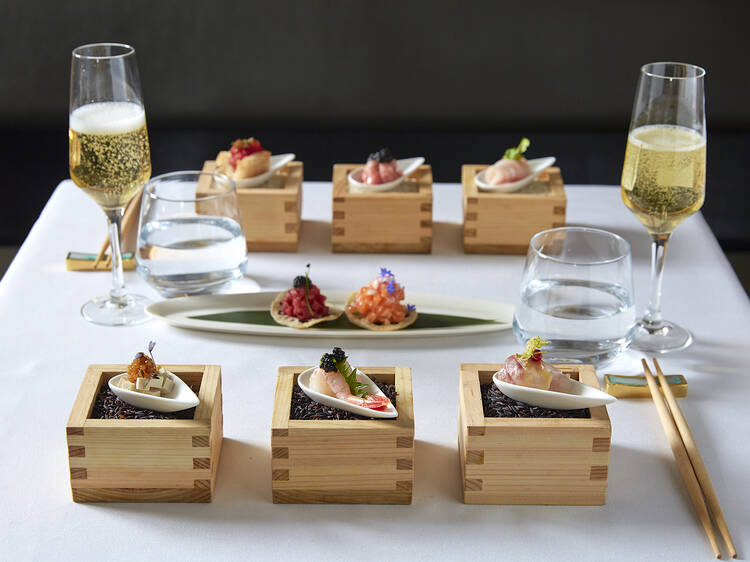 ‘I’ll leave it up to you.’ Isn’t that a lovely, life-affirming phrase? It’s also a whole way of dining in Japan, summed up economically in one word: ‘omakase’. It simply means that you entrust your meal to the chef, as they know what’s fresh and tasty better than anyone, right? Before we get too excited, a warning. As a concept, omakase is spenny; and at minimal new Fitzrovia opening Rai, we’re talking special-occasion spenny. Here, dinner is art, with each plate – nope, we’re not even talking food yet – made from eye-catching recycled materials and worthy of a ’gram post on its own. As is the interior: arriving at opening time, my friend and I bagged two coveted spots at the stylish, rose-adorned counter so we could watch the chefs calmly at work. The omakase element defines the sashimi and sushi: whether you order à la carte or a tasting menu (from £70 to £150 per person) you’ll be served whatever raw fish is in that day (if it’s anything like our visit, salmon and tuna will feature heavily). For additional wow factor, everything was presented on an outsize driftwood sculpture – cameras out Throughout, knowledgeable server Chris was on hand with the kind of detail that makes a meal an education. Take the soy sauce – I mean, have you given the stuff any thought before? ‘It’s aged for five years to maximise the umami flavours,’ he said, pouring it into petite bowls. He then produced a fat finger of vegetable that looked like a celeriac’s skinny-bitch green rellie. ‘Ever se