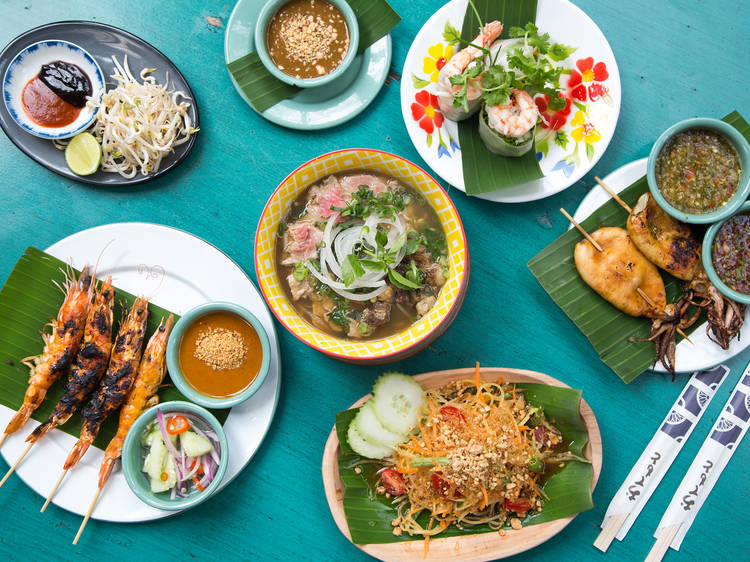 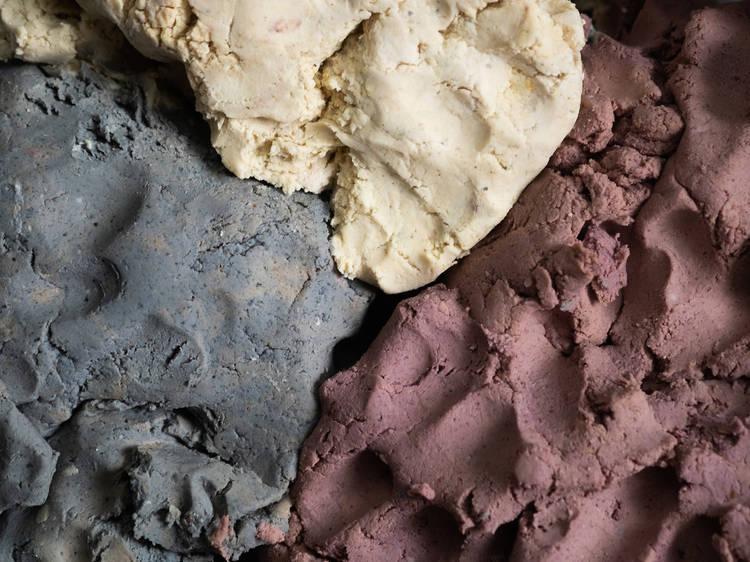 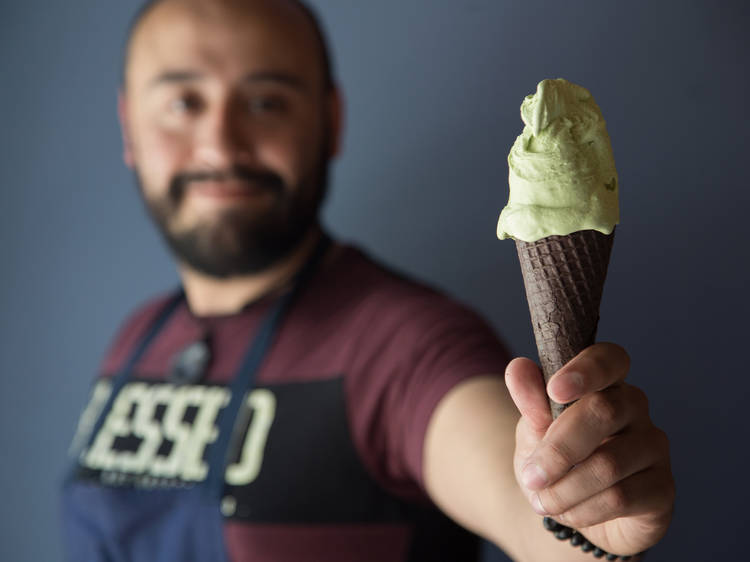 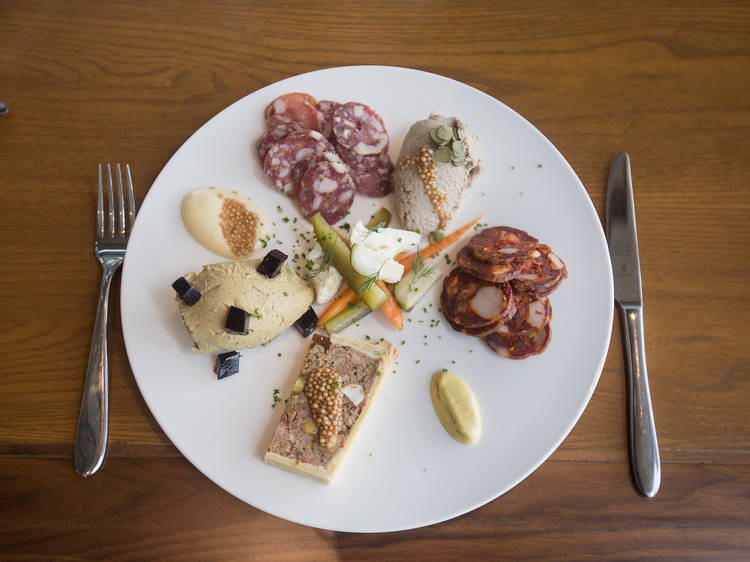 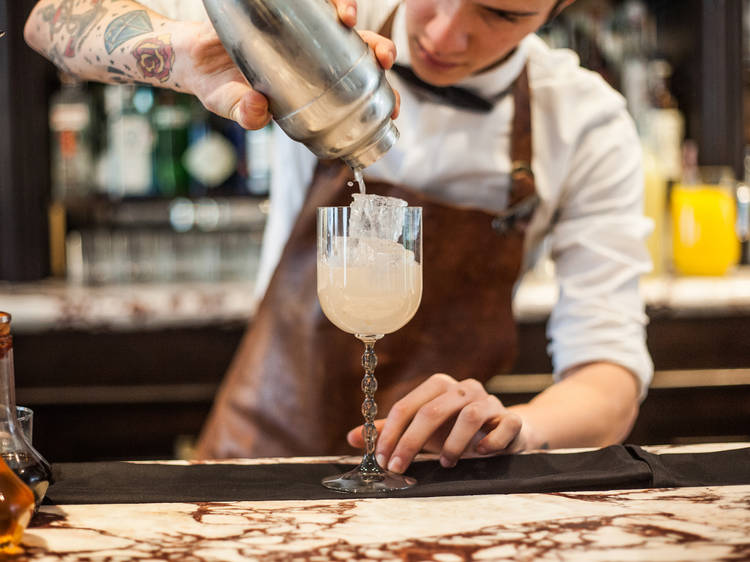 Both the logo and the name of this bar refer to a jigger, the tool most used by bartenders to measure liquid ingredients for cocktails. You’ll have to cross the well-kept garden past the torch-lit fountain to enter.  Once you’re inside, the velvet decorations, deep bronze and dark wood tones will make you feel sophisticated and pampered. There’s an impressive marble bar where the star of the show, Mica Rousseau of Nikki beach Los Cabos and Buddha Bar Mexico, enchants visitors with cocktails. I started with the Inside Manhattan from the Classics menu, made with bourbon, vermouth and Angostura bitters. It’s a classic combination of strong flavors with a new look thanks to the old-fashioned glass it’s served in and the hollow ice ball the bartender cracks open right before serving it. There’s also a take on the Ramos Gin Fizz that hit the spot. An aromatic mixture of gin, lemon, egg while, whipped cream, and orange blossom water modernized with vanilla ice cream and violet syrup. It’s definitely a New Orleans style retro drink, and if not prepared correctly can be heavy. His version of the gin fizz bouquets I also liked, it is an aromatic mixture of gin, lemon, egg white, whipped cream and orange blossom water, updated with vanilla ice cream and a touch of violet syrup. It's a retro drink, very New Orleans style that, if not prepared correctly, can be heavy and saccharine. However, this was not the case at Fifty Mils.  Should you want to nibble on something, the menu is far more 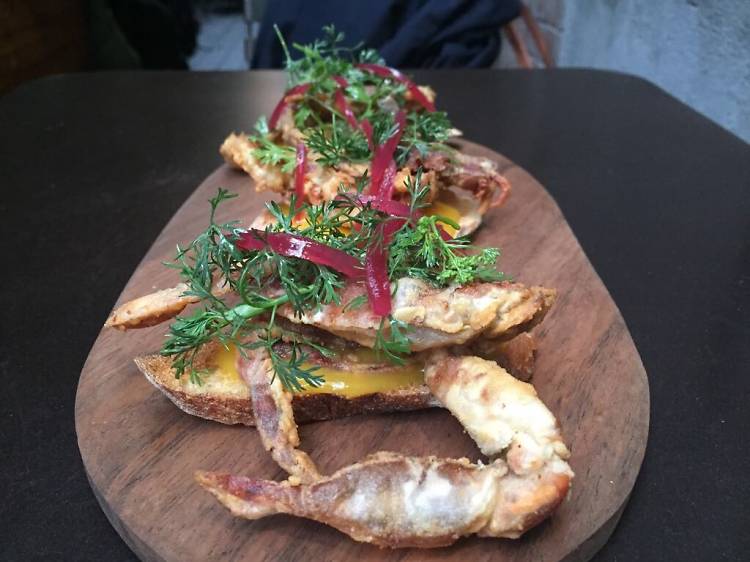 Panadería Rosetta in the Juárez neighborhood was successful from the moment that it opened, but Elena Reygadas didn’t rest there - instead she seized the opportunity to use the neighboring space and turn it into a more casual space than Rosetta y Lardo, with a pleasant bar, outdoor seating and a menu that shares some elements with Rosetta and Lardo, but also diverts significantly. The emphasis lies in the breads, pastas and the dishes with strong herbal accents that were masterfully concocted by Italian chef Giorgio Locatelli; it’s also less formal and more playful, flirting with the aesthetic of a tapas bar, with a menu in which the most nutritious elements appear as appetizers. From a comforting leek, potato and bacon soup, to vegetarian options (like the endive, grapefruit and mint salad, the lima bean hummus tendered by tarragon, or the grilled veggies with nettle mayonnaise), to instant classics like toasted bread with soft buttered crab, spicy mango salsa, pickled purple onion and cilantro shoots: one of the most playful and on-point combination of flavors, textures and colors that I’ve tried all year. The soft, crumbly bread, with honeycombed, crunchy crust; the mango, sweet and aromatic, with its touch of spice, all contrasts so well with the saltiness of the sea and the perfectly fried crab, complemented by the plus the acidity of the pickled onions – a recipe for salivation, and each element served in its perfect proportion. Now on to the main entrees, of which I sa 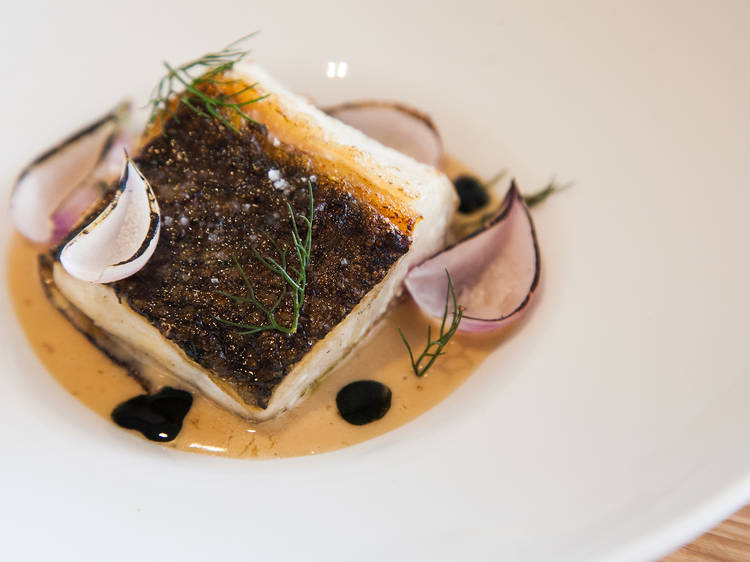 Finally! This Vicente Torres – of Oli, Mercado Roma fame – Mediterranean masterpiece is open. Named after the legendary Roman fish sauce, it’s nothing short of an absolute must-visit but, don’t take our word for it. This spot fuses glam and attention to detail in every single dish and delivers on their promise to make your dinner unforgettable. The foie gras was brought over from OCA, the Valencian chef’s first restaurant, with its sweet wine and edible flowers. The rest of the menu is totally new and balances local products and Mediterranean flavor and while some of the dishes are steady staples, others are borderline audacious. The culinary evolution from the OCA days is evident. A couple of examples, both with cantina-esque flair, are the beef tartar with egg yolk foam and mustard ice cream – which runs the risk of being overly sweet because of the caramelized onions but, it’s balanced by the cold spicy mustard – and the drunken chocolate clam with sangrita snow cone and sea salt – basically, a michelada turned cold appetizer. The next course has the delectable mushrooms with pickled beef, egg yolk, and potatoes; a monochromatic brown and beige slap in the mouth of deep and fleshy flavors tempered by the yolk and roasted potato. We also loved the fire-grilled totoaba served with roasted onions and Japanese Pil Pil. This one is farmed fish perfection, tender flesh and crispy skin, perfectly paired with the scorched onion. Four courses and dessert (apple crumble, anyone?) is 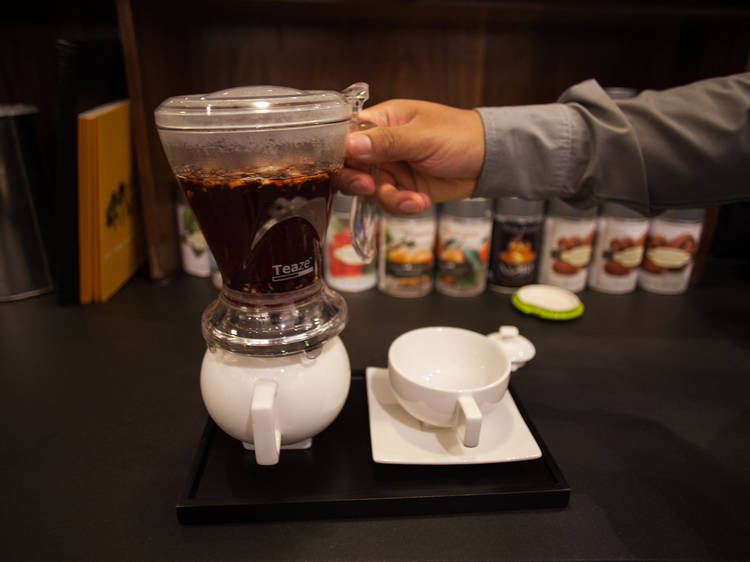 Tea lovers, rejoice! Tea Forte, a spot dedicated to the near-worship of tea, has celebrated its first decade in Mexico with a brand-new tea lounge - which also happens to be the only one of its kind in the world. The lounge ups the ante by adding tea-based hot and cold drinks, with or without alcohol, sandwiches and desserts to the already popular teas and tea accessories that are always available. The new boutique-lounge is located at the Palacio de Hierro Polanco mezzanine and has a bar, Acapulco chairs, and armchairs where you can sprawl out and enjoy the infusions served in their characteristic prism-shaped infusers, with the tea leaf stamp at the top, designed by founder Peter Hewitt.  We’re partial to the Africano, a cocktail made with African Solstice Tea (a warm theine-free rooibos with hints of fruit and vanilla), gin and vermouth. A perfect pairing with the fromager d'affinois cheese toasty, it’s like a creamier brie, and nuts. For dessert, we prefer the Golden Monkey, a fine black tea with Kouign Amman – a puff pastry that’s just as buttery as it is sweet. But, don’t worry, with over 40 different options, you’ll always have something new to try. 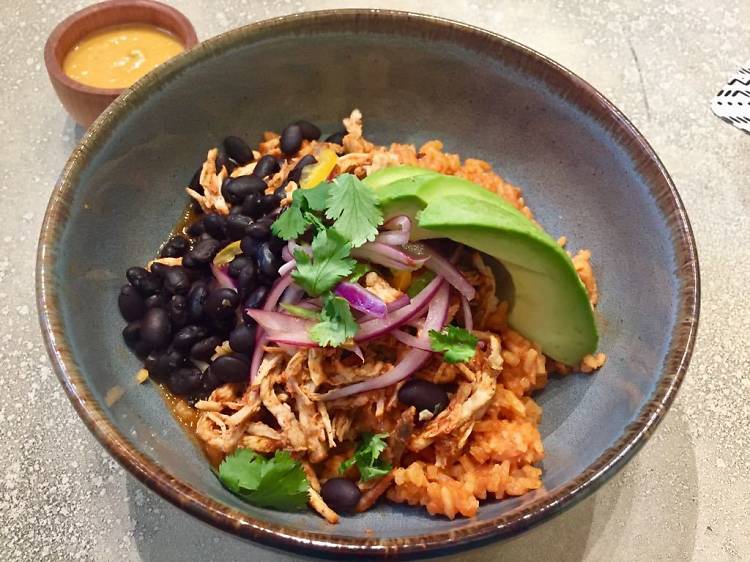 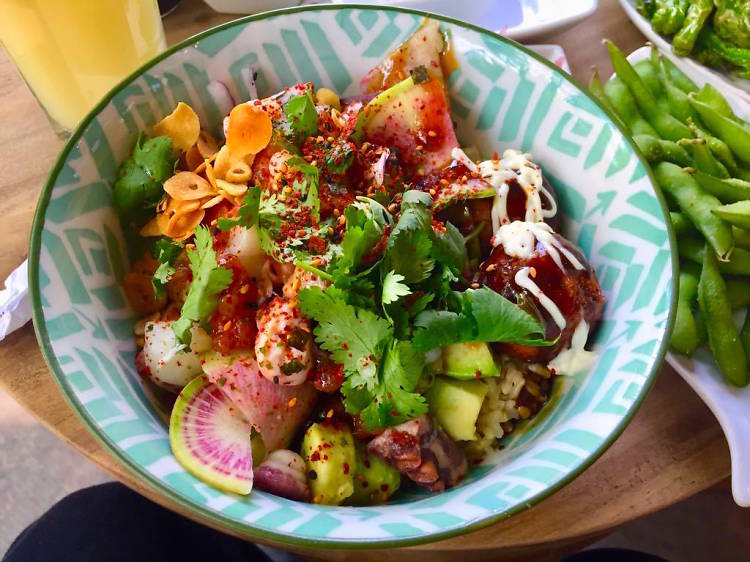 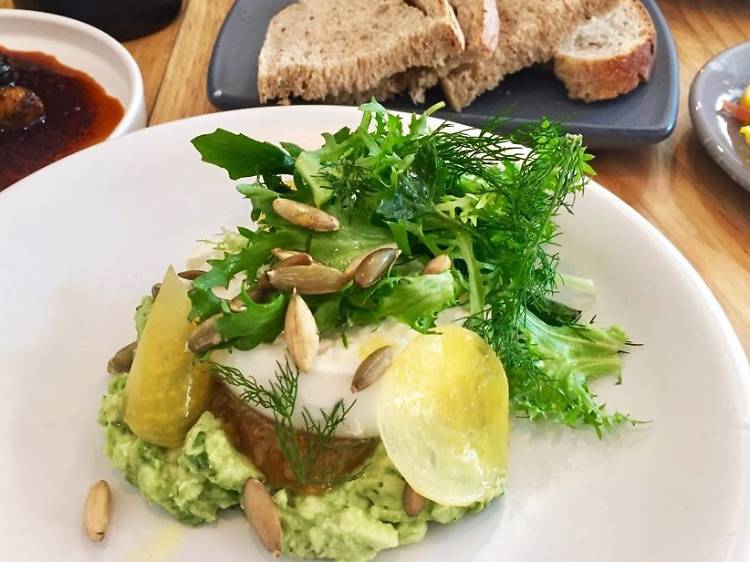 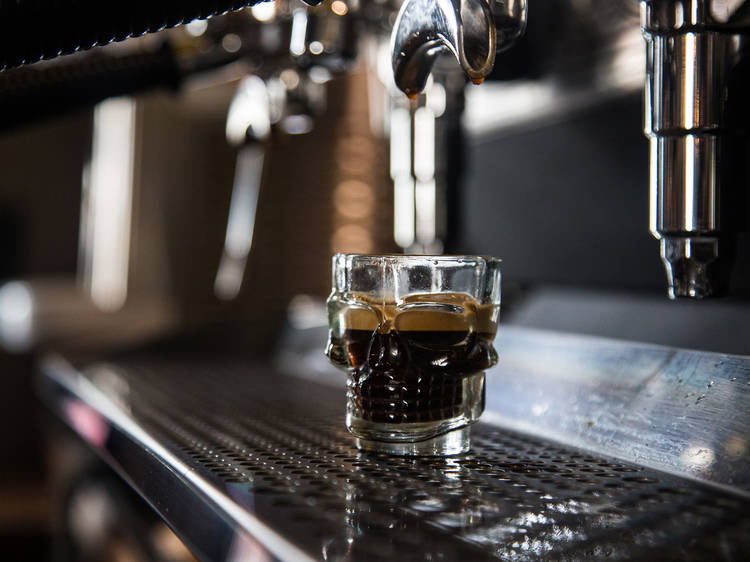