Romola Garai on window-smashing, passion and starring in ‘Suffragette’

Do you have a motto you try to live by?
‘I try to live by: “No fear. No Shame.” But if I’ve got through a day without “desperate to please” being my motto, I’m happy.’

What lesson did you learn from your mum and your grandmother?
‘Both my mum and my grandmother had passions outside of their work and families. My mum has always made time for reading and going to the theatre. So I was brought up in a house where it didn’t seem unusual for a woman to have interests outside of the family. I write – that’s just for me, and I feel guilty about it sometimes, but then I remember it’s important to do things purely for yourself. I’d like to write and direct a feature film, but it may never happen; I may be saying this for the rest of my life! And I read a lot of novels in the bath.’

Which women would you invite to your dream dinner party?
‘There are so many, it would be a banquet of thousands. But I’d love to have a dinner where I could sit down and talk to actresses directing movies now. I’d invite Brit Marling and Lake Bell, and maybe Angelina could come for coffee… she’d be too busy! I just think those women are so inspiring and they don’t know how inspiring they are.’

‘I'm so angry about austerity. It's bollocks’

How would you like to be remembered?
‘As a passionate person.’

Whose windows would you most like to smash?
‘George Osborne’s. I’m so angry about austerity. I don’t buy it that there’s not enough money. It’s bollocks. There’s loads of money in the City, there’s so much fucking money. I don’t believe we can’t afford the NHS.’

Are you a feminist?
‘I think you know the answer to that question. Yes!’

What single thing would you change about the film industry to make it less sexist?
‘We need more women directors. I think there should be quotas in film schools, or at least funds set aside. What I worry about is that too many women are attracted to acting or producing. The only way you can force through change is when people aren’t choosing between five men and one woman.’

What’s the most annoying question women get asked in interviews that men don’t get asked?
‘“How do you juggle it all?” It’s really annoying, not because it’s irrelevant but because men don’t get asked it. I’d love to read an interview with a big, male Hollywood star that goes: “It took you seven months to film this movie. Where were your children? Were they in LA? Who was looking after them? So, you were away from them for seven months – that must’ve been hard.”’

Does it piss you off knowing you get paid less than male colleagues?
‘Yeah, it’s crazy. When you get to the level of Jennifer Lawrence being paid less than Bradley Cooper for “American Hustle”, that is crazy. The thing is, a lot of the studio executives are women and they don’t like it when women ask for more money.’

Does Hollywood need a suffragette movement?
‘Yeah, it does!’

What lesson could the suffragettes teach us today?
‘Freedom isn’t given, it is taken.’ 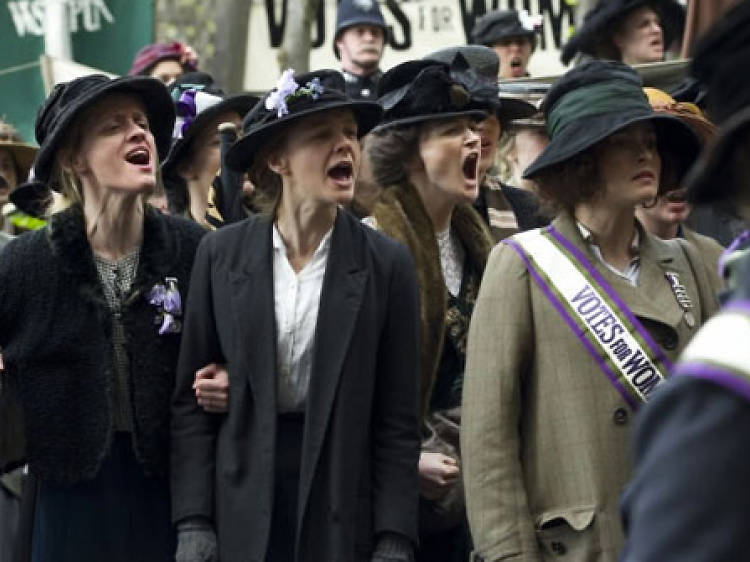