The biggest movies to see this summer

Prepare to welcome back the Incredibles, Spike Lee and those happy-go-lucky ‘Sicario’ folk in a blockbuster season featuring these eye-popping treats

Sicario 2: Soldado
There’s a new director calling the shots on this drug war sequel – Stefano Sollima (‘Suburra’) – but expect the same brooding menace and Benicio del Toro back as an anti-hero so cool he might have emerged from a Sergio Leone western.
From Jun 27

Incredibles 2
The original is one of Pixar’s finest, though it took it a while to get round to the sequel – 14 years. This time the Incredible clan’s nemesis is The Underminer (voiced by Pixar’s lucky mascot John Ratzenberger), who’s probably not going to be quite as low-key and passive-aggressive as he sounds. Frankly, we’d be sold if this film were just a two-hour family meeting.
From Jul 4

Hereditary
Acclaimed as a spiritual – okay, maybe ‘devilish’ is a better word – successor to ‘The Exorcist’, this stand- out horror movie is set to bring an icy chill to those long summer evenings. Toni Collette is on towering form and newcomer Milly Shapiro turns in a performance that will haunt your dreams. Prepare yourself.
From Jul 18

Ant-Man and the Wasp
The tiniest Marvel superhero missed ‘Avengers: Infinity War’ but he’s back for his second solo outing. We’ll catch up with Scott Lang (Paul Rudd), AKA Ant-Man, as a dad pining for another adventure. He’ll get more than he bargained for when Evangeline Lilly becomes fan-favourite the Wasp.
From Jul 18

Mamma Mia! Here We Go Again
Solving the problem of whether to go back to the start or pick up where the first Abba- fuelled ‘Mamma Mia!’ movie left off, ‘Here We Go Again’ does a bit of both, with Lily James playing the younger Meryl Streep (she’s back, too). Clever or merely indecisive? Time will tell. With those back-and-forward time-lines, think of it as ‘Interstellar’ in espadrilles.
From Jul 19

Mission: Impossible – Fallout
Six missions in and so far none has proved impossible, so is it time for a name change? ‘Mission: Tricky’, perhaps? As the latest title hints, there’s nukes in this one, with Sean Harris’s whispering baddie Solomon Lane resurfacing. Mainly, though, it’s another chance for Tom Cruise to give his insurers a coronary as he dangles and leaps from a variety of tall things. Vanessa Kirby joins the fun this time.
From Aug 1

Under the Silver Lake
Writer-director David Robert Mitchell ventures into ‘Big Lebowski’ territory by way of several Lynchian side alleys for this follow-up to his meta-horror ‘It Follows’. A hypnotic, spiralling neo-noir, it stars Andrew Garfield as the unkempt Sam, who prowls the streets like a Scooby-less Shaggy trying to solve the disappearance of his neighbour in a movie that looks set to join the ranks of filmdom’s lovably loopy LA stories.
From Aug 8

Deadliest catch: Jason Statham and Li Bingbing in The Meg

The Meg
Jason Statham meets a seriously massive dino-shark – the megalodon – and engages it in combat in the summer’s maddest-sounding action movie. The Stath is a stranded diver hunted by the uber-fish. Our prediction? It will end with the grizzled star punching the shark’s lights out, before high-fiving a passing porpoise and lighting a cigar. Underwater.
From Aug 9

BlacKkKlansman
Judging by reports from Cannes, Spike Lee is back to his incendiary best with this story of an African-American detective (John David Washington) infiltrating the KKK in 1970s Colorado. It’s a true story – yes, really – and promises to be a fierce, funny and topical takedown of white supremacists.
From Aug 22 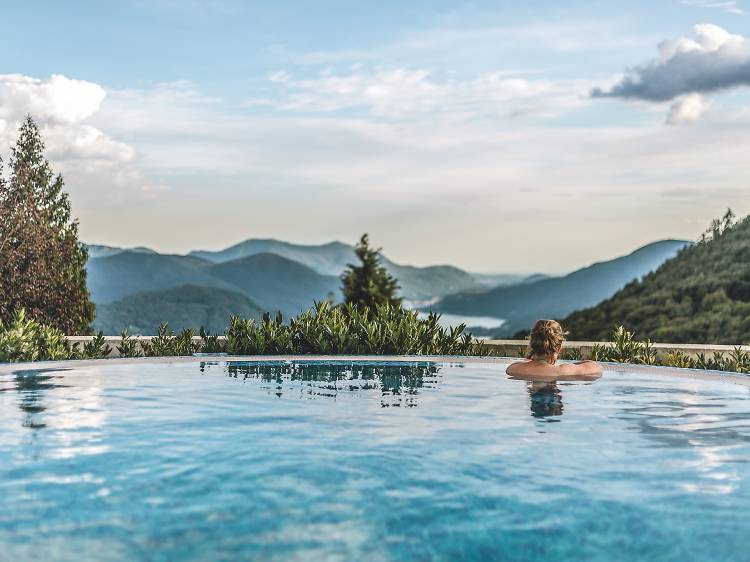 Find the perfect hotel for your Swiss summer staycation