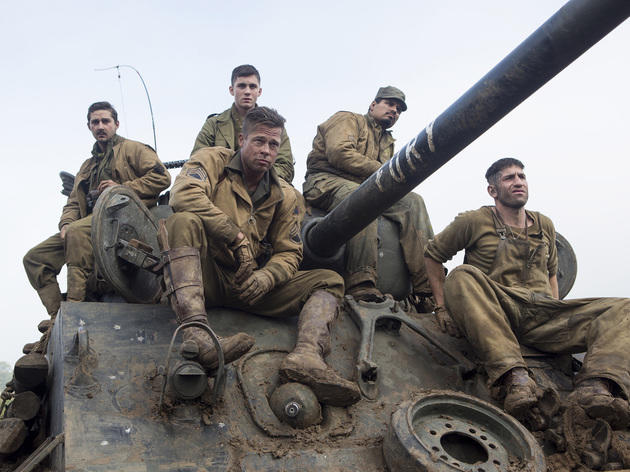 Brad Pitt pulls along this gutsy, old-fashioned World War II epic by the sheer brute force of his charisma. Germany, April 1945. The battles have all been won; the war is all but over. But Hitler refuses to surrender, so the Allies make a final push, taking Germany one town at a time. Pitt is tank commander Don ‘Wardaddy’ Collier, a growling war horse whose men hero-worship him like he’s the Second Coming. They’re not alone. The camera adores Pitt’s battered beauty. He is Adonis chiselled by a renaissance sculptor, left on a cliff edge to be pecked by gulls for a few hundred years. Like a Botticelli pin-up chewing on a wasp.

Fury strains to be a Great War Film but never quite gets there. After his assistant driver is killed in battle, Wardaddy is assigned wet-behind-the-ears new recruit Norman (Logan Lerman), a typist who’s never been inside a tank. His first job is to clean his predecessor’s blood and bits of face off the seat before Wardaddy takes him in hand like an overbearing father: "You’re no good to me if you can’t kill Krauts." Norman begs Wardaddy to kill him rather than make him shoot his first German. We haven’t seen Pitt this switched on in years. His Wardaddy is 110-percent testosterone. Parachute him into an anti-war march, and he’d have the lot of them signed up for active duty in 30 minutes flat.

The battle scenes thunder and rage with a satisfyingly unadorned realism. Everything is covered in mud and there’s plenty of authentically sweaty male bonding in the tank, the name of which gives the film its title. In places director David Ayer (End of Watch) goes for the hallucinatory horrors of the great Russian war film Come and See. Bodies pile up in heaps of limbs. Ordinary Germans, bombed out of their homes, tramp across the countryside like zombies, one woman still in her ripped wedding dress.

Sometimes Fury feels like an anti-war film. If Saving Private Ryan was about the goodness that survives during war, the message here is darker: war pulverises that benign spirit like bodies crushed under the caterpillar tracks of tanks. In a stomach-knottingly tense scene in a defeated German village, Wardaddy takes the kid Norman into a German flat where two young women cook them lunch. For Wardaddy, it’s a breath of fresh air, letting a little civilisation in – until the rest of the tank crew storm in, bitter and jealous. War has stolen their souls, and Wardaddy is betraying them by taking this meal and acting as if nothing has happened. War brutalises men, and that’s part of its lure. But then Fury remembers it’s a film starring Brad Pitt that requires heroism, and it grinds to a punch-pulling Hollywood ending.