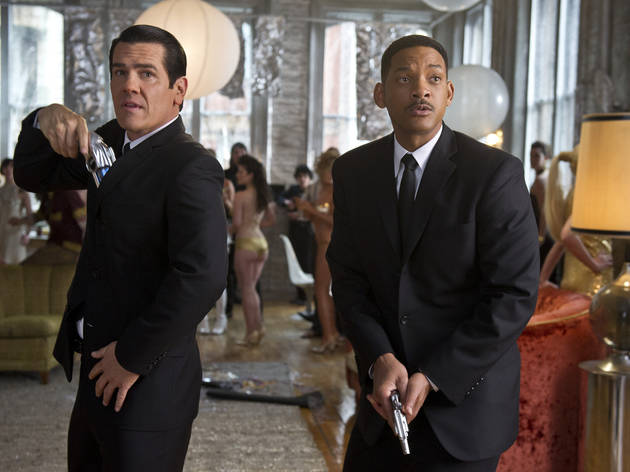 Remember the Men in Black? C’mon, sure you do. It was Barry Sonnenfeld’s late-'90s sci-fi comedy franchise that helped propel Will Smith to the heights of… um, wherever he is on the Hollywood pecking order now. Based on a comic book pitched somewhere between Dragnet and The Hitch-Hiker’s Guide to the Galaxy, the films teamed Smith’s Agent J with Tommy Lee Jones’s Agent K as smart-suited operatives for a secret NGO monitoring the activities of extra-terrestrials on planet Earth. The joke was that the aliens are rampant, we just don’t realise it because a) they’re often disguised as humans and b) thanks to a device called the neuralizer the agents are able to wipe our memories should we accidently glimpse a salivating monster levelling a chunk of Manhattan.

If the world was not crying out for a third instalment, it’s not because we’ve been neuralized, rather because MiB2 was 11 years ago and a dud. Perhaps realising they didn’t have any laurels to rest on, Sonnenfeld and a large team of writers have gone the extra light year to deliver a zippy, action-packed sequel that stands as the high point of the trilogy. When a dart-shooting, one-armed, Kiwi-voiced alien called Boris (Jemaine Clement) escapes from his lunar prison and takes revenge on Agent K by removing him from the time stream, J has to convince new boss O (Emma Thompson) to send him back to 1969 to save both K and Planet Earth from an invading armada of giant fleas. Cue a series of delirious gags positing what the agency would have been like in the ’60s (think fake-looking aliens like on Star Trek – priceless). Teaming up with the younger K (Josh Brolin delivering an authentically stony Tommy Lee Jones impersonation), J drops in on Andy Warhol’s Factory in a deliriously clever scene of retro-drubbing and future-guessing, and ultimately winds up at Cape Canaveral to gatecrash the Apollo 11 moon mission.

Men in Black 3 didn’t need to be this funny or flat-out entertaining in order to make its squillions. Sonnenfeld’s career has languished in television of late but he ringmasters all this kookiness like a smart young director with something to prove. With The Avengers, this, and Prometheus and The Dark Knight Rises still to come, the season is shaping up promisingly for tentpole sequels with brains to match their special effects brawn.