Here’s my theory: there are three kinds of New Year’s Eve.

Type One is the NYE where you go out and you go properly large. Incredibly, never-seen-you-that-drunk-before large. You start with a few drinks, at some point you march off to a house party. And then suddenly it’s 7am and you’re in someone else’s house, watching someone else’s cat crawling over the duvet that you’re somehow under. The hangover sucks. The regret stings. Not good: next year will have to be quieter.

Type Two is the NYE where you do actually decide to have a ‘chill one’. Maybe you go to spend it with your (relatively new) other half’s parents in the ’burbs. Maybe you end up in a nearby bar with some of the weirdly chatty locals, listening to terrible acoustic music by a man whose biggest claim to fame is that he’s a ‘touring musician’. Maybe, back home, early in the morning, you roll over, and… what’s all that wet stuff? Yep: your face is half-submerged in a puddle of your girlfriend’s sick. Really not good.

And then (because this is what adulthood’s like, apparently) there’s Type Three: the NYE where no one’s invited you to literally any parties or gatherings of any description. Absolutely nada. It’s a massive slight on the part of everyone you know.

So, clutching desperately at the only forthcoming charitable offer, you end up going to your housemate’s colleague’s irritatingly nice but quite faraway house, on the opposite side of town. Inevitably, the turnout is abysmal; welcome to the rejects’ zone. With no semblance of good vibes percolating in any corner of the room, you all gather around to watch some terrible NYE TV with a studio audience who are having only marginally more fun than you are. As midnight chimes and the couples around you gorge on each other’s faces, you discover that some dried-out pitta and very bitty guac is your only true source of comfort in that most arbitrarily revered of cultural moments. It feels… really, really not good.

Such is the bleakness of everyday life right now, you can’t even have the fun you don’t actually want to have

Okay, so this isn’t exactly a theory. What you’ve just read is my three actual most recent December 31s: not good, one and all.

And now look where we are. It’s 2020: a year that’s practically begging to be given whopping great yah-boo-sucks send-off… and yet all we see this New Year’s Eve is a vast, luxuriant expanse of nothingness stretching out before us. No big ones. No chill ones. No total non-events to thoughtlessly tag along to. Such is the bleakness of everyday life right now, you can’t even have the fun you don’t actually want to have.

Obviously, like basically everyone else in the world, I’m fed up with not being able to see my pals, meet strangers and hang out in any vaguely normal way with my family. But just this one time, I think I might revel in having my mind made up and being forced to stay home.

The shackles of overwhelming social pressure that bind this one particular date to the elusive notion of ‘having a good time’ have been loosened. In fact, they’ve been cut off and thrown away entirely – and for disillusioned NYE-sceptics like me, this really is a result.

No proper NYE means I don’t have to panic-attend events I don’t want to or dance awkwardly to music I don’t like. No more mindless small talk with randoms. Best of all, no real need to get wasted (as if there ever was). It’s going to be a massive relief.

They say this year has been a time of self-discovery and self-revelation – yadda yadda yadda – but they say it because it’s true.

All of us have gotten to know ourselves just a little bit better over the past nine months. Many have rediscovered old hobbies and spiritedly taken on new ones. Some exercised wildly, others became budding bakers overnight. I even started eating meat for the first time.

So, at the risk of alienating anyone who thought they knew me at the start of the year (and sounding like a massive bellend to pretty much everyone else), my 2020 NYE is going to start with a trip to the fishmonger’s and culminate in a very labour-intensive cacciucco – a traditional Tuscan fish stew packed with red snapper, monkfish, clams and langoustines. It’s rich and hearty and moreish and easily the best thing I ate this year; the same dish I rather generously chose to cook myself for my birthday back in September. Who knows, maybe I’ll throw in some bacon this time too.

Sure, you could argue the pandemic has aged me a good decade. (No argument: it definitely has.) But cooking up a fishy feast is almost certainly as close as I'm going to get to going properly LARGE on the cusp of 2021. And in a surprising twist, it’s likely to be my best New Year’s Eve in years.

Stay in and party with the best online NYE events 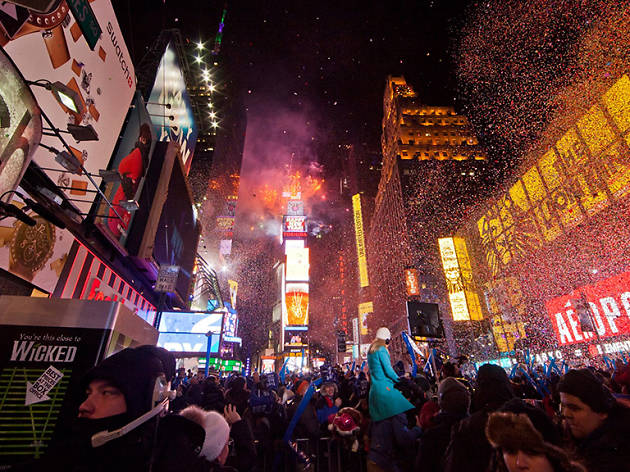 Club nights, house parties and huge public celebrations are all pretty much out of the question this New Year’s Eve, but you could go to an EDM festival, a charity rave, a huge virtual street party or a massive digital concert – all from the comfort of your home.