Countries all over the world are betting on the rollout of vaccines to provide a clear route out of this pandemic. But every government now faces a major question: does it reopen certain parts of its economy – travel, theatre, concerts, even work – to everyone? Or just to those who have had the jab?

Early studies show that at least two of the major vaccines are effective in preventing transmission of the virus, as well as reducing severe symptoms. That means that if businesses, workplaces and borders are to reopen, one way to curb the risk of a new outbreak would be to demand some sort of proof of vaccination on entry – a ‘health pass’ or ‘vaccine passport’.

The question is already fraught with moral, ethical and legal issues. In the majority of countries, the vaccine will not be compulsory, and the pace of the rollout means many of us will still have to wait months. Many might not be able to take it at all for medical reasons, while others may object because of beliefs that are incompatible with vaccination. And only allowing certain freedoms and privileges to those who have had the shot would probably be seen as discriminatory by many people.

So will you really need to present a form of vaccination certificate to get into bars, restaurants and theatres? Will you need to have had the shot before you next go on holiday? And what even constitutes proof of vaccination? Here’s everything we know about ‘vaccine passports’ so far.

Everything you need to know about vaccine passports

It’s still early in the global rollout, but people who’ve had the vaccine are already at an advantage when it comes to travel. Although many governments are still advising (or completely banning) their citizens from travelling overseas, an ever-increasing list of tourism-dependent destinations sees in the rollout an opportunity to reopen borders and lift other travel restrictions.

Poland, Estonia, Iceland, Romania, Georgia and Seychelles, among others, have already announced that they will allow proof of vaccination as an alternative to existing testing and quarantine requirements – meaning those who’ve been vaccinated can skip the harsher controls imposed on everyone else. Many more will likely follow suit. And while no country has yet made vaccination a condition of entry, this may well start to become standard once the vaccines begin to be rolled out more widely.

And it’s not just countries that will require some sort of proof: travel firms and airlines may well do so too. Saga, a cruise company that specialises in trips for the over-50s, says all travellers will now have to be fully vaccinated, while Australian airline Qantas has repeatedly said that passengers will need to show proof of vaccination before boarding flights.

Even if you’ve got no intention of travelling overseas any time soon, you might soon need proof of vaccination just to get the most out of life in your own country.

This is already the case in Israel, where nearly half of the population has received the jab. It has launched a ‘green badge’ system to reopen certain sectors to those who have had both doses of the vaccine. From February 21, badge holders have been able to access gyms, cultural events, places of worship and hotels. As the country eases lockdown, the idea is that this will soon be extended to other, higher-risk settings such as cinemas and theatres.

And even if countries don’t set up their own centralised systems, individual businesses may well introduce their own requirements on entry – especially if that means they are more likely to be able to reopen at full capacity. A whole host of private companies are currently working on apps that could be linked to a person’s medical records. These could then be shown at the entrance at any venue requiring proof of vaccination. You would turn up, open the app, and it would generate a QR code saying that person had been vaccinated – much like a digital ticket.

Industry figures say vaccine passports like this will be key to getting businesses up and running again. The Music Venue Trust, a charity that represents grassroots venues across the UK, believes requiring proof of either vaccination or a recent negative test is the only feasible way for concerts to take place again this year. ‘Economic viable events can’t happen with social distancing,’ Mark Davyd, the charity’s CEO, said on Friday. ‘Vaccine verification is one of a number of tools which venues can use to get back to full capacity.’

The type of venue you’re attending might make a difference too. In the UK, the government has ruled out introducing a vaccine passport system in venues like restaurants and pubs. However, prime minister Boris Johnson last week said that the only way for larger-scale events such as plays and concerts to take place in the foreseeable future would be for theatres and live music venues to demand proof of immunity on entry. Knowing that those around you have been vaccinated may also boost public confidence in going out, and in doing so, help the economy bounce back quicker.

Not travelling or even going out to live events? You might still need a vaccine passport, as some firms may soon require their employees to be vaccinated.

In the UK, one plumbing firm told the BBC it would require staff to get the jab and may not keep on those who don’t comply. The UK’s justice secretary, Robert Buckland, has said companies will be able to demand that all new staff are vaccinated, as long as this is written in their contracts.

For existing employees, however, it is unlikely firms will be able to make such demands. Vaccination requirements, if enforced, could lead to costly unfair dismissal and discrimination claims relating to disability, religious belief or because the employee is pregnant.

Employment lawyers say exceptions might only be for those for whom vaccination is ‘critical’, such as care home workers or people in jobs involving a lot of overseas travel.

Every government is weighing up the merits of vaccine passports, and some have even started handing them out. As well as Israel’s ‘green badge’, which allows vaccinated citizens to access certain services, a handful of other countries around the world have also started issuing certificates that could soon allow those who have had the jab to travel abroad.

In Iceland, citizens who had had two doses of the vaccine are now eligible for a certificate, while in Denmark, vaccinated travellers can now print one off the government’s website to show they have had their jabs. The country also plans to launch a smartphone app that can be shown at passport checks to prove vaccination status. Bahrain, meanwhile, has launched its own BeAware app that contains a QR code linked to its national vaccine register.

Of course, things get a bit trickier when it comes to international travel. Right now, there is no widely recognised vaccine ‘passport’ that you can flash whenever anyone asks you to prove you’ve been vaccinated. Each country either has its own requirements as to what constitutes proof of vaccination, or hasn’t made it clear what counts. So unless your country has officially launched its own vaccine passport, the best advice is to hold on to whatever documentation you receive when you get the jab, and hope that it does the trick.

However, a range of companies and institutions are now working on developing a global ‘vaccine passport’. The International Air Transport Association (IATA) has launched its own Travel Pass Initiative that would allow travellers to store vaccine and testing details on a digital app. There’s also the CommonPass, a similar idea from Swiss nonprofit The Commons Project and the World Economic Forum.

The challenge for any international ‘vaccine passport’ is to create a system that is easy to use and protects travellers’ data, but will also allow them to navigate a complex, ever-changing tangle of rules and restrictions across the world.

Because this is going to take a while to work out, it may well be the case that certain countries (or groups of countries) instead strike individual agreements with each other to allow mutual travel for vaccinated travellers.

For example, the Greek prime minister, Kyriakos Mitsotakis, has urged the European Commission to create a vaccination certification programme that would allow freedom of travel within the EU for those who have had the jab.

Yep, there are some seriously crunchy ethical problems to tackle here. The Israeli ‘green badge’ system has already proved controversial, because it discriminates between those who have and have not had a vaccine. Some argue that it creates a two-tier society, and that it overlooks the fact that some people might be advised not to get the jab for legitimate medical reasons, such as certain allergies, immune-system illnesses or pregnancy. That’s not to mention the fact that vaccination is not a legal requirement in Israel, and it’s up to the individual to choose whether they get immunised.

In the UK too, the government has said that there are ‘ethical issues’ about the role of government ‘banning’ people from going to the theatre or live music venues. Those issues will be addressed in an official report, due in the coming months.

The same debate is likely to play out in countries around the world throughout 2021. But despite that, even governments without a strong authoritarian streak may well see the introduction of local ‘passports’ as one way of boosting vaccine uptake in the long run – albeit one that comes at the expense of some personal freedoms.

There’s plenty of uncertainty around vaccine passports still, but one thing is clear: those who opt out of the vaccine risk being denied a whole lot of fun this year.

Find out more about the return of concerts 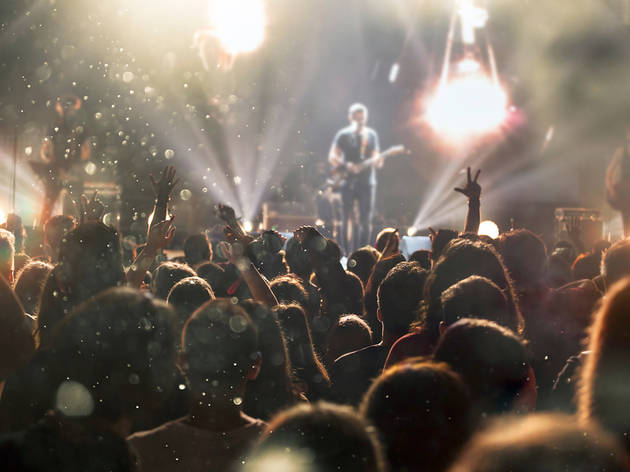 Concerts could finally return this year – but when? And what will they be like? We asked scientists, venues and industry insiders.