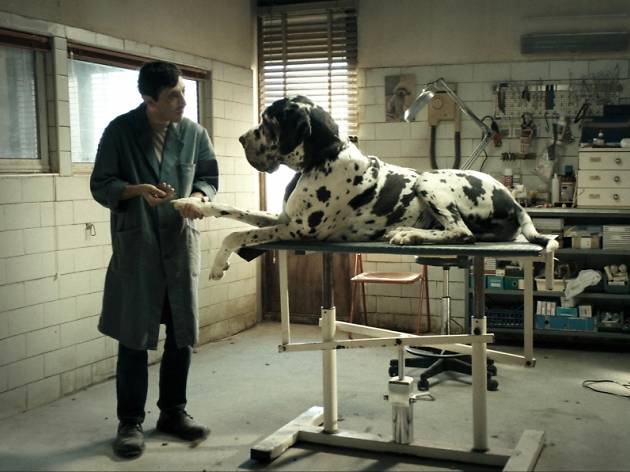 With 2008's Gomorrah, his seedy, hyperkinetic delve into Naples’s criminal underbelly, Matteo Garrone vividly mapped out a whole ecosystem of organized crime, populating it with sharply drawn characters and bursts of vicious violence. In Dogman, his latest odyssey through Italy’s hardscrabble fringes, the crime is of a more disorganized, spontaneous variety, but the gritty world-building is just as impressive—and this time the focus is tighter and more claustrophobic. Loosely based on a real incident, it’s an intimate tale of an essentially good man paying a heavy price for his weaknesses. It suggests that man and mutt aren’t really all that different when backed into a corner. The overall feel is of the kind of Aesop’s fable Scorsese would tell his kids.

Marcello Fonte is Marcello, the doleful, divorced owner of a dog-grooming shop on a poor Lazio estate that clings apologetically to the seaside. He does his job diligently, sensitively tending to the canines in his care, and he tries to be a good dad to his young daughter. The pair go scuba-diving off the coast together, and he daydreams of one day taking her to the Red Sea. But he’s in thrall to local bully Simone (Edoardo Pesce), a petty criminal who throws his substantial bulk around this tight-knit community at every opportunity, and seems unable to shake off his attentions. For reasons that remain hazy, Marcello supplies Simone with cocaine, a rash move that soon makes him an accessory to a violent crime.

This alpha-beta dynamic brings the film’s title into focus: Marcello is basically a poodle for this bruising, casually brutal mastiff of a man. Newcomer Fonte is terrific in the lead role, communicating Marcello’s meek protests with a twitchy physicality that grows slowly into a sketchy defiance. You can almost visualise Steve Buscemi in an Indiewood remake set in the boondocks of New Jersey.

The film’s scrubby, beat-up locale is its secret weapon. The rusting shopfronts, concrete estates and scrubland of this distant suburb of Rome crackle with the unmistakeable static of a Wild West town gearing up for a showdown. Cinematographer Nicolai Brüel lends this urban wilderness a sweeping widescreen feel that leaves the diminutive Marcello looking dwarfed and alone. But slowly, as he finds something approaching grim resolve, Garrone reminds us of that old Mark Twain adage: It’s not the size of the dog in the fight, but the size of the fight in the dog.