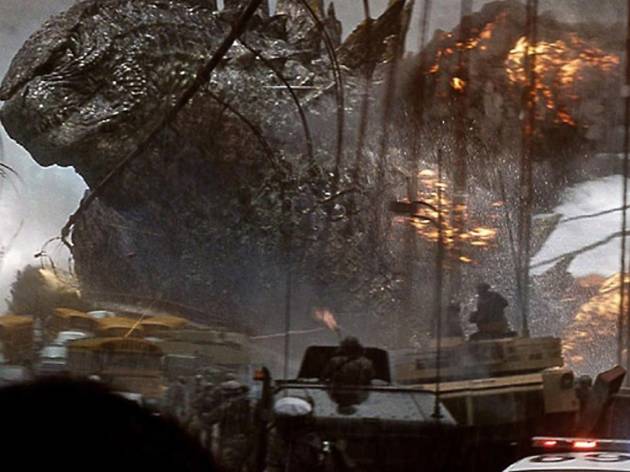 Godzilla has flattened Tokyo, made a fool of himself in New York and teamed up with a cute sidekick for a best-forgotten cartoon series. Now everyone’s favorite mean, green city-stomping machine gets the megabudget 3-D treatment courtesy of British director Gareth Edwards, whose 2010 indie fantasy, Monsters, seriously impressed. If all you need for a good time is full-on shots of wondrously realized CGI creatures turning toward the camera and giving an almighty spit-flecked roar, you’re in luck. But those hoping this Godzilla might have brains as well as bulk will find themelves crushed.

It starts strongly, with eerie stock footage of Pacific nuclear tests followed by a nail-biting opening sequence at a Fukushima-style power plant, bluntly but effectively echoing the original 1954 film’s post-Hiroshima atomic angst. Flash forward 15 years and we find chief engineer Joe (Bryan Cranston) obsessed with conspiracy theories about the accident, while his estranged son, Ford (Aaron Taylor-Johnson), tries to bring his dad back down to earth. Then something stirs in the deep.

As he proved in his DIY debut, Edwards is an absolute whiz when it comes to creature design. Godzilla himself is chunky, tactile and pleasingly old-fashioned, particularly in comparison with Roland Emmerich’s ornate, spiky lizard from the 1998 reboot, while his adversaries—like the winged, insectoid Muto (a.k.a. Mothra)—are delightfully grotesque. But his handling of storytelling is not so confident: Following a couple of gripping action scenes (and one frankly unforgivable plotting blunder), Godzilla settles into a simple, fairly standard cross-Pacific chase movie, traveling with the monsters from Japan to Honolulu (which gets beautifully decimated) and ultimately San Francisco.

The script is derivative and oddly humorless, and the characterization is weak: Fine actors like Sally Hawkins and Ken Watanabe have nothing to do but spout exposition, while a bland Taylor-Johnson is miscast as the square-jawed hero. It’s always fun to watch scaly, skyscraper-size behemoths lay waste to civilization, but a bit more human drama would have been welcome.