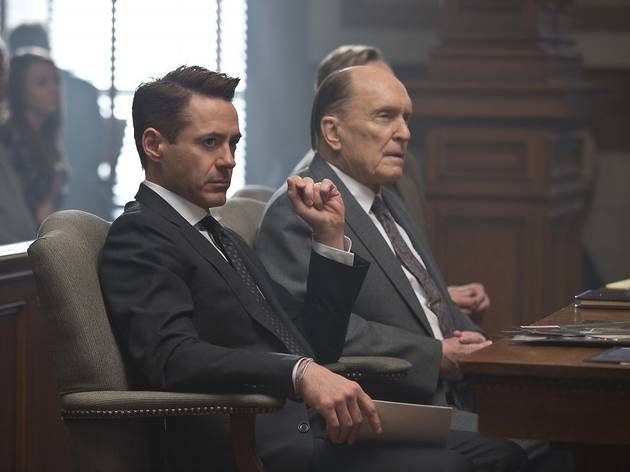 The sort of film that shouts where it could whisper and stomps where it could tiptoe – and not always in a bad way – 'The Judge' pitches a slick prodigal son, Hank (Robert Downey Jr), a self-obsessed, slick city lawyer, against his ageing, cantankerous father, Joseph (Robert Duvall), a blinkered provincial judge, still ruling over cases into his dotage. It's a melodrama of big gestures and even bigger weather, and there's pleasure to be gained from its old-fashioned charms, even if its various working parts – Janusz Kaminski's far-from-intimate photography; 'Wedding Crashers' director David Dobkin's comic leanings; the script's quieter moments; Downey Jr's inescapable vanity – rarely seem to be working in complete harmony.

'This family's a fucking Picasso painting,' spits Hank when he returns to his family's Indiana small town for the first time in years. Hank's mother is dead, and he's back for the funeral and to reunite briefly with his two brothers, one (Vincent D'Onofrio) who bears a grudge and another (Jeremy Strong) whose childlike mental state means he still lives at home, the innocent ingredient in a dysfunctional domestic stew. Elsewhere, one of Hank's old flames (Vera Farmiga) now runs the local diner, but it's her grownup barmaid daughter (Leighton Meester) to whom Hank unwittingly takes a shine.

Hank's brief homecoming soon morphs into a scenario that could give John Grisham a run for his money when his dad unexpectedly finds himself in need of legal counsel. Out of the blue, Joseph is accused of killing a no-good local in a hit-and-run car accident. It's lucky, then, that his son's a lawyer and the local courthouse looks like a set ready-made for the movie's third act. It's lucky, too, for Billy Bob Thornton: he gets to chew the courtroom wood-panelling as a smarmy prosecution lawyer.

A charismatic performance from Downey Jr and the growling presence of Duvall makes up for a multitude of sins in this big and brash family drama that puts the heavy emphasis on drama over family – so much so that a key late emotional scene is swallowed up by its surroundings and a central showdown between Hank and Joseph seems to catch even the filmmakers unaware. Yet there's a stream of provincial resentment and nastiness running through 'The Judge' that stops it from being entirely hollow. It's a simple story about a lost boy coming home that's over-cooked, over-decorated and sentimental. At the same time, though, it's rarely too cloying, and its bearhug energy and distracting cast just about act as fair compensation.