The best breweries in Austin

The best breweries in Austin are quenching your thirst for stouts, saisons, IPAs and everything in between

It’s a good time to be a beer geek in the capitol of Texas, which is now home to over thirty breweries (not to mention Austin’s best cocktails bars and wine bars). The best breweries in Austin (and Austin’s beer scene in general) have grown by leaps and bounds in the past four years—due, in part, to the June 2013 beer law reform which doubled the amount of malt beverages that Texas brewpubs could manufacture and allowed them to sell products directly to customers on site. So if you’ve already explored our city’s excellent craft beer bars and want to go straight to the source, be sure to try these favorites. 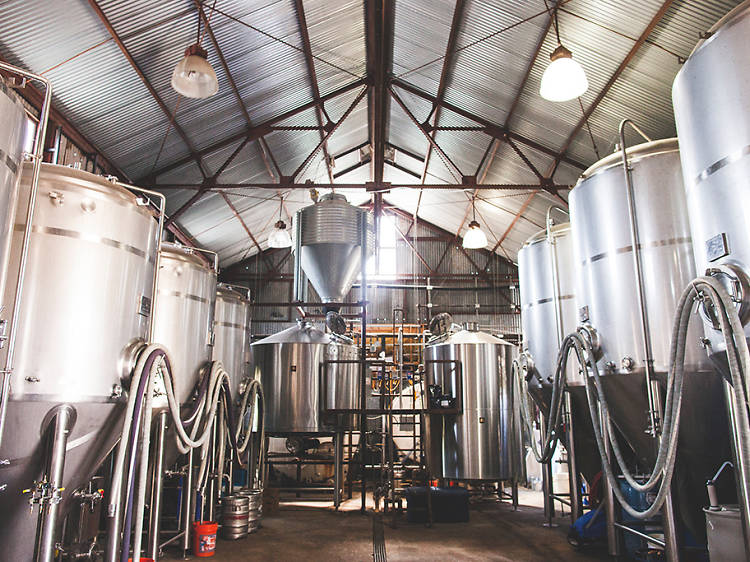 Since 2010, Jester King has been using spontaneous fermentation and native wild yeast to create unique farmhouse style ales. Each weekend, beer enthusiasts flock to their spacious Hill Country brewery and tasting room for free tours and small or large pours of their seasonal brews, as well as handpicked selections for the guest taps. The brewery has developed a cult following of sorts, attracting crowds for special releases. Standbys that are typically available include Wytchmaker, their floral farmhouse rye IPA, and El Cedro, a piney, hoppy cedar-aged ale. 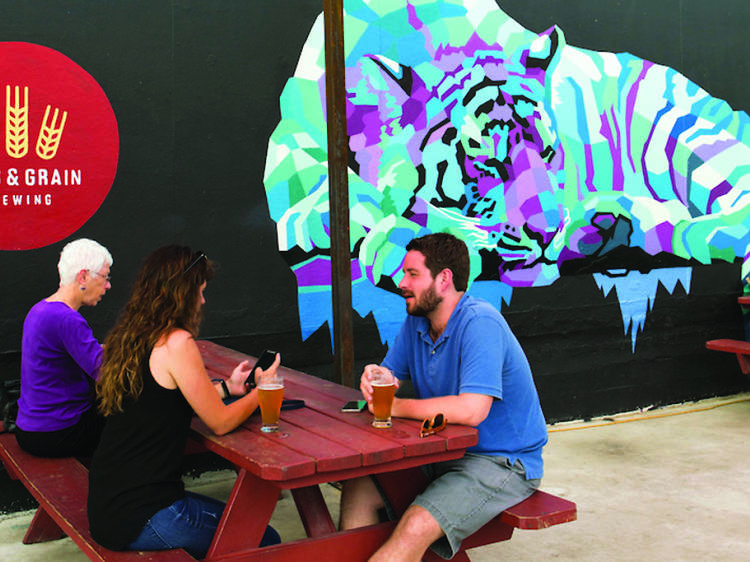 Since opening in 2010, East Austin’s Hops & Grain Brewing has been committed to sustainable brewing practices. They package all their products in recyclable aluminum, bake Brew Biscuits for dogs using their spent brewing grains and donate a percentage of their annual revenue to local environmental non-profits. Make a pilgrimage to their brewery to sample the latest Greenhouse beers, a rotating series of experiments available in small quantities and only at their on-site brewpub. Stay tuned for the team’s second location, set to open in San Marcos in the next year. 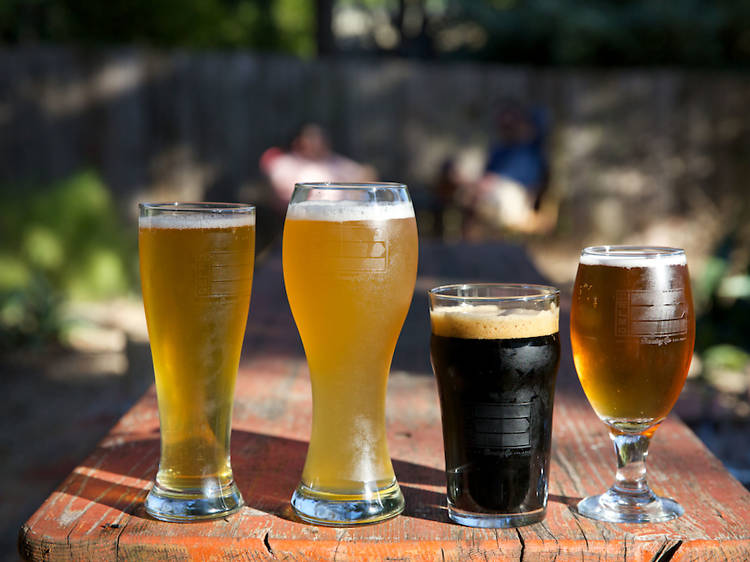 St Elmo burst onto the beer scene in fall of 2016, bringing fresh and nuanced bubbles to Southeast Austin. In addition to three year-round beers (Carl kolsch, Chico American pale ale and Angus dry stout), the brewery boasts a 15-barrel brewing system to craft a variety of rotating experimental brews. Thursdays and Fridays bring bluegrass and funk to the modern beer garden, and be sure to show up hungry because the flavorful Southeast Asian food at Soursop, the onsite food truck, is designed to pair with the beer. 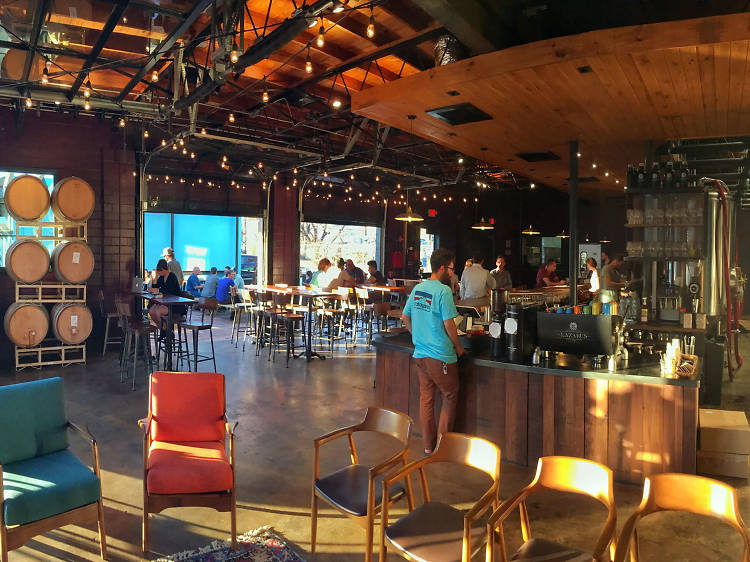 Early this spring, Lazarus Brewing Company opened a brewpub on East 6th Street with 16 taps of well-crafted beer, from the Amandus (Belgian strong golden ale) to the Naked Sapphire (single hop German pils). Can’t choose one? Order tasters for just $2 each and create your own flight. Then prove your allegiance by paying $1,000 for a hand-blown glass chalice and become a Patron Saint of Lazarus, earning free beer for life. 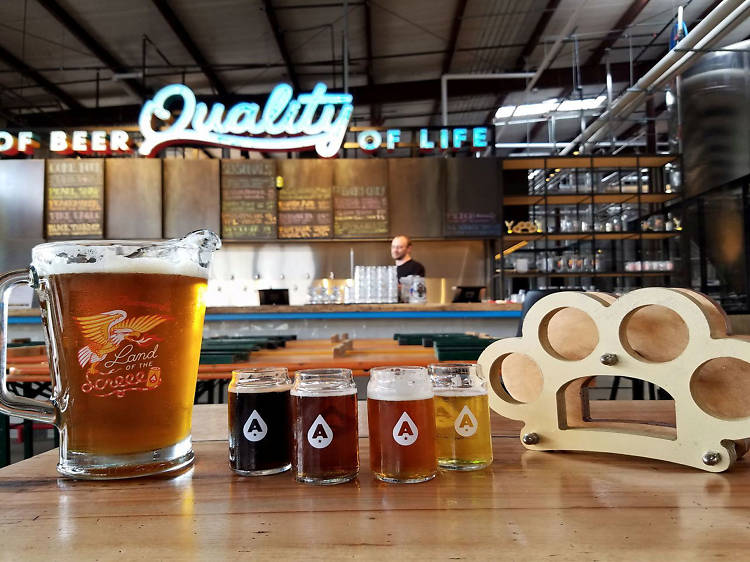 Austin Beerworks' brightly colored cans have become ubiquitous since the brewery opened in 2011. Their Core Four beers are Fire Eagles IPA, Black Thunder schwarz, Peacemaker pale ale, and Pearl Snap pils. However, they also brew coveted seasonals, like the current Golden Fist, a Belgian-style pale ale, and they offer exclusive special releases only available at the brewery. $10 tours (Thursday through Sunday) come with a brewery pint glass and three pours. 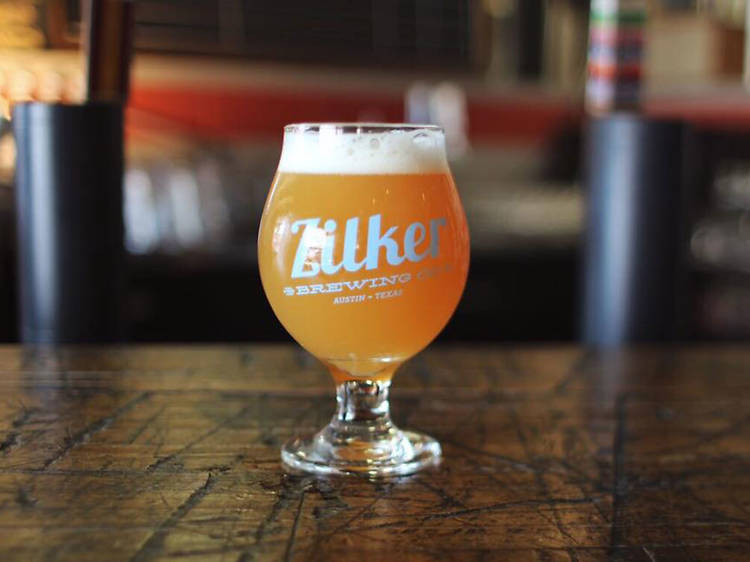 After winning a gold medal for their Marco IPA in a homebrewing competition, brothers Forrest and Patrick Clark launched Zilker Brewing Company’s intimate eastside taproom with their friend Marco Rodriguez in spring of 2015. All the core beers are brewed using Trappist ale yeast, which adds depth of flavor to mainstays like the honey blonde and the pale ale. Try the Parks and Rec pale ale, which was created with four different types of hops to celebrate Zilker Park’s 100th anniversary. 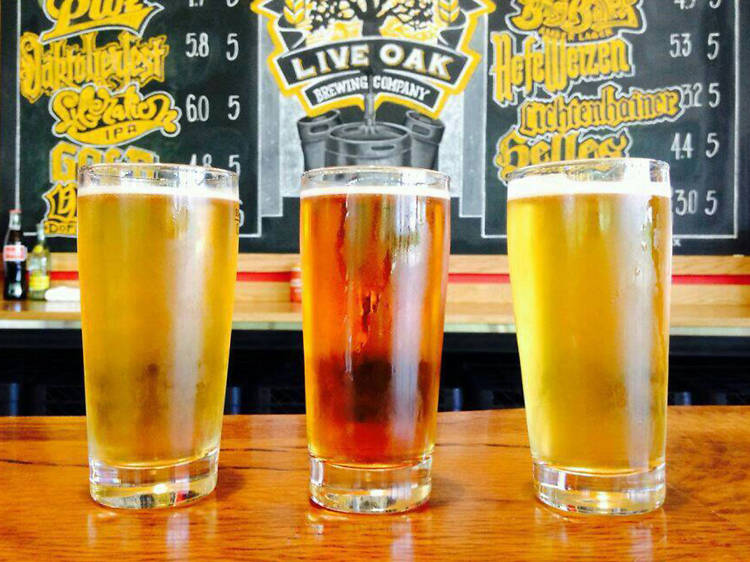 Since 1997, Live Oak Brewery has been crafting old world style lagers and ales using a signature mash and open fermentation. Two years ago, the eastside brewery expanded to a spacious taproom along the Colorado River, with a live oak-shaded biergarten ideal for sipping their iconic hefeweizen or pils and enjoying food from rotating vendors. 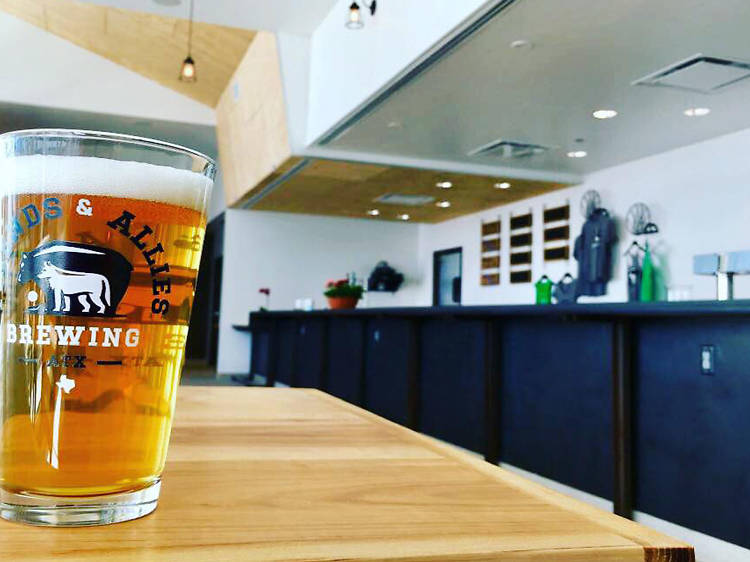 After launching their West Coast stye beer over a year ago, Devin Ponds and Ben Sabin opened Friends and Allies in the spring of 2017, with head brewer Nathan Crane crafting the suds. Now fans of their Noisy Cricket IPA and Urban Chicken saison can enjoy those—plus other core beers and rotating specials (you've probably heard about their ImPeach saison by now)—straight from the (30-barrel) source at their spacious brewery in East Austin. 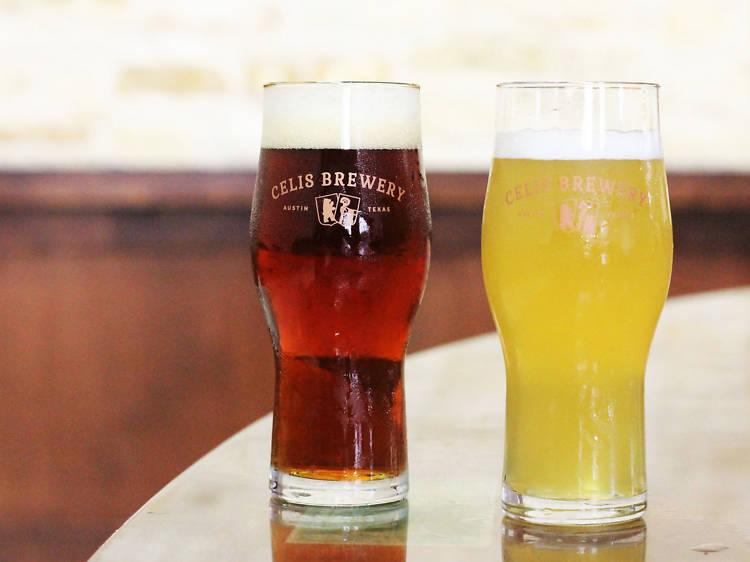 In 1992, brewer Pierre Celis moved to Texas from Hooegarden, bringing Belgian-style wit to Austin and introducing the city to craft beer with the opening of Celis Brewery. He reluctantly sold his production to Miller Brewing Company in 2000, but now his daughter Christine is resurrecting the original brewery in his name, bringing back brews like his original Celis White (made using yeast smuggled from Belgium) alongside new creations like the Citrus Grandis, an East Coast-style IPA. 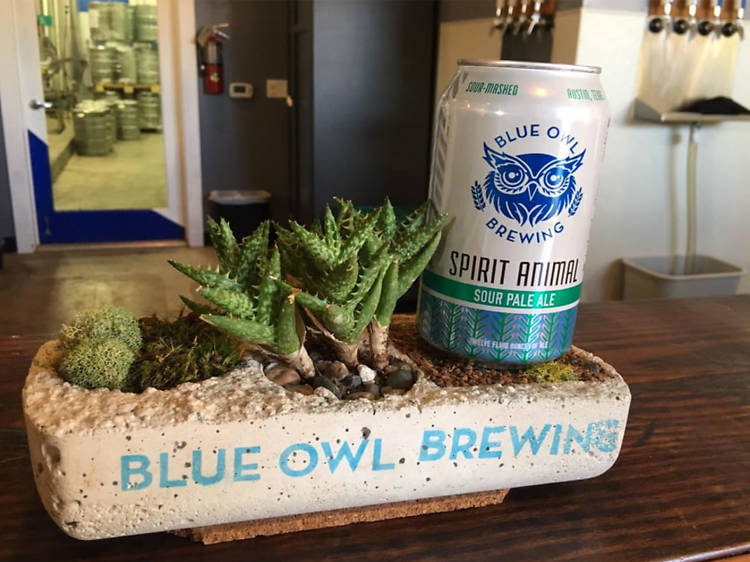 Blue Owl Brewing uses a sour mash to create an inventive line of tart canned brews like the Little Boss (sour session wheat) and the Spirit Animal (sour pale ale). Find these mainstays and more at the eastside tasting room, which offers self-guided sensory tours ($8-15) and events like music, bingo and workshops. 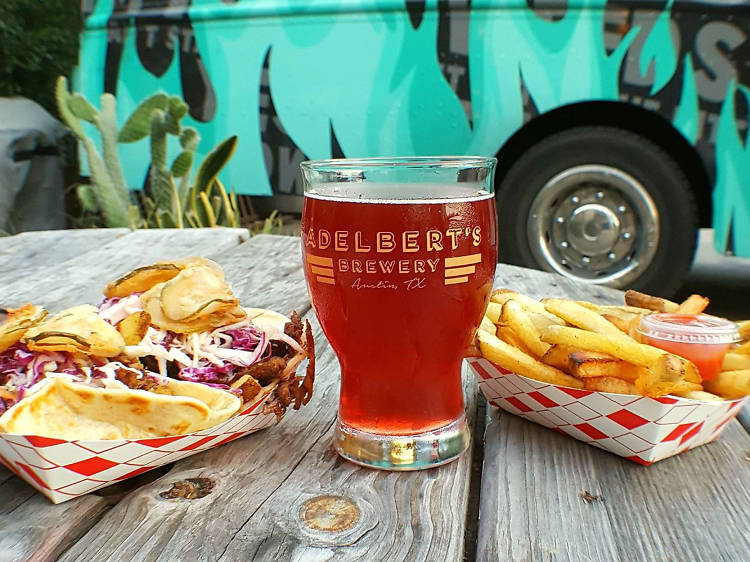 Founded in 2011, Adelbert’s specializes in Belgian-style, bottle conditioned ales made using non-GMO malted barley, Noble hops and fresh yeast. Philosophizer saison, Naked Nun wit ale and Scratchin’ Hippo bière de garde are a few of the mainstays, all poured from 750 mL corked bottles. Fridays and Saturdays tours come with a souvenir glass and six pours for $14, and individual beers and bottles are also available in the tap room, which features yard games and rotating food trucks. 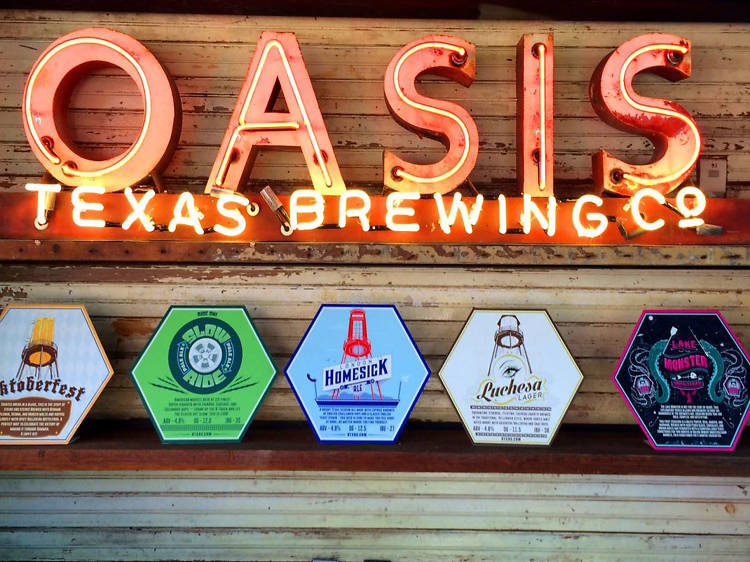 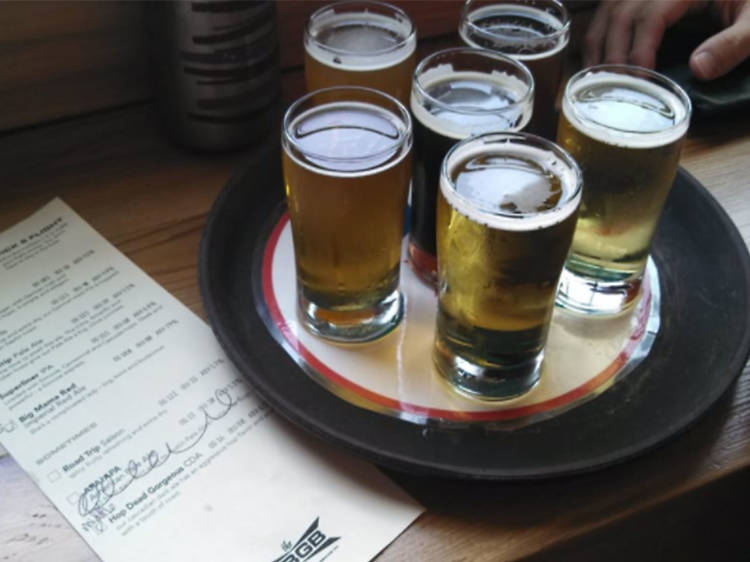 On any given sunny weekend, this popular South Austin brewpub is typically packed with revelers, enjoying pitchers of their German-style Industry pils and juicy Day Trip pale ale. Even if there isn’t a show or event taking place, the pizza-focused menu and sprawling, dog friendly patio is enough to appease the masses. 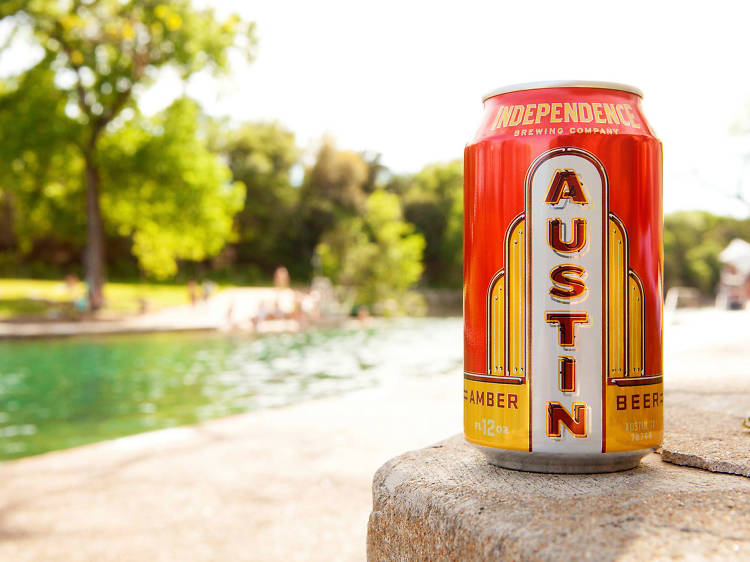 Since 2004, Independence Brewing has been brewing out of their South Austin facilities, providing the city with mainstays like Stash IPA and Austin amber. In the past few years, they also began canning their brew, making beers like Power & Light pale and and Redbud Berliner weisse essential for lakeside lounging and party coolers. The tap room is open for tours and tastings Thursday through Sunday, and a portion of proceeds goes to Service Dogs Inc, a non-profit which provides hearing and service dogs to people living with disabilities. 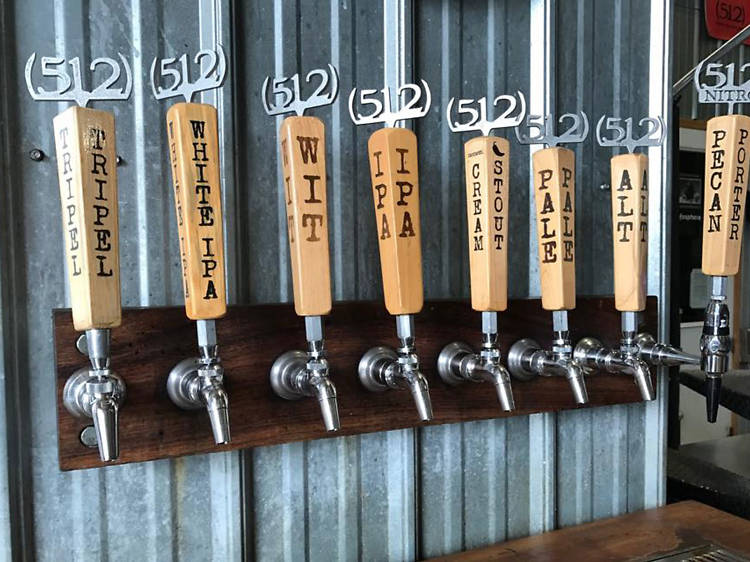 (512)’s English and Belgian style Four Core (wit, pale ale, IPA and pecan porter) have become ubiquitous in our city, but visit the brewery for a deeper look behind the scenes and tastes of special wild, sour, nitro and barrel-aged projects. Saturday tours include a glass and six tastes for $12.

Find some more of your favorite beers here 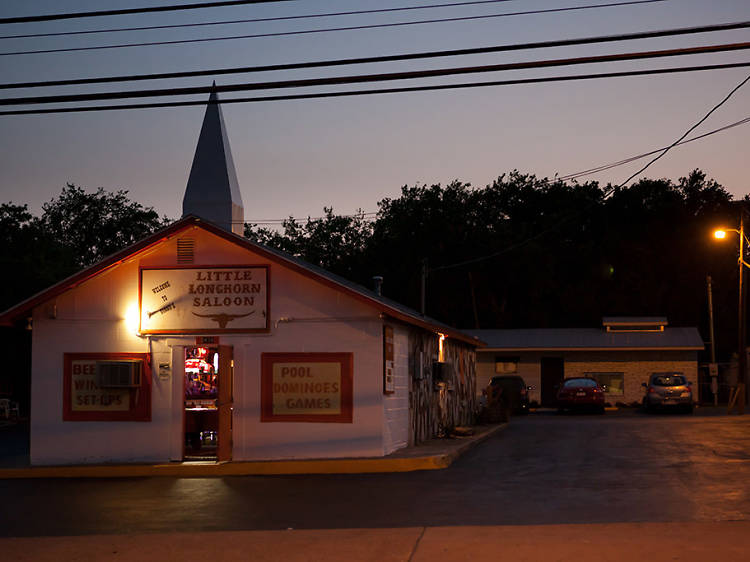 The best dive bars in Austin

These dive bars are serving some of Austin's best craft beer.