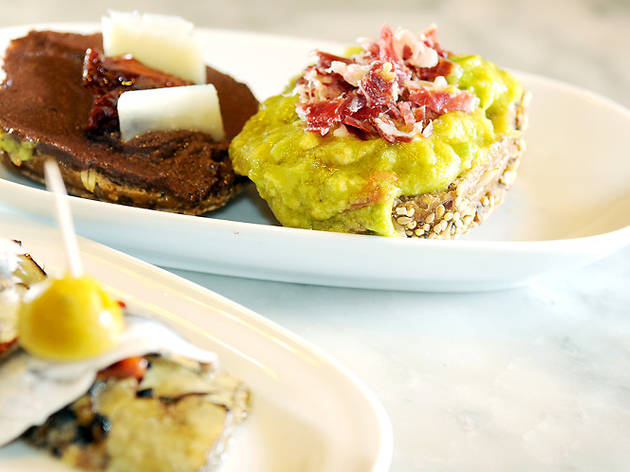 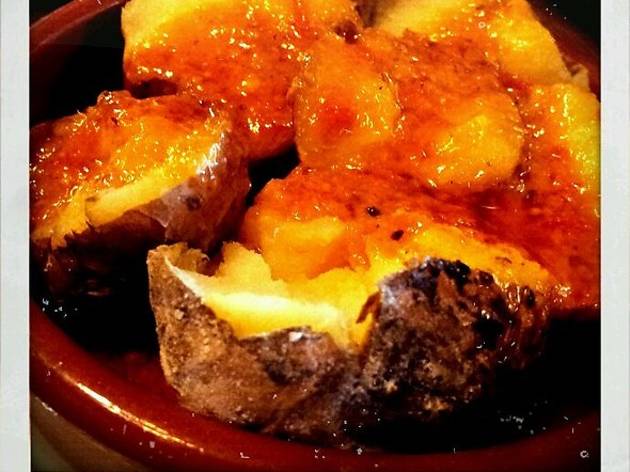 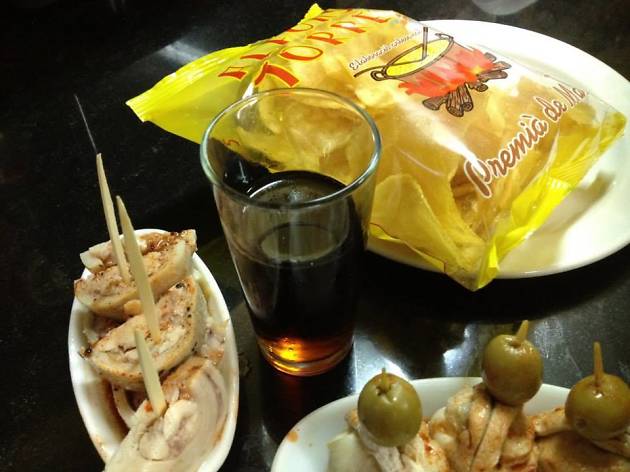 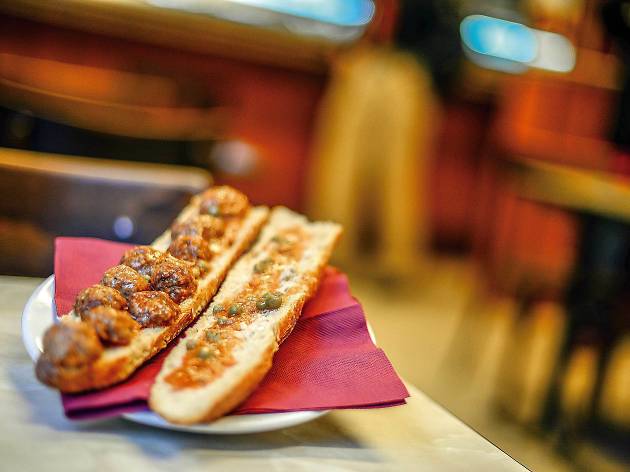 Not all young landlords set out to create a replica of their favourite bars. Some take over the family business: we’re at Can Ros (Roger de Flor, 303), where Cristian Ros tells us that his whole family – mum, dad and their five children – work in the bodega. For those in the know, just to step into its cool depths is enough to set the stomach rumbling. They’re not short of customers: they’ve built a multigenerational clientele based on years of service. ‘We buy all the ingredients fresh from the market and cook them ourselves,’ Ros tells me. They’re specialists in gutsy, hearty tapas: plenty of them feature pork, but their pork scratchings, the 'capipota' (literally 'head and foot' pork stew) with vinaigrette, and the fried pigs’ ears should be protected species. And their omelettes – the salt cod with garlic and parsley is spectacular – are the stuff of urban legends. At midday, they have vermouth, dry Priorat red wine, Moscatel and white wine from Gandesa on tap. The tapas menu is huge and hugely impressive: the modest cover of the menu gives no clue as to the content.

In fact, when you go out for an aperitif in Gràcia, you’ll see hardly any trendy youngsters. The scene at Vermuteria Lou (Escorial, 3) is more diverse, but no less friendly and traditional. Incidentally, the name doesn’t refer to the late leader of The Velvet Underground, but to the landlady, Lourdes Branca. This is an oasis of tapas and high-quality tinned goods, which make a somewhat Baroque impression, due to the sheer volume of comestibles packed into a minute bar. All their vermouth is Yzaguirre on tap, and as well as an earthenware dish full of artichoke hearts stuffed with mince and foie gras, their own take on the potato bomba, and other hot delicacies – up to 25 different dishes – one of their most successful appetisers is a mixed plate of cockles, razor clams, olives, tuna, mussels, assorted shellfish and escavalida (roast pepper and aubergine salad) for only €12 – and ideal for two to share.

All the high-flown talk – a little snobbish, to tell the truth – about the superlative quality of vermouth from Tarragona, and tinned foods with cool marketing campaigns, is brought to earth with a crash when we cross the threshold of La Vermuteria del Tano (Joan Blanques, 17). We are served by co-owner Maricel, and feel as if she were welcoming us into her own home, not as if she were doing us a favour, as is all too often the case. ‘We’ve been serving the same Campmany vermouth for 23 years, and we’ve had plenty of sales reps trying to take us for a ride. But we’re loyal to the brand that puts bread on our table,’ she tells me. I drink a short glass straight up – it’s excellent – while she explains ‘no soda water, no ice cubes, nothing, because a weekend afternoon here is like a war.’ Every day they make their own sauce to serve with crisps, and fresh sandwiches. But after midday all eyes turn to the board listing tinned delicacies and their own special combos, with irresistible treats such as artichokes with vinegar-cured anchovies, moixama with cheese, and stuffed cucumbers. This is the real deal.

It would be unfair to label the Monteros’ bar a metavermut. In 2010 these two brothers from the Catalan town of La Llagosta took over Bar Bodega Quimet (Vic, 23), and they have been key players in the regeneration of the aperitif. The bar hasn’t lost an iota of its dusty charm, but they have added a battalion of high-quality tinned goods and pickles and their own original combos – a confit of pear tomatoes with salt cod and ham, for example – and popular mixed platters: for €9, the house special includes tuna, cockles, razor clams, roast peppers, anchovies and 'pa amb tomàquet' (typical Catalan accompaniment of bread smeared with tomato, oil and garlic). And their army of wines by the glass is a sight for sore eyes. They tell me that the 20-minute aperitif is rare here: ‘At the weekend we have to throw people out at five – some are here for three hours at a go.’ La Bodega Lo Pinyol (Torrent de l’Olla, 7) has been refurbished with a personal touch, the work of two arts promoters: you can pop in for an aperitif and find a classical concert.