It may not be the prettiest hotel in the city but its location is ideal when it comes to transportation both around the city and to/from other places. Plus it has a great rooftop pool and bar, and shopaholics are well-placed to indulge their passion.

Part of the Spanish Expo Hotel chain, this four-star hotel seems to mainly describe itself as ‘functional’. We’re not going to argue with that but there are still many more enticing features that make it worth staying there. While the building and its immediate surrounds (which include Barcelona’s main train station, Sants-Estació) are not overly appealing, the Expo Hotel is just one metro stop away from the centre of town, and if you’re catching a train or plane onwards at the end of your trip, you could hardly be better located. What’s more, in the warmer months the rooftop pool and Terraza Urban BCN bar provide a great place to relax as you taken in the fabulous city views, including of the nearby Montjuïc ‘mountain’ and its emblematic buildings. Rooms are comfortable and the decor throughout is simple and modern; a bonus is that every one of the 423 bedrooms has a balcony. In essence, this is a place to sleep and take a break after a busy day doing stuff elsewhere, whether that’s business meetings or seeing the sights. And if shopping is high on your Barcelona to-do list, the Expo Hotel is an excellent base. Three shopping centres are within easy access, including the converted Las Arenas bullring, which you can get to on foot in less than 10 minutes; the other two, Gran Via 2 and L’illa, are each a short bus or metro ride away.

Location: This is one of the city’s best connected hotels. Located right next to Barcelona’s main train station (which is served by high-speed services to Madrid and Paris as well as two metro lines and regional trains), numerous buses also stop close by, while a ten-minute walk away you can catch the Aerobus straight to the airport. The immediate area is somewhat lacking in soul but head to the nearby neighbourhood of Sants for a more authentic taste of the city.

Nearby:
Las Arenas: With support for and interest in bullfighting in Barcelona on the decline for some time (it's now officially an anti-bullfighting city), some other use had to be found for its historic bullrings. In the case of this one, located on the busy Plaça d’Espanya, the option was to convert it into a commercial centre, with shops, cinemas and a rooftop with restaurants and a 360º viewing platform.

Parks: If you’re staying at the Expo Hotel with kids, there are two great parks nearby where you can take them for that all-important play session. Just down C/Tarragona is the Parc de Joan Miró, which has various play installations for kids, including zip lines, slides and bridges, a café you can relax in as they run around, and the striking ‘Woman and Bird’ sculpture by the Catalan artist Miró, which was his last public work. On the other side of the hotel is Espanya Industrial park; standing on the site of a former textile factory, it includes a huge iron dragon that’s also a slide and a large artificial lake.

Nectari: Treat yourself to a top-notch meal at this Michelin-starred restaurant that’s the work of young Catalan chef Jordi Esteve. He combines quality, creativity and tradition to create dishes such as gazpacho with lobster, trout tartar with salad mousse, and scallops with truffle and fish foam; plus there are dishes suitable for coealics.

Good for: Business travellers who want functionality and don’t want to be out in the sticks. Anybody else who likes to be near public transport and/or shopping centres

Time Out tip: One of the most economical ways of using public transport in Barcelona is the T10 ticket, which gives you 10 trips on metro, bus, train or tram for under €10 and can be shared by up to 10 people. What’s more, you can also use it to take the train (but not metro) between Sants and the airport, making it significantly cheaper than the other options on offer. 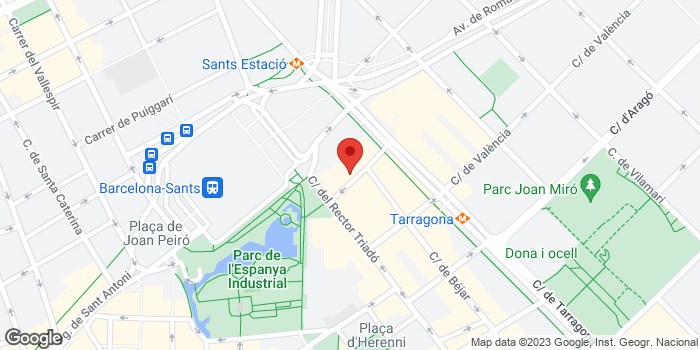