With an incredible location, real attention to detail, and newly refurbished rooms, the Barcelona Catedral hotel is a fantastic choice for getting the most out of a trip to the city.

While this hotel has just 80 rooms, it goes big on services, location and comfort. Recently renovated, the bedrooms are warm, calm and comfy: you have the choice of one king or two twin beds, the duvets are feather and a pillow menu is available. For a post-sightseeing swim session, head up to the roof for a dip in the elongated pool and the chance to relax on one of the loungers; you get a great sense of the city from this spot, as the rooftop has views over numerous other buildings, letting you see washing lines and satellite dishes as well as church spires. For lunch during the week, it’s worth checking out the 4 Capellans restaurant. Not only is it bright and spacious, the menu is based around fresh local produce and there’s even a dish using an 18th–century recipe. All in all you really get a sense that the team at Hotel Barcelona Catedral want you to have a great time when visiting the city. Offering extras such as free bike hire and twice-weekly free walking tours, as well as the chance to take a cooking class or get all the essentials so you can indulge in a romantic night in with your partner, it’s clear they’ve taken the time to think about their guests as real people.

Location: You’re right at the heart of the city with things to see and do as soon as you step outside the hotel. Plaça Catalunya and La Rambla are a short walk away, as is the trendy Born neighbourhood, the tempting Santa Caterina market and the stunning modernista Palau de la Música Catalana. And if all that doesn’t keep you occupied, metro and bus stops are almost ridiculously handy as well so you can move easily around Barcelona.

Shunka: One part of a family of first-class (and, yes, rather pricey) Japanese restaurants, this one features a sumptuous range of sushi as well as filling soup and noodle options.

It Reminds Me Of Something: Take home a memorable souvenir or gift from this self-described Art and Craft Gallery, which features an eclectic mix of works by designers and creatives who are based in Barcelona; pieces on sale might include ceramics, artwork and leather bags.

Le Cucine Mandarossa: This is Italian food as it really should be done, based on recipes and products sourced from family. The collective effort works so well that the queues for a table at lunchtime are rarely insignificant. The space is compact with an original decor, and the food… the food is simply delicious.

El Paraigua: While the ground floor of this bar just off Plaça Sant Jaume is fine, head downstairs to an atmospheric stone-walled basement full of arches and sofas, plus a small stage and even an area to dance. Order one of their innovative cocktails and savour the ambience.

Good for: True city lovers who want to really feel part of the places they visit and who know the importance of quality touches and extras that can enhance their travelling experience.

Time Out tip: Visit one of Barcelona’s quirkiest historical monuments: the Temple of Augustus. Or at least what remains of this monument dating from the Roman era, when Barcelona was Barcino. You’ll probably need a map to get you to the tiny side street of Paradís where four columns of the temple stand. Three of them were discovered in the 19th century, when the headquarters of the Catalan Trekking Centre were being built (the fourth was found later in a nearby spot); and today the columns are still integrated into that edifice and surrounded by walls of a rather vivid green. 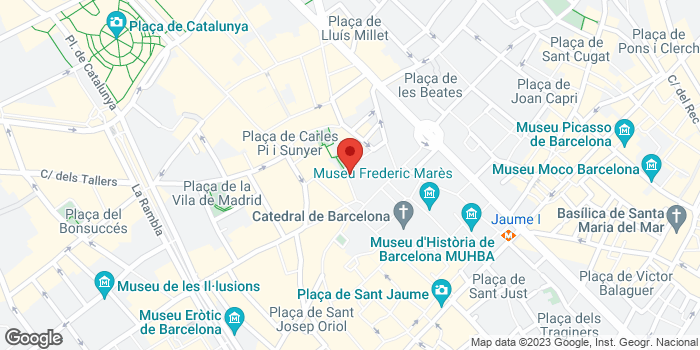