A sleek, modern hotel on the edge of Plaça Glòries and the neighbourhood of Poblenou, which have both undergone a lot of development in recent years, making this an ideal place from which to explore the city. As well as the great location, the hotel's rooftop has a pool, bar and restaurant, and splendid views of Barcelona.

This is an excellent example of getting a chain hotel right. The Novotel City Barcelona, part of the French Accor group that offers a variety of accommodation options around the world, offers a winning combination of location, design and services. Rooms (the lowest of which are on the 7th floor) are bright, well-appointed and have a contemporary look. Even the standard rooms have extras such as free tea and coffee, while in the more upscale bedrooms, privileges include a Nespresso machine, soft drinks and herbal teas. Effort has also been made with the hotel’s amenities, which include an impressive corner pool on the 19th-floor rooftop plus the Zity Bar, for enjoying a cocktail as you admire views such as the nearby Torre Glòries whose façade provides an impressive evening light show. For dining, there's a restaurant that focuses on Mediterranean dishes while the breakfast buffet is extensive. Families are well looked after at Novotel, thanks to the games area and specially adapted bedrooms, kids’ menus and free breakfasts. And for those who like to really take care of themselves, there’s a hamman and gym on site.

Location: It’s spot-on if you like to have lots of amenities to hand but don’t want to be in the middle of the crowds and prefer to be away from the typical tourist sites. The area around the hotel has seen a lot of recent improvements, and you’re close to shops, restaurants and bars, while beaches and the city centre are a short journey away on public transport (or walkable if you’re feeling in the mood).

Glòries shopping centre: Right opposite the Novotel City is this commercial centre that has just undergone a renovation, and features new arrivals like Uniqlo, Kiehl’s and L’Occitaine. There’s also a good range of restaurants and cafés.

DHUB: Minutes away from the hotel, you’ll find the Barcelona Design Hub, a recent construction that includes the city’s Design Museum, which has numerous collections including clothing and ceramics, and a municipal library.

Encants: If you’re a fan of browsing, you mustn’t miss out on a visit to the Encants flea market, located just past the DHUB. Long a part of the Glòries landscape, it moved to its current home under the shiny, wavy roof just a few years ago, but has lost none of its spirit of haggling and bargain-hunting.

El Tío Che: Get a taste of both the traditional side of Poblenou and delicious treats at this ice cream parlour and 'horchateria' on the semi-pedestrianised Rambla del Poblenou (which has been voted the city’s best street by readers of Time Out Barcelona in the past).

Bodega Bar Carol: This low-price wine bar not only specialises in vino but is also a kind of paradise for cheese lovers. They also serve an array of savoury snacks including cured meats and croquettes. Don't be fooled by the somewhat shabby appearance; this is a five-star bar in a two-star disguise.

Good for: People who like to do a bit of everything when on holiday; from this hotel you’re within sneezing distance of the beaches, the city zoo, the Design Museum, a huge flea market, a just-renovated commercial centre and various parks, while the city centre is easily accessible by public transport.

Time Out tip: For an evening experience with a different, head to the square in front of the DHUB. This open space lights up when darkness falls. But it doesn't light up randomly. There are speaking tubes built into the ground, which passers-by can speak, sing or shout into, and a program generates synaesthesic effects produced by lines of LEDs in the ground. This light installation, a combined effort by David Torrents, Maurici Giner and Rebeca Sánchez, has the wonderful title of 'Bruumruum!'. Check it out. Light it up. 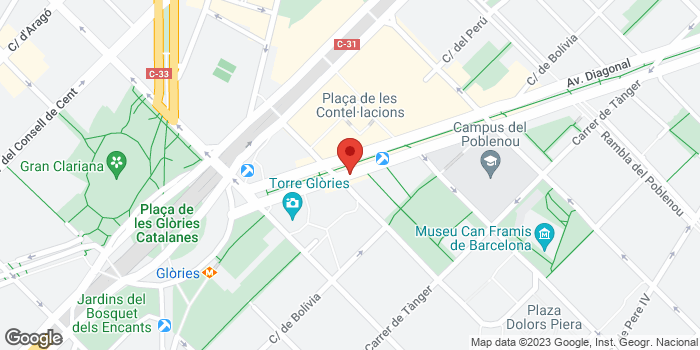