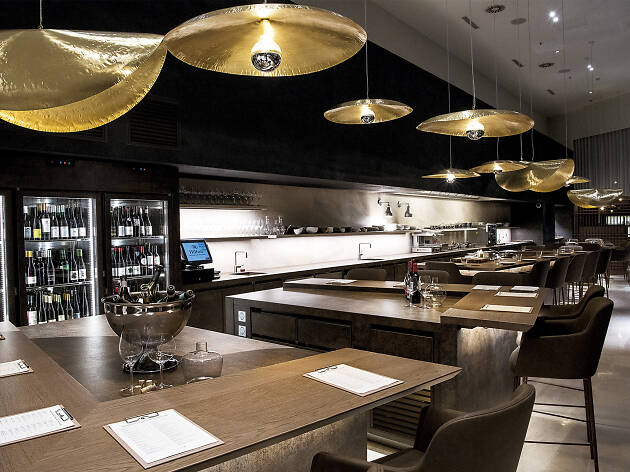 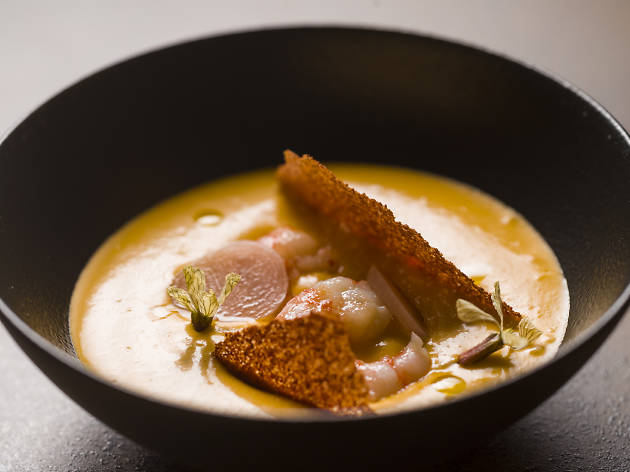 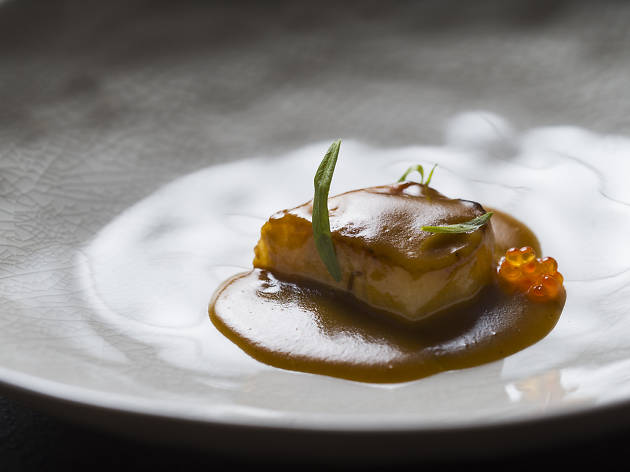 After a time sharing a kitchen with the family chicken roasting outfit, Artur Martínez explains he’s moved up to sharing space with a 400-room hotel. How did that come about? Martínez wanted to move his El Capritx (which was the smallest Michelin star restaurant in Europe, seating just 12 diners at a time) from Terrassa into Barcelona, and ended up opening Aürt in the Diagonal Mar Hotel, which was awarded its first Michelin star in November 2019. Aürt does mean something in Catalan, if you’re curious: a sudden hit or blow. And it seems to describing what Martínez and Aürt have done, that is, create a concept that didn’t exist on the local gastronomic scene, with one swipe changing definitions with the ironic label of ‘posh street food’ or ‘lobby food’.

Integrated into the hotel lobby – you’re practically hit with the restaurant when you walk into the hotel, another nod to the name – Aürt is a space that seats 17 guests, divided into a small table for six, a large table for eight, and one smaller round table for anyone who wants a bit more privacy. And all the cooking is done before your eyes, as each table or bar area features an induction cooker, and the ‘office’ is equipped with a griddle, oven, grill and a wood-burning stove. Says Martínez, ‘The physical separation with the diner dilutes conversation, so you miss out on information.’ Since 2017 the chef has been creating a theory, and he started his new stage with what he describes as a continuing of a Capritx tasting menu that’s been made more radical and deeper, now that they have done away with logistical limitations.

Martínez uses the term ‘local exoticism’ to define his cuisine. The tasting menu comes in at 14 dishes for at €95, where, following the apparent obviousness of items such as bonito with vinaigrette or prawn ‘salmorejo’, Martínez and his team put their food in and out of context and reinvent it into comprehensive marvels that open up new worlds for all the senses. Another surprise is what’s on offer in the Ma’i lobby, where Martínez has reinvented the concept of the hotel bar/restaurant with signature tapas, and a drinks menu light-years from the dull, overpriced, and just plain poor execution you often find in hotel bars (even luxury ones). Here local products shine in all areas: ‘If I didn’t prepare my work here as a showcase for local products,’ says Martínez, ‘my being here wouldn’t even make sense.’