48 hours in the Western Catalan Pyrenees

Peaks that reach almost 3,000 metres in height, dozens of natural lakes, rivers offering adventure sports, a wealth of Romanesque architecture, picture book villages... The Western Catalan Pyrenees, which for the purposes of our trip coincide with the borders of the counties of Lleida, offer endless possibilities. But with only two and a half days to play with, we will have to make some hard choices. We will always have the chance to come back on another occasion but for now we will have to make the most of our time.


The Cerdanya has a long history of administrative and territorial divisions. One part lies over the border in France, and on this side of the frontier, half of the land belongs to the province of Lleida and the other to Girona. That is why the Cerdanya appears in both the getaway to the Eastern Catalan Pyrenees and in this outing to the Western Catalan Pyrenees. We will begin here, close to the village of  Bellver de Cerdanya, in a hamlet called Talló, with a grand church named Santa Maria de Talló, which also has the well-deserved nickname of the Cathedral of the Cerdanya. We recommend that you visit it. Its current foundations date from the 12th century, though there are traces of earlier elements. It is in the Romanesque style and was declared a site of national cultural interest 20 years ago. Inside we will find a wood carved image of the Virgin Mary dating from the 13th century, one of the few original examples of Romanesque art to be found in its original location.

Let's change the subject completely now, while staying in the same region. In Martinet, a village standing on the River Segre, we will visit the Casa del Riu (River House; pre-booking on 93 824 41 51), an interpretive centre for the Cadí-Moixeró Natural Park, focussed on river ecosystems. From here we can begin a pleasant walk along the river following The Otter Route. There are a number of information panels on the trail that will tell you all about the otter's life and behaviour and with a little luck and patience you may even spot one. We will have to wake up early today to make our way to the village of Tuixent in the Alt Urgell. This is a land of medicinal plants, and this village is wise to the fact. There is a long tradition here, reflected in the local museum, of sayings by were known as trementinaries -  women who collected herbs and plants, prepared and processed them and spent long periods away from their homes selling their mixtures. The best-known product they sold was trementina - turpentine - hence their name. And the museum, the Museu de les Trementinaires  makes for an attractive visit that can be completed by calling in at the botanical gardens on the outskirts if Tuixent, where you can find out about the properties of the local plants.

The Lleida Pyrenees is an area rich in museums specialising in a wide variety of subjects, so we propose that we end the morning visiting another one (though we will also have time for other types of activities): the museum of Raiers, set in the Roser chapel in Coll de Nargó. Raiers were men who made rafts made of logs who transported them down the rivers Segre and Noguera Pallaresa. In the museum you will find tools and vintage photographs. The story of the raiers has reminded us of the fact that this part of the Pyrenees is strong on water-based adventure sports. So, let's head for Sort, the capital of the county of Pallars Sobirà, to choose one of the many companies that offer adventure activities. For example, Rubber River, which defines itself as the "dean of adventure sports organizations". And if choosing an organizor was difficult, choosing an activity is anything but easy because there are so many on offer - rafting, hydrospeed, kayaking, canoeing... Each activity has its characteristics and difficulties but all of them will ensure that we have a fun time while descending the waters of the Pallaresa. And if we have enough time and energy, a good way to explore the hidden corners of the region is on horseback. There are plenty of organizations to choose from and Turisnat is based in Sort itself.  There are different routes and durations and no previous horse-riding experience is necessary. Advance booking is recommended both for the white water and the horse riding activities. After giving a lot of thought to how to spend our last day in the Western Catalan Pyrenees, we have decided to head for the Vall d'Aran, known as "the small Catalan Switzerland". It is another singular county, both in term of its constructions and its climate, which is clearly influenced by the Atlantic. We think that a good way of getting to know its patrimony and villages is by following the Romanesque Route, which will take up all the afternoon. But this morning it is time to visit a mine! It bears the name Victòria and is accessed by road from Bossòst, and first opened for production in 1912. It saw frenetic activity until the outbreak of the Spanish Civil War and was still working for a time when the war ended. It has been open to the public since 2004 and there is a tour of its galleries that can last up to three hours.

Upon leaving we can get a taste of the landscape of the Aran valley by heading for the source of the River Juèu, where a powerful spring of water emerges from its underground course from Forau d'Aigualluts in the neighbouring Aragon. To get there, you have to go to the village of Es Bordes, and continue along the Artiga de Lin valley and, seven kilometres along a tarmac track until you reach a parking area. The springs are some 200 metres away. We recommend that you take the circular route that is signposted from the bridge. It will take less than an hour and is fairly flat and very beautiful. The Romanesque art and architecture of the Vall d'Aran may not be as well-known as that of the neighbouring Vall de Boí, but a visit to its numerous churches is unlikely to disappoint. We will start at the church of Sant Andreu in Salardú, which contains a Romanesque masterpiece in the form of a carved figure of Christ, before moving on to Santa Maria d'Arties, which has been declared a site of national cultural interest, Sant Pere d'Escunhau, with its surprising portal, and Sant Miquel de Vielha, where we will find the Romanesque image of the Christ of Mijaran. We will also find interesting churches in Betren, Gausac, Casau and Les, while in Vilamòs we will be surprised by a set of funerary stelae dating from the Roman era embedded in the walls of a Romanesque church. Take your time to explore the narrow streets and stone houses in these villages, as well as the landscape surrounding them, until your legs start asking for a well-deserved rest. By public transport: We started our trip near Bellver de Cerdanya. The nearest train station is at Puigcerdà (902 24 02 02 / www.renfe.es). The Alsina Graells company (902 42 22 42 / www.alsa.es) provides bus connections from here to Bellver and other towns and villages in the area.
By car: The most direct route from Barcelona is via the C-16, passing through the Cadí tunnel. 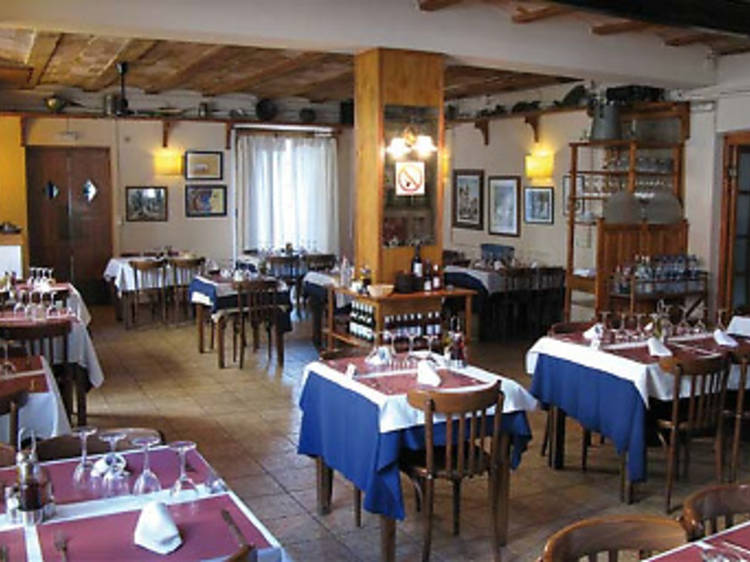 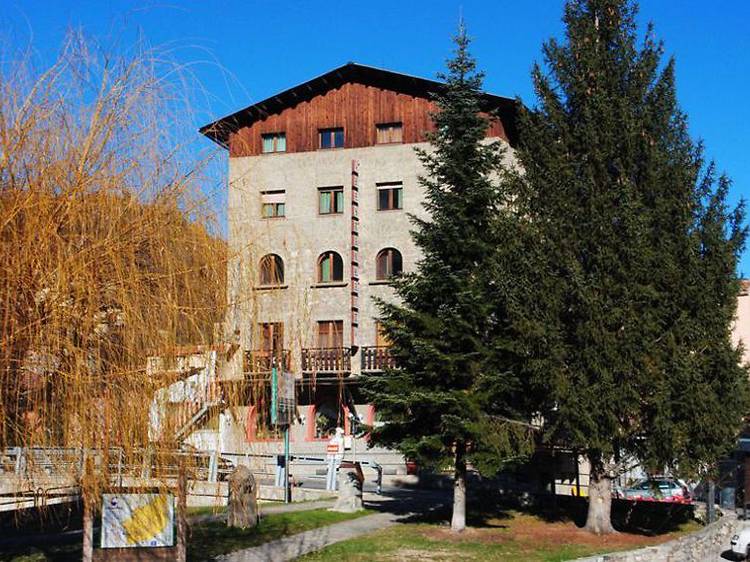 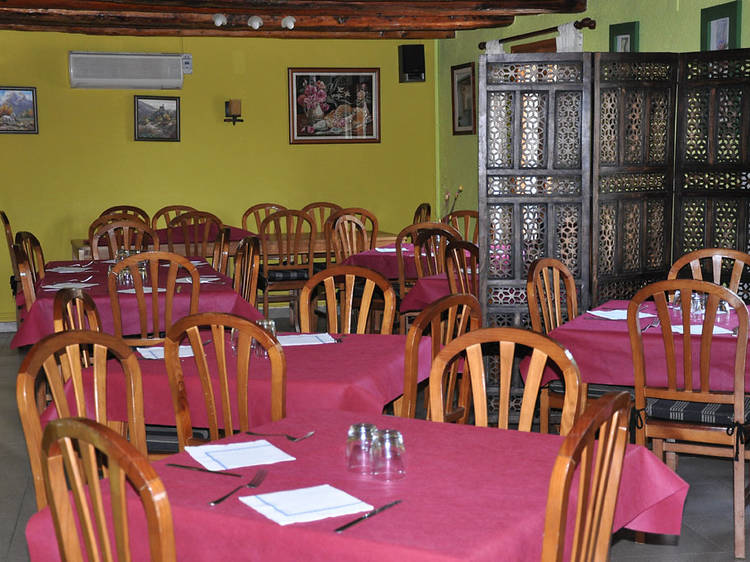 Located in a quiet but well connected spot, this restaurant offers specialities from the Vansa valley, including the star dish wild boar, using organic products from its own garden.
Fixed price menus from €12 to €19. A la carte €30. Open every day.
Family-style welcome. Carretera de la Vansa, s/n. Tel 973 37 00 21. www.molidefornols.com. 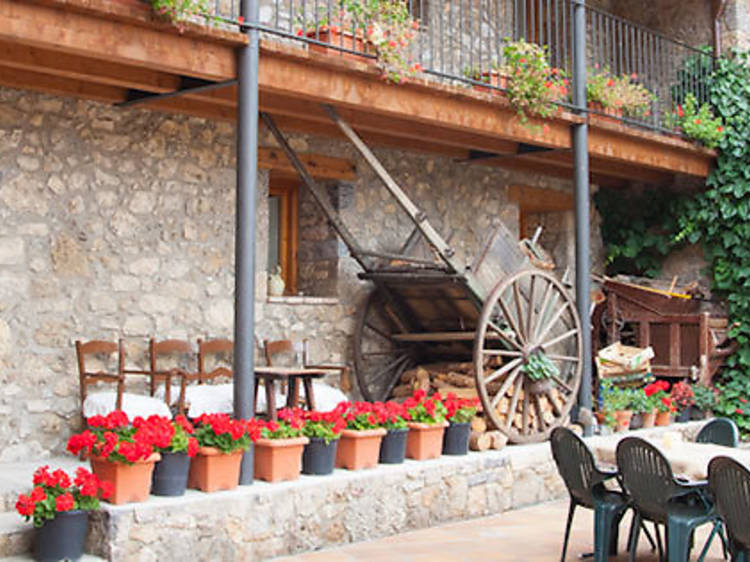 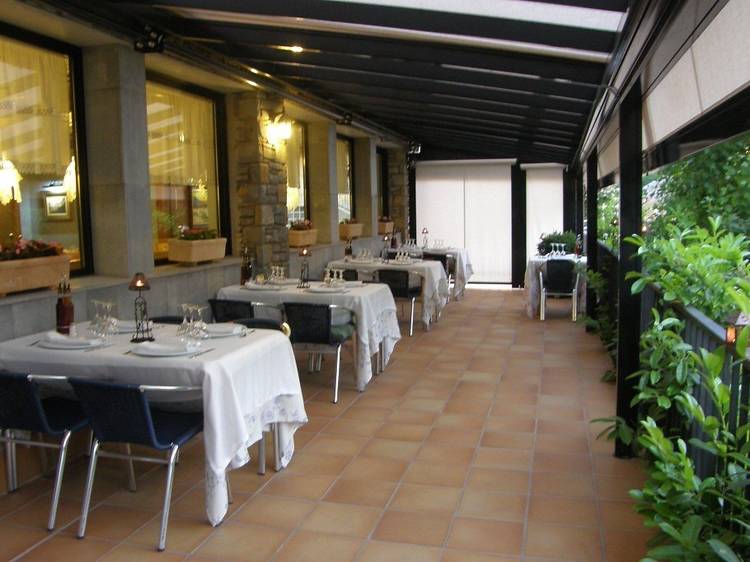 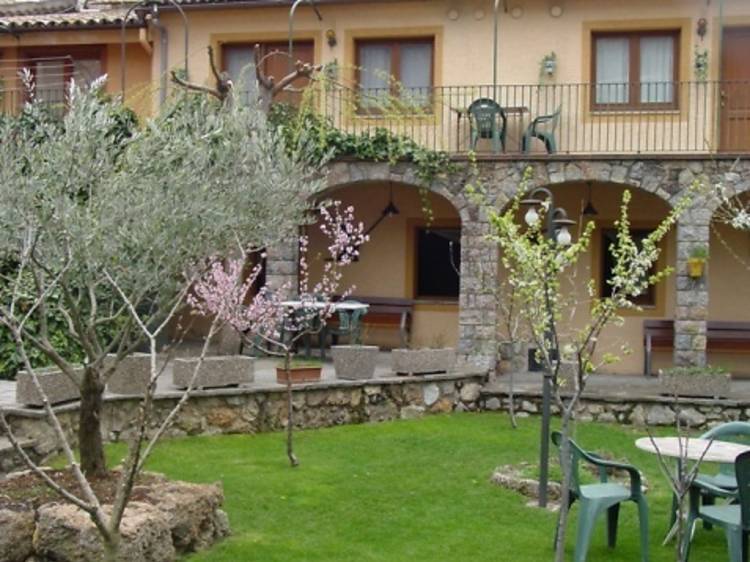 Rural tourism establishment offering the possibility of half board. Pleasant, family-style welcome and home cooking.
Half board from €45 per person.
C/ Coll, 7, Tuixent. Tel 973 37 00 34. www.calfarragetes.com. 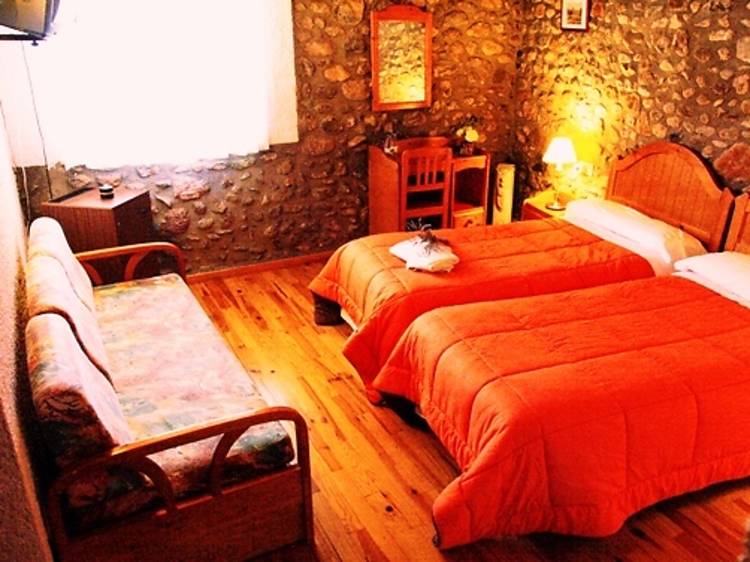 A dozen rooms and a good restaurant in this small hotel set in a reformed barn of an old Catalan masia in the peaceful village of Talló. Family-style welcome and bicycle hire.
From €75 a room for two people.
Camí de Talló, s/n, Talló. Tel 973 51 10 76. www.hotelcalrei.com. 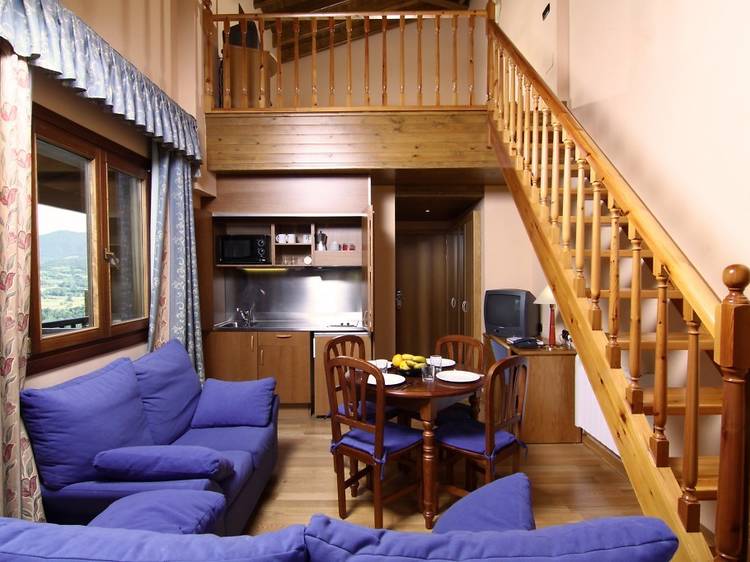 A modern and perfectly equipped hotel complex located in a peaceful village in the Cerdanya. Very well prepared for children. Spa and swimming pool. Each room has its own charm.
From €100 for two people including breakfast.
C/ Puig, 1, Prullans. Tel 973 51 02 60. www.prullans.net. 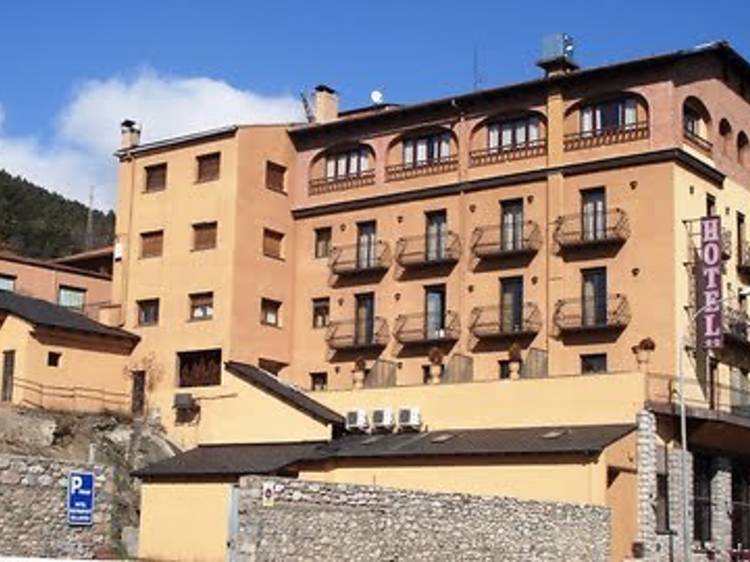 With 55 rooms and 90 years of history, Bellavista is a charismatic hotel located at the entrance of Bellver, offering views of the historical centre and is the ideal base for a car tour of the region. Its restaurant is open every day.
From €55 per person for half board.
Ctra. de Puigcerdà, 43, Bellver de Cerdanya. Tel 973 51 00 00. www.bellavistabellver.com. 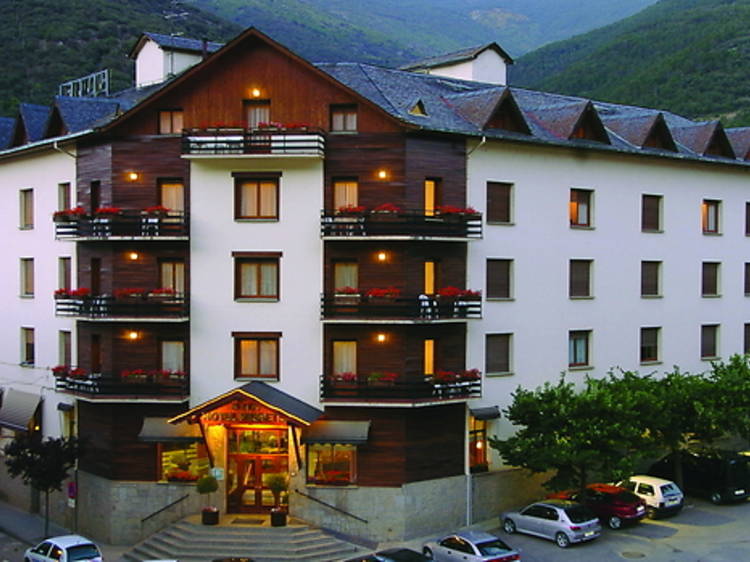 This hotel located near the centre of Sort is now 150 years old. Despite its age, is offers all the comforts you would expect, with some sixty rooms at different levels, a large garden an outside swimming pool and a spa.
From €100 for a double room including breakfast.
C/ Diputació, 3, Sort. Tel 973 62 00 00. www.hotelpessets.com.