Venture deep into a region with plenty to offer, from climbing a mountain with a castle at the top, to visiting a museum on paper production or another on leather, and even discovering the world of wine. Anoia is a region of contrasts, steeped in history. 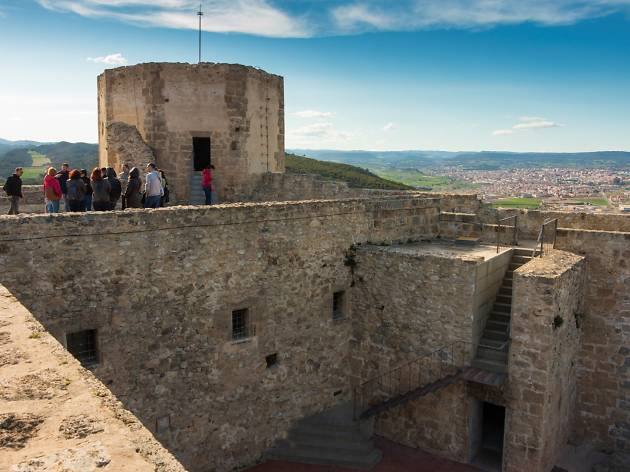 Anoia was once frontier land, and therefore a place where castles acquired strategic significance. Of all the ones still preserved today, we suggest you visit the castle in Claramunt, which is perhaps the most emblematic of the area. There are references to it that date back to the 10th century, and a thousand years later it was refurbished entirely, making this fortress the perfect place to discover what these magnificent constructions were like. Explore its defence towers, medieval walls, and the romanesque Santa Maria church. The castle dominates the point where the Anoia river gorge leads into the Òdena basin, a beautiful panoramic view that will make the walk up the peak – half an hour from the centre of the village La Pobla de Claramunt – totally worthwhile. 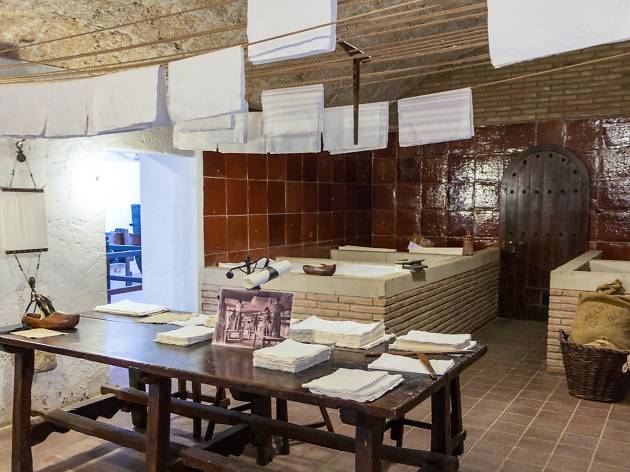 Spend the entire second day discovering Capellades, a town that offers so many interesting things, among which are the Museu Molí Paperer (Paper Museum) and the Prehistoric Park.

In the morning go and visit the 17th-century paper mill, which today holds one of the most extensive paper museums in Europe. The reason the museum exists is because between the 17th and 19th centuries Capellades and the surrounding area were an important centre of paper production, particularly foolscap and cigarette paper. The Capellades Paper Mill Museum houses tools, traditional paper-making machinery, book covers and sleeves, ink pads, paper and documents from the 12th century up to today. Added to the elegance of the building – all white, spread across four floors with plenty of windows, some of which were opened to help dry the paper – is the lake, a natural water source from which 12 million litres of water emerge every day, and which was once used to power 16 paper mills in the area.

If you eat in one of the local restaurants you should order a dish called 'arròs paperer' (paper rice), a recipe brought back a few years ago, which is closely associated with this paper-making land.

In the afternoon you'll go much farther back in time. Around 20 archaeological sites from different eras, from the Middle Palaeolithic Period up to the Middle Ages, have been discovered in the Capellades Prehistoric Park. Experts say that the most important one, scientifically speaking, and which you can visit today, is the Abric Romaní, which corresponds to the Palaeolithic Neanderthal. It was discovered in 1983, and the area is still being excavated today under the direction of the archaeologist Eudald Carbonell. The site is also surrounded by natural beauty, particularly the Cinglera del Capelló canyon. Guided tours are carried out all year; however, if you're a group of more than 15, you can book in advance. These last approximately 20 minutes and even include an archery workshop. 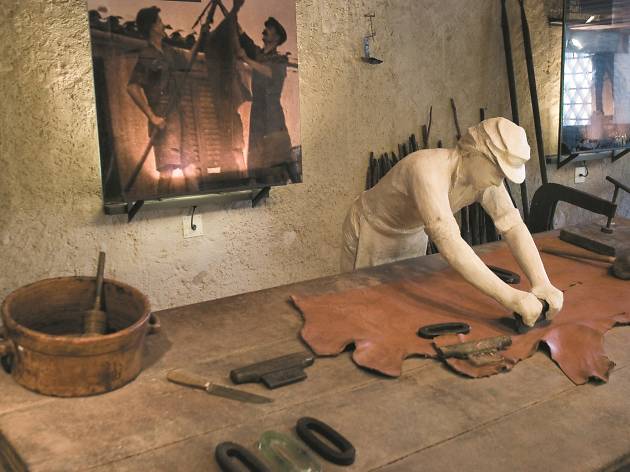 'Igualada' and 'leather' are two words that fit together perfectly in the same sentence. The capital of the Anoia region produces 70 percent of leather tanning in Spain. The industry dates back to the 14th century, so it was probably the best place to open a Leather Museum, which we recommend you visit in the morning. The Igualada and Anoia Leather Museum houses the old tannery Cal Granotes from the 18th century, a place where you can learn how the people of Igualada transformed hide into leather, a process that took a year. The central building is the old 19th-century cotton textile factory Cal Boyer, where you can follow four different tours on leather and water use.

To wrap up your trip, let's move onto a completely different subject. Wine production in Anoia is perhaps not as well known as in neighbouring regions, but the truth is that wine making is the third most important type of agriculture in Anoia, after wheat and barley. Today, there are some 20 wineries that you can visit in Vall d'Anoia, Piera, Masquefa, Hostalets de Pierola, La Llacuna, Òdena and El Bruc. If you enjoy the world of wine, make a reservation in advance at one of the wineries and truly savour the end of your trip to Anoia. 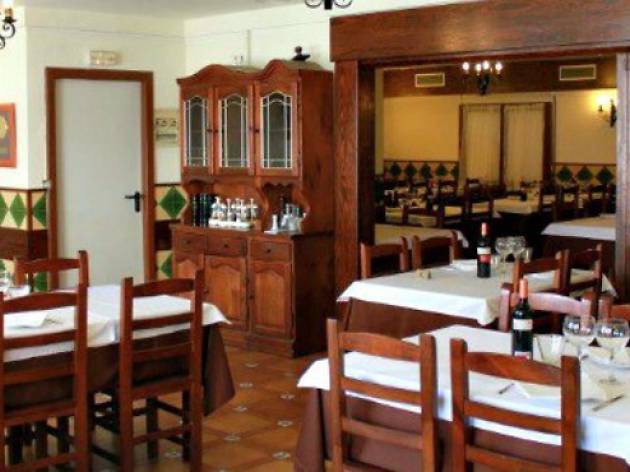 If you’re interested in eating at a typical Spanish roast house, El Abuelo in Igualada is the place for you. The quality of their wood fire–grilled dishes and the raw materials that go into them has won them plenty of accolades, and the restaurant is also well known for its extensive variety of 'tortillas' (omelettes) – more than 40 types. Meat lovers will especially appreciate the roasted suckling pig, though its long cooking time means that it must be ordered in advance. 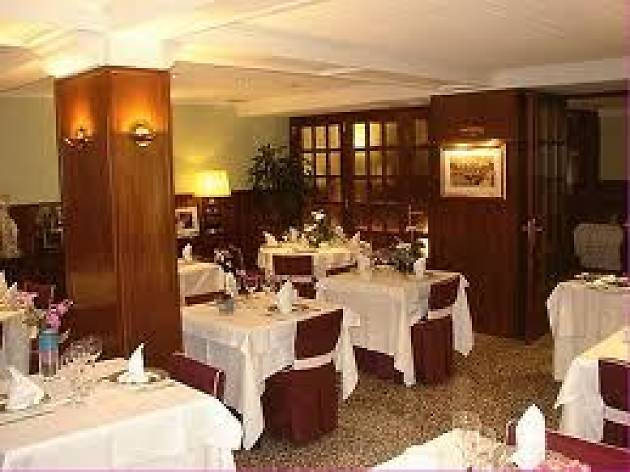 As its name suggests ('conill' means rabbit) this place serves excellent rabbit dishes, but that’s not all, and even seafood dishes have their place on the menu here, including cuttlefish meatballs with and prawns with cuttlefish ink. However, the dishes that have won awards are the cannelloni, pigs’ trotters with prunes and pine kernels, and the shoulder of rabbit. More than 100 years of history endorse the good work of this well-known restaurant in Capellades. 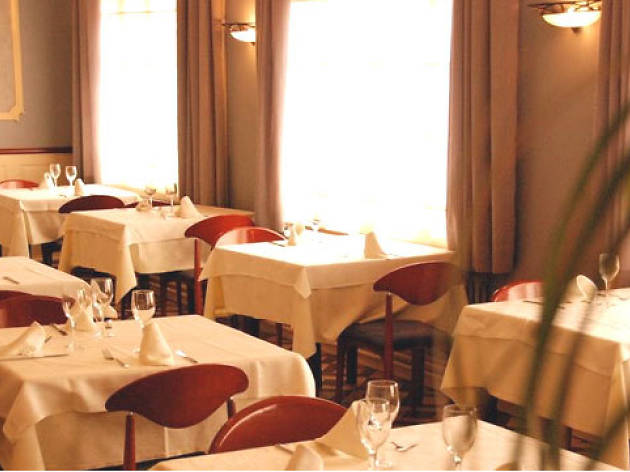 The restaurant at Hotel Robert is located at the foot of the mountain top village of La Pobla de Claramunt, which is crowned by a magnificent castle. It makes for a great outing so better fill up first with this restaurant’s exquisite stuffed onions or equally excellent duck with turnips. Top quality Catalan cuisine. 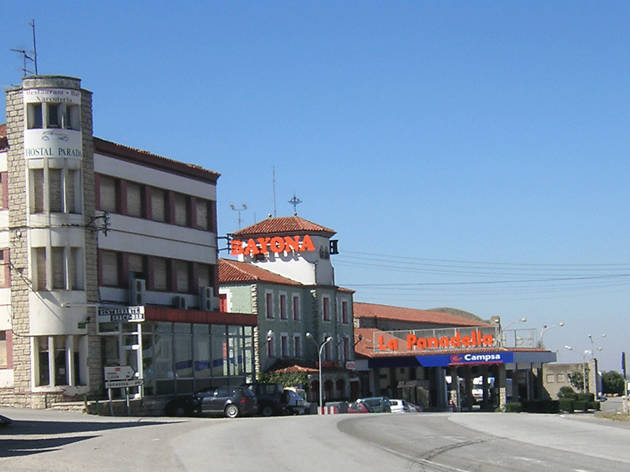 Following the completion of the building work on the dual carriageway between Barcelona and Lleida, this restaurant has lost the privilege of lying practically equidistant between the two cities and therefore being an almost obligatory port of call for drivers looking for breakfast, lunch or dinner. But it’s still worth coming here for its traditional and more daring dishes that are inspired by Mediterranean cuisine. Rooms are also available. 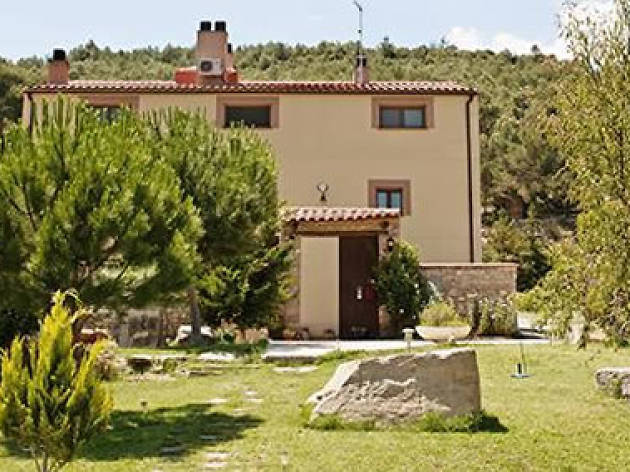 This farmhouse for rural tourism takes its name from the stream that runs alongside it. You'll find many more natural attractions around the house, such as a lush forest filled with white pine trees and different species of oak trees. The house itself is divided into three lodging areas (designated as air, land and fire), which share some common spaces, such as the swimming pool, spa, patio and sports areas. 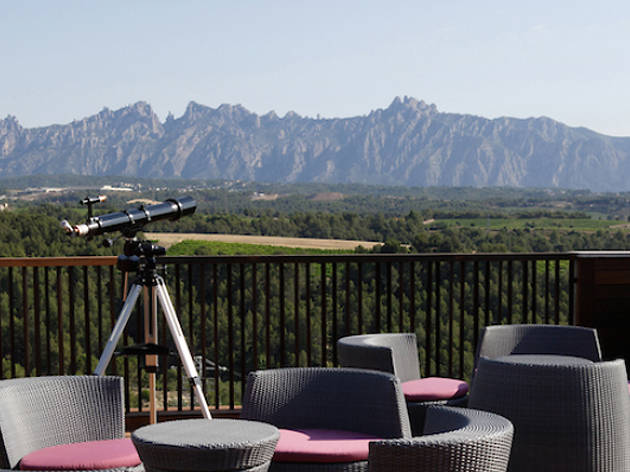 The hotel managers describe it as 'a bit of paradise among the vineyards'. And we have to agree. The hotel is inside a 16th-century farmhouse surrounded by the region's most popular plant, as well as woods, and it offers spectacular views from any of its dozen rooms. Also notable is its spa, and the good-quality Tribia restaurant, as well as the cellar where they make their wines. 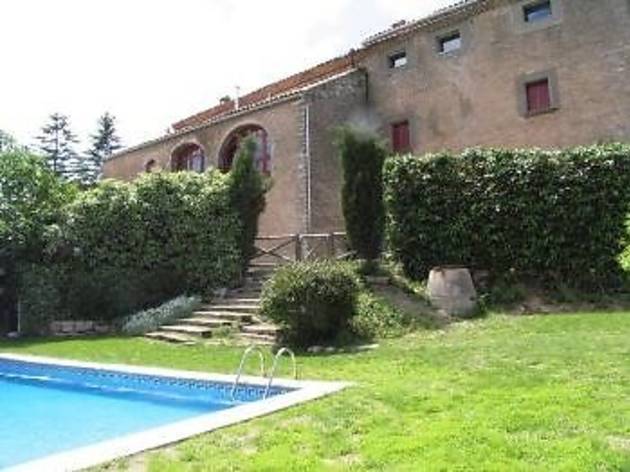 This 17th-century farmhouse has been remodelled to provide rural accommodations and sleeps around 15 guests – they rent the whole place out rather than splitting up the house. A couple of their most attractive features are the surroundings and the panoramic views you can see from the house. Outside you'll find a swimming pool, garden and barbecue, while inside you have all you need for a lovely stay. 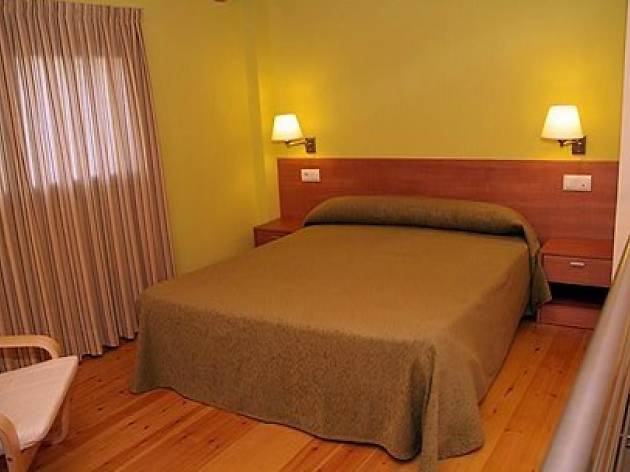 Located in the town of Calaf, this two-star hotel is ideal for anyone in the area for business or pleasure. Each of the ten rooms is different, well-decorated and fully equipped. You'll be treated very well by the staff in this hotel that, while simple, makes you feel at home. 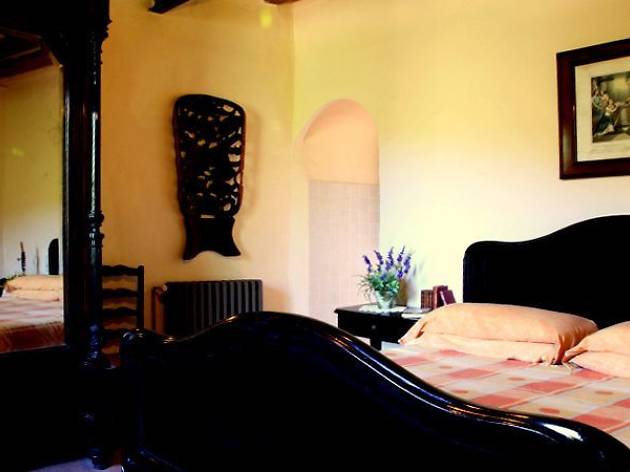 In this isolated spot with a romantic air about it you can rest up and enjoy the tranquil surrounds, if that's what you're looking for. They don't rent out the whole house, but instead rent out individiual rooms – all spacious and with private bath. You can choose half board if you want, and they also cook dinners by special order. We recommend that you have dinner there at least, partly because, as mentioned above, it's a bit far away from anything else, and also because they serve up some delectable home-made dishes. 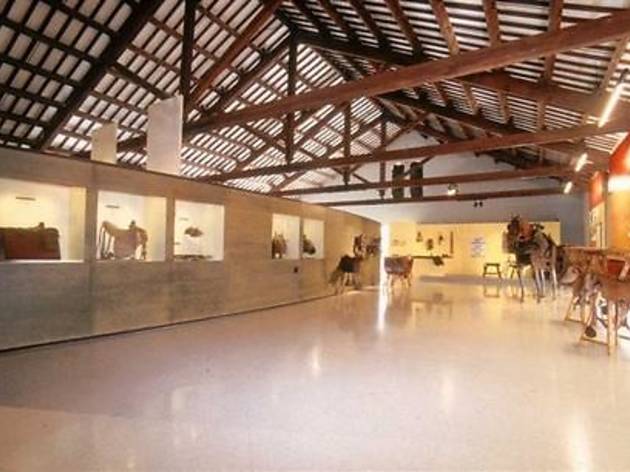 Tracing its origins back to 1949 and located in the industrial heritage Rec neighbourhood, the Igualada leather museum was first opened in the 1990s in the old 19th-century Cal Boyer cotton factory. It offers four circuits: 'Man and water', 'From the pit to the pumps', 'Leather in history' and 'The world of leather'. The other centre is set in the old 18th-century Cal Granotes tannery, where you can learn everything about the tanning process in the preindustrial era. 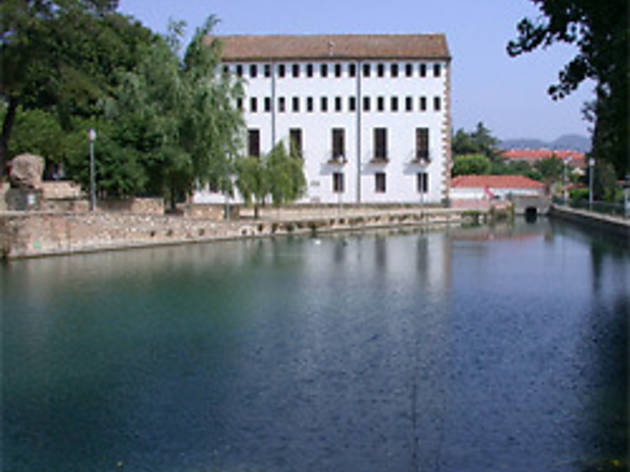 A popular destination for school trips and attracting more than 30,000 people every year, the Capellades Paper Mill Museum is also worth visiting for adults. Inaugurated in 1961 in one of the town’s seventh-century mills, the museum has a collection illustrating seven centuries of paper production and culture through visits and workshops. The mill still generates half of its income from the sale of paper made using traditional techniques. 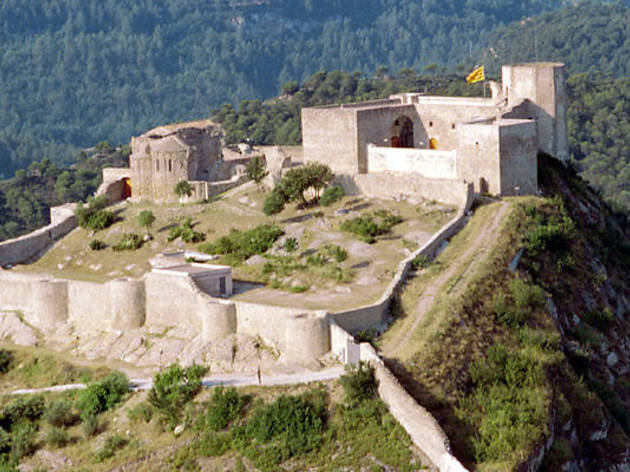 Rather than amenities, castles are monuments, and this is one of 13 castles run by the History Museum of Catalonia. With more than 1,000 years of history, Claramunt Castle is one of the icons of the region, one of the most spectacular forts in the country and the main attraction of the region’s Border Castle Trail. Access is on foot, but the 25-minute walk to the top of the hill will be well-rewarded. The trail also includes the castles of Òdena, Tossa, Miralles and Vilademàger.