48 hours on the Costa Brava

Landscapes that have inspired geniuses behind the pen and the paintbrush

It is the rugged coastline dotted with fishing villages, but also the soft sandy beaches of the Gulf of Roses. It is the north wind and madness of Dali, the words of Pla, and the transparent waters of the coves. It is the magical background of the Medes Islands and the medieval peaks of Montgri and Sant Pere de Rodes. In short, it is the Costa Brava, a pleasure for the senses.

Since we are travelling the Costa Brava from south to north, so our first port pof call is Blanes. It is well worth a visit. After walking around the streets, a visit to the Marimurtra botanical gardens is absolutely recommendable. Inaugurated 90 years ago, with more than 5,000 species of trees, plants and flowers from all around the world and offering beautiful sea views, the gardens have been declared a site of cultural interest by the Government of Catalunya.

And since we are in the country of La Selva, we will make a detour to the capital, Santa Coloma de Farners, located a few kilometres inland. We will stay in touch with water though, and in a very healthy way, at the Magma Thermal Leisure Centre. Even if it is getting late, there is no problem since the area is open until 10pm in the week and until 11pm at weekends (closed Tuesdays). Here you will find swimming pools, hydro-massage tables, Roman baths with chromotherapy, Turkish baths, Swedish style saunas... You will leave feeling like new!

This morning we are going to visit two museums. But do not panic! They are two very different museums offering a lot of fun where old and young alike will have a good time. At Santa Cristina d'Aro, we will find the Museu de la Il·lusió i la Curiositat, also known as the House of Magic, that has on display a collection of artefacts from different eras associated with the world of illusionism including posters, automatons and tarot cards, all collected by Xevi, the magician behind the museum, which is located in a beautiful house dating from the mid 19th century.

A little to the north, returning once again to the coast, in Palamós, we will visit the Museu de la Pesca, a fishing museum set in a large ship in the middle of the port. The museum's permanent exhibition shows the biological diversity of Mare Nostrum and the evolution of different fishing methods, from the most ancient to the most sophisticated. The Espai Peix (Fish Space), where cooking classes are given and where they explain all about the fish auctions and the types of vessels used to catch the fish, are also part of the museum and will round off an interesting visit.

Perhaps it is now time to actually put to sea. We will observe an exceptional stretch of sea bed but without getting wet. To do so, we will head for l'Estartit and take a ride on one of the vessels especially equipped to allow us to experience this adventure. There are plenty to choose from, offering different itineraries and prices. We will see for ourselves the ecological and biological value of these isles and the magnificent variety of marine life they shelter, both below the water and on the rocky outcrops of the Medes themselves.

And since the Empordà is where the sea and the mountains meet, and August days are still long, we would like to invite you to finish the day climbing up to the castle of Montgrí. It has been visible for some time now, crowning a rounded mountain top. To get there, head for Torroella de Montgrí and follow the signs indicating the route. Halfway up you will find a cross from which you can see the hermitage of Santa Caterina. We will not go there today, because we have to press on towards the castle, which was built on the orders of Jaume II. From the castle's towers we will enjoy magnificent views of both Baix and Alt Empordà. After taking some photos and being enthralled by the views, we can make our way back to the town along the Cau del Duc trail, named for a cave in which remains from the lower Palaeolithic era have been found. A scree slope, known as Pedrigolet, which is fun but on which we have to take care not to slip, leads us back to the plain. Now it is time for a well earned rest. We are now in Figueres, the capital of the Alt Empordà. We're here for an original but recommended activity known as The cathedral of water, that consists of a commented tour of the moat of Sant Ferran fortress aboard an all terrain vehicle. It is quite an experience, since there is also one part that is done on an inflatable boat, and in total it takes two hours to explore this military construction dating from the 18th century.

Figueres is also home to the Teatre-Museu Salvador Dalí. Contemplating the work of Catalonia’s most iconic surrealist is a unique experience for all five senses. From paintings and engravings to photography, sculpture and holograms, here you’ll find Dalí’s imaginative universe in all its splendour.

If you still have some time on your hands on this last morning on the Costa Brava, change location and take the road to Llançà, to visit the Museu de l'Aquarel·la. This watercolour museum contains some 200 artworks, half of which were donated by the artist J. Martínez Lozano. As well as the permanent exhibition, this August you can see the temporary exhibition Aquarel·les del paisatge sensible, by Ramon Reig.

Since we are so close, we really cannot miss this opportunity to see one of the finest examples of Catalan Romanesque architecture, the Monastery of Sant Pere de Rodes. Here, it is not only the architecture, dominated by the Lombard Romanesque style of the 11th century, but also the location and the landscape, which leaves visitors so impressed. Located in the Verdara range, the site offers views over the Gulf of Lion and Port de la Selva. This Benedictine monastery is also a key location on the Catalan stretch of the Way of Saint James. Guided visits are available upon request.

We would like to suggest that we spend our last few hours on the Costa Brava not in a museum or a monastery, but rather immersing ourselves in the natural beauty of Cap de Creus, exploring its rocky outcrops carved over millennia by the action of wind and sea. This unique, moon-like landscape is the most easterly point of the Iberian Peninsula.

By train: There is a Renfe station at Blanes on line R1, while the Barcelona-Portbou line has stations at Camallera, Sant Miquel de Fluvià, Vilamalla, Figueres, Vilajuïga, Llançà, Colera and Portbou. The high-speed train currently reaches Figueres Vilafant station from Barcelona (902 24 02 02) (www.renfe.es).
By bus: Both Sarfa (902 30 25 25) (www.sarfa.com) and Teisa offer bus services to a number of towns on the Costa Brava.
By car: The AP-7 motorway, which runs by Figueres, and the N-II are the most common approach routes to the Costa Brava. 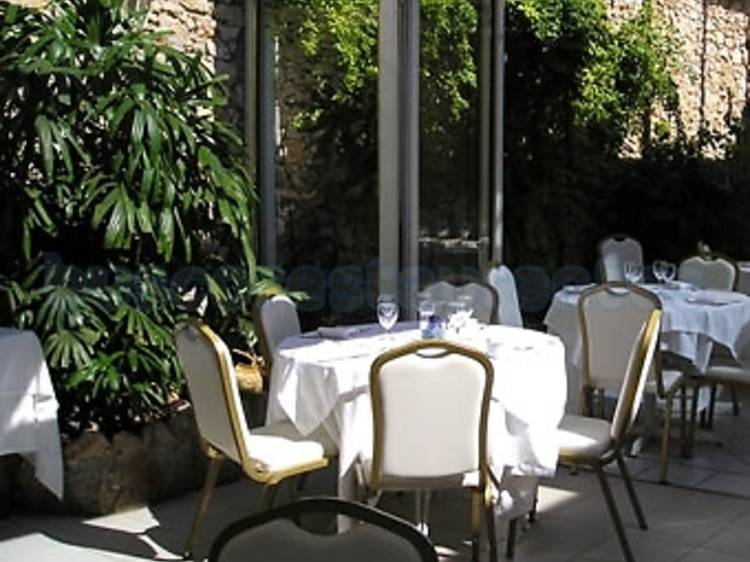 Known as La Truiteria, because in the 1980s they only served omelettes here, it currently offers traditional cuisine with modern touches. Rather than a standard menu there is a fixed price menu that is changed daily.
Sant Llàtzer, 16, Figueres. Tel 972 50 37 65. www.loudor.com
Fixed price lunch menu: €12.20 + VAT. Friday evening and Saturday fixed price menu: €15.20 + VAT. 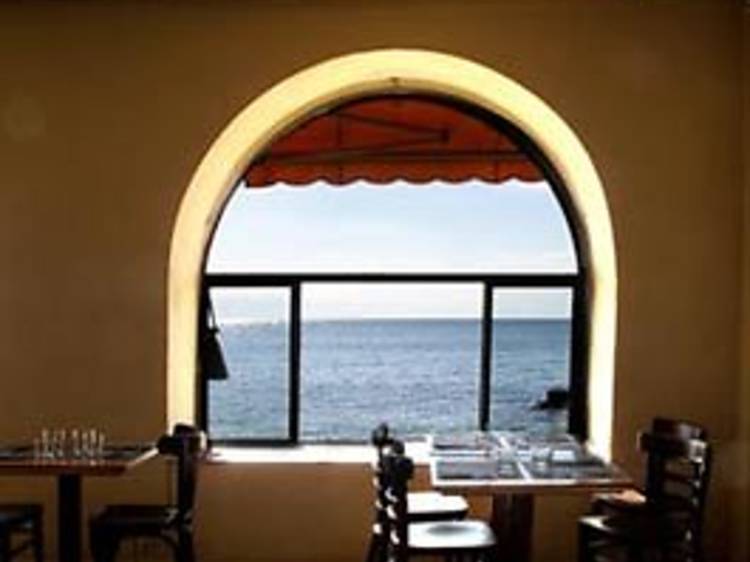 Choose between a terrace next to the sea and an interior space that is equally charming, but whether you dine inside or out, Tragamar will serve you today’s catch, steaming rice dishes and Bhutan potatoes. Platja de Canadell, s/n, Calella de Palafrugell. Tel 972 61 43 36. www.tragamar.com.
A la carte: €40. 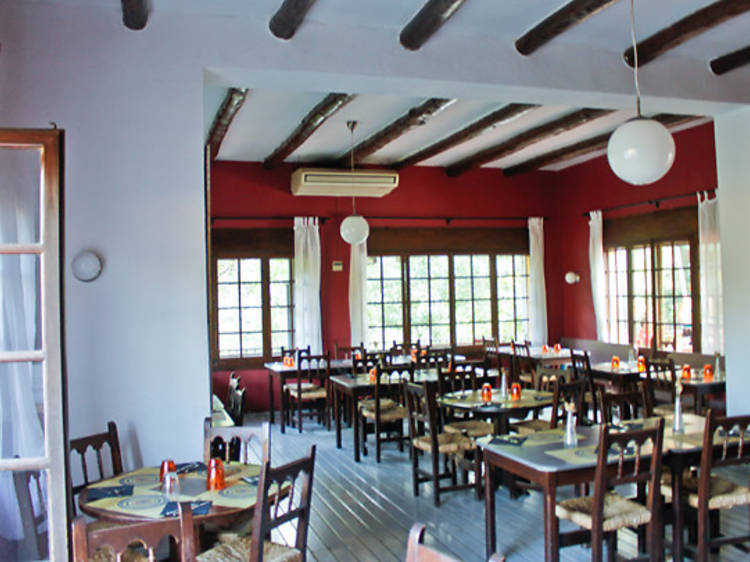 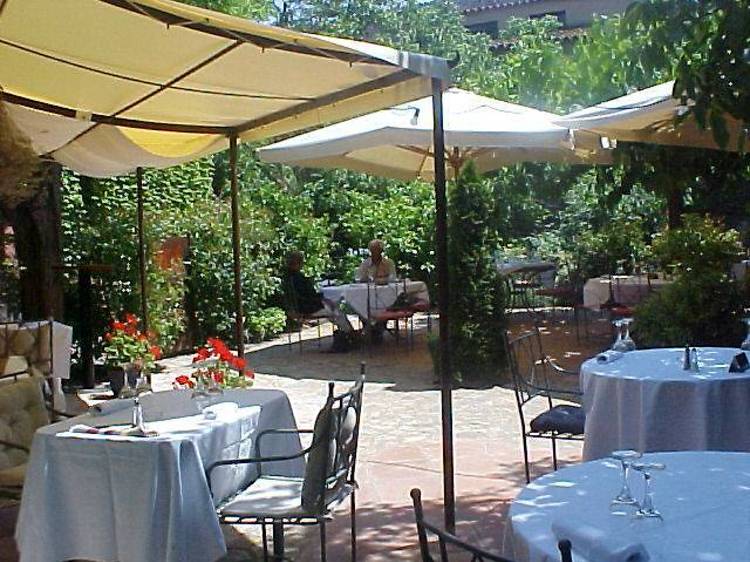 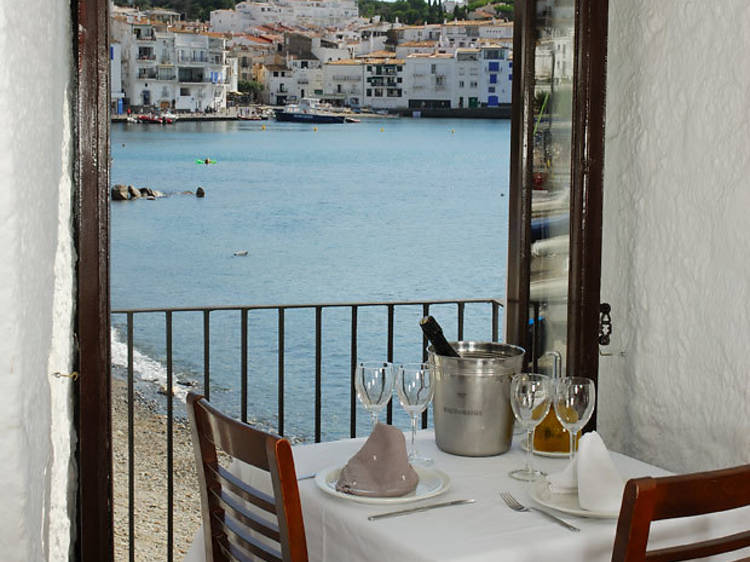 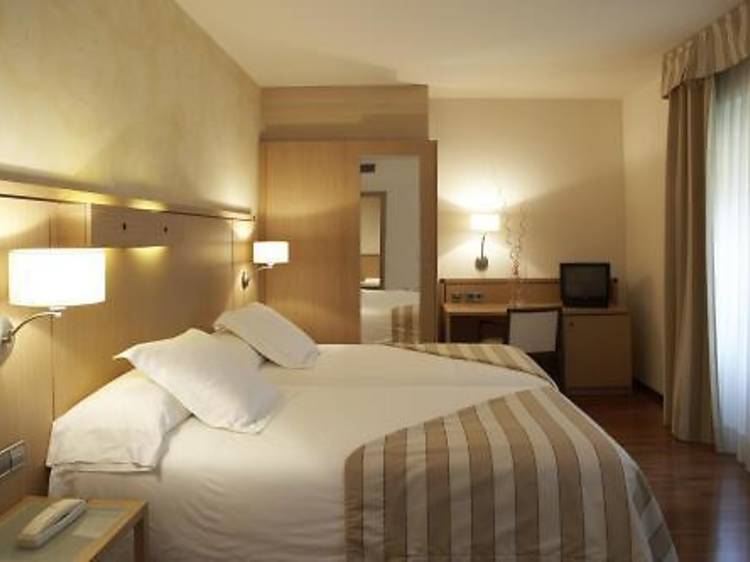 In the heart of the Alt Empordà, close to the Dalí Museum and the Rambla. 65 recently refurbished rooms and a good restaurant.
Lasauca, 5, Figueres. T 972 50 12 50. W www.hotelduran.com.
Prices from €80 for a double room with breakfast. 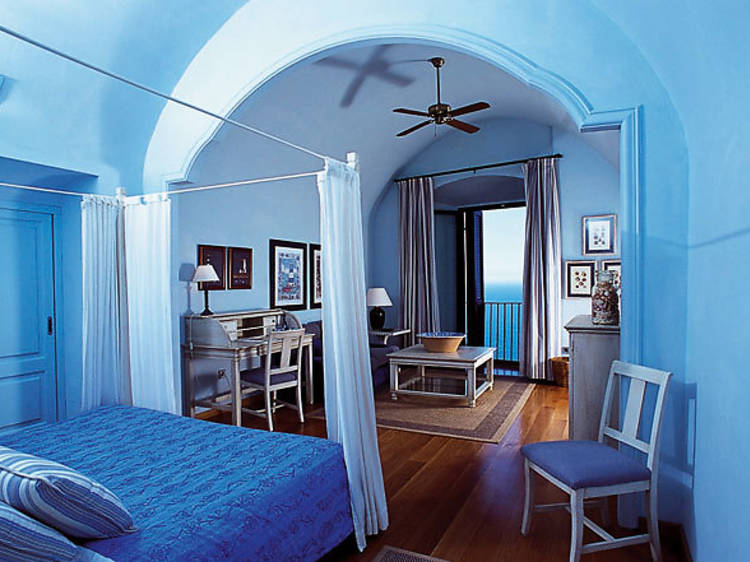 A small hotel with nine bedrooms with terrace in an 18th century inn near to the Sant Sebastià lighthouse. A singular and charming establishment, surrounded by coves. Its restaurant offers local cuisine.
Muntanya de Sant Sebastià, Llafranc, Palafrugell. Tel 972 30 16 39. www.elfar.net.
Prices from €235 for a double room with breakfast. 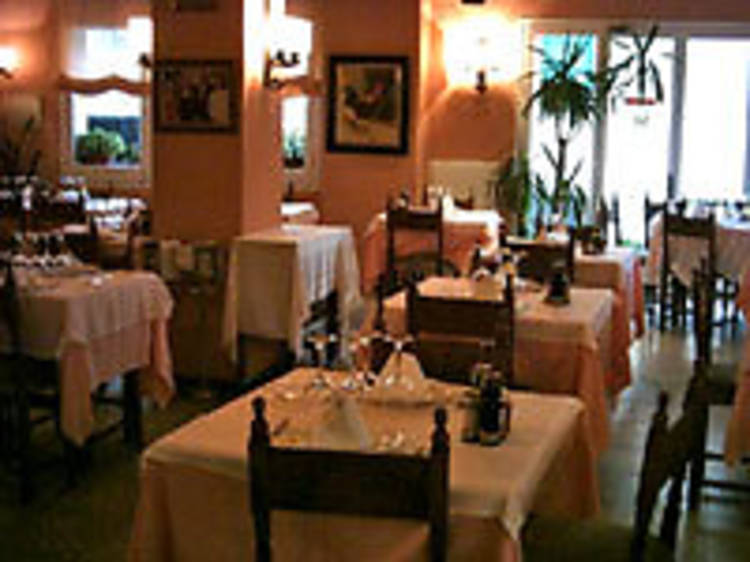 A simple, family-style establishment located in the old quarter of L’Escala, very near the beach. Restaurant serving market and local cuisine.
Església, 7, L’Escala. Tel 972 77 11 02. www.elroserhostal.com.
Half board from €55 per person. 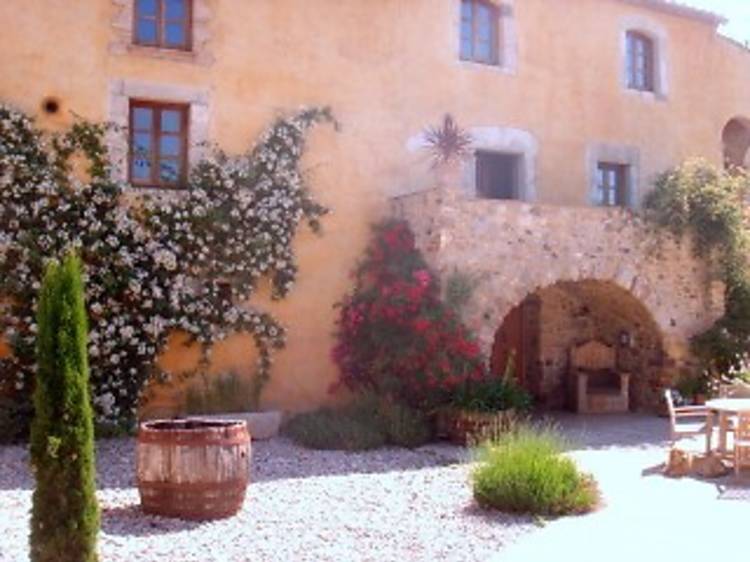 A completely refurbished Catalan masia dating from 1768 offering peace and tranquillity in any of its eight rooms. A little jewel of a place.
Veïnat de les Olives, Peralada. Tel 972 53 86 23. www.hotelcancarbo.com.
From €135 for a double room with breakfast. 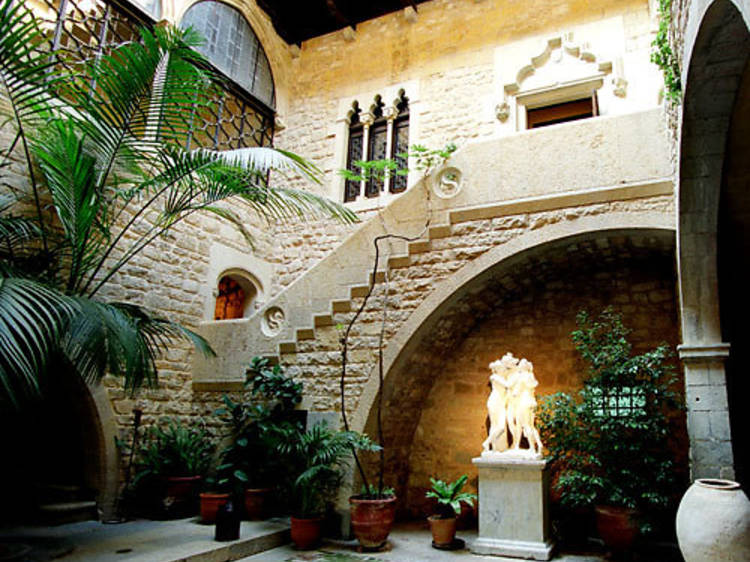