Berlin and its surroundings play host to a mind-boggling number of abandoned buildings – old military camps, former factories and enterprises, hospitals, swimming pools, colleges, sanatoriums, airfields and more. The city’s turbulent past has taken its toll through various waves of upheaval, with the Third Reich, the Cold War, the fall of the Berlin Wall and German reunification all leaving their mark.

Every crumbling building, creaking floorboard, fluttering curtain and flaking piece of paint in abandoned buildings across Berlin – and some outside the city too – has a tale begging to be told. 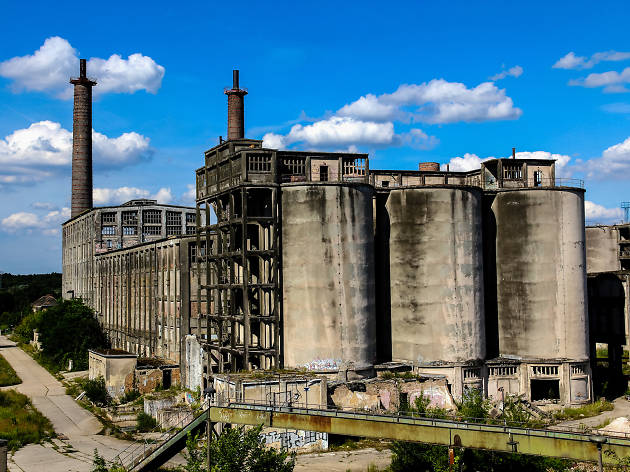 This colossus started life in 1899 as a cement factory, before it was taken over and used to produce bauxite vital for the Nazi war efforts. The Soviets took over after the war and the factory found a new lease of life making animal feed phosphates and agrochemicals in the German Democratic Republic. German reunification meant the end, however, as it did for many East German enterprises, and it was finally closed down in 1999.

Lately, the former Chemiewerk has been used for filming music videos (Rammstein), and scenes for films including ‘Enemy at the Gates’ and ‘The Monuments Men’, while the ‘Homeland’ series was trolled by artists asked to produce Arabic graffiti when they wrote ‘“Homeland” is racist’ on walls supposed to be depicting a Syrian refugee camp. 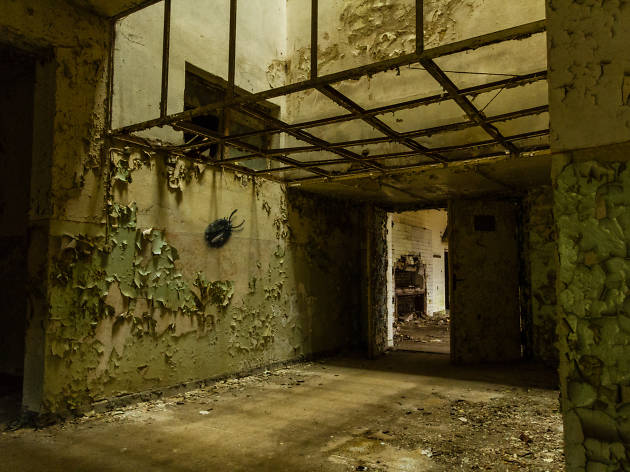 Concentration camp prisoners from the nearby Sachsenhausen camp were forced to bake bread for their fellow inmates, as well as prisoners in other camps. The Nazis ordered the prisoners to build the bakery, too, which didn’t open until 1941 due to a lack of raw materials.

The prisoners started off baking 10,000 loaves a day but production was ramped up after shift-work was introduced, working hours extended and two new ovens installed to produce around 40,000 loaves a day, ensuring they could also supply the Mittelbau-Dora, Groß Rosen and Ravensbrück concentration camps as well. The Soviets took over after the war, keeping the bakery going to feed starved survivors from the liberated camp. Later it was run as a normal bakery. 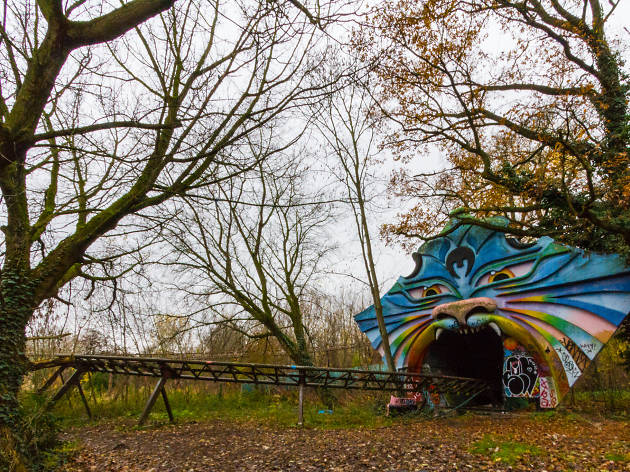 Spreepark has become one of Berlin’s chief attractions, though the authorities aren’t exactly happy about it, with signs in several languages on the fence surrounding it warning curious visitors to keep out.

When it opened as VEB Kulturpark Plänterwald for East Germany’s twentieth birthday on October 4 1969, it proved a hit, with around 1.7 million people visiting every year at its peak. After German reunification, it was sold to the Witte family, who invested a lot of money but failed to get the return. Spreepark, as it was then called, went bust in 2001.

It was recently bought back by the city of Berlin and there are plans to reopen it as a watered-down version of what it once was. Those plans may or may not come to fruition – see the never-ending saga of Berlin’s new airport – but in the meantime it stands as a relic of fun in times past. For those wary of sneaking under the fence, there’s talk of tours recommencing in the spring. 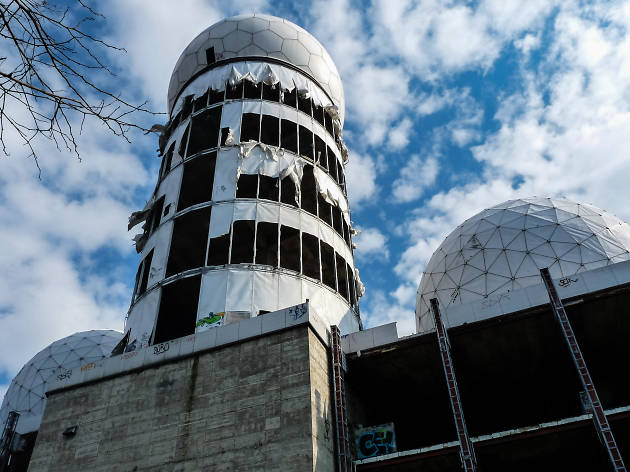 A manmade hill of war rubble more than 100 metres high, Teufelsberg was the highest point in what was West Berlin. So it was seen by the Americans and British as the ideal place to set up a listening station to hear what the Soviets were up to on the other side of the Cold War divide.

Field Station Berlin was located in the British sector of the divided city, but primarily operated by the United States’ National Security Agency. The NSA used 12-metre satellite antennas and the most sophisticated spying equipment available at the time, intercepting satellite signals, radio waves, microwave links and other transmissions, before interpreting and analysing their findings.

‘This is all sort of difficult to discuss, since we are still bound by oaths of the time. While the NSA admits it had a presence in Berlin, details are still cloaked,’ Field Station Berlin veteran Lew McDaniel told Abandoned Berlin. Visits to the ruined facility are possible for a small fee. 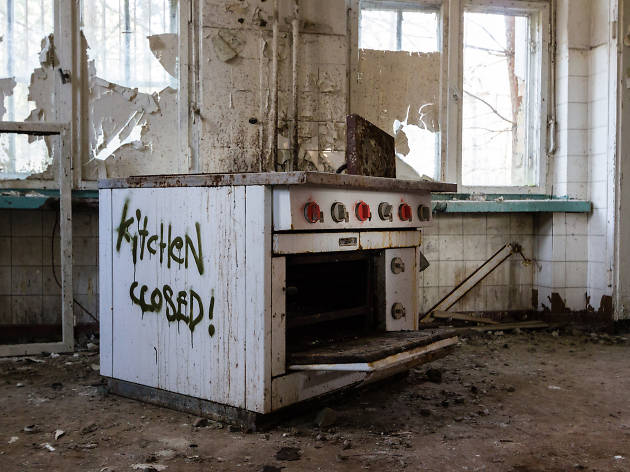 Berlin is surrounded by abandoned airfields and airports. One of them – Tempelhof – is now loved by all as a giant city park, while others just rot amid indifference. Flugplatz Sperenberg was used most recently as a Russian military airfield, but it fell into disuse when they left the former GDR in 1994. It had been mooted as a possible site for the new Berlin airport that’s now way over-budget and so late that few Berliners believe it will ever open at all. If only they’d used Sperenberg…

Sperenberg began as a Prussian military facility and was taken over by the Soviets after the WWII. They turned it into their main military airport for both passengers and cargo. It lost its purpose when they left. 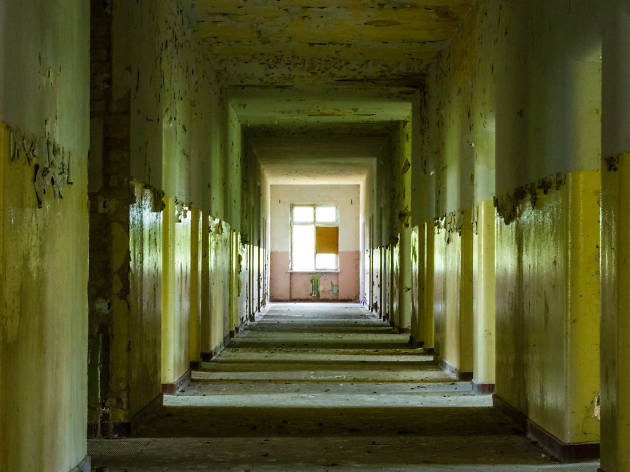 Jüterbog was once part of the biggest build-up of German military might before it all came crashing down and the Soviets took over.

It started when the Prussian army bought 250 acres for shooting and manoeuvres around 1860 in Jüterbog, but the area’s military importance increased rapidly after that with the proclamation of the German Empire on January 18 1871. By 1934, Jüterbog’s military areas comprised the biggest troop-training centre in Germany, and it continued expanding. Once the Soviets took over after the war, they made it into one of their most important military bases in East Germany. They left in 1994. 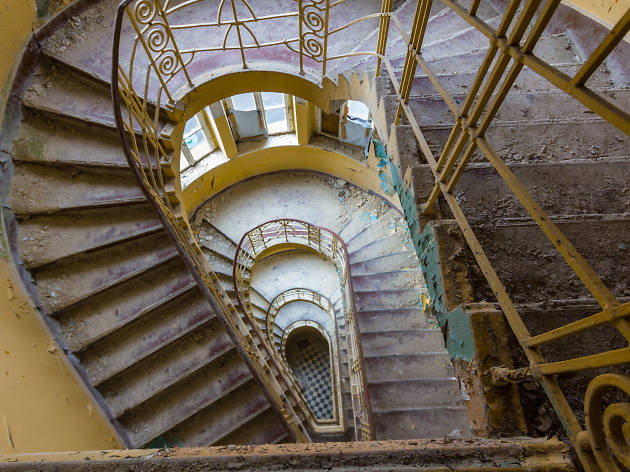 The Hohenlychen sanatoriums are beautiful, but their beauty hides a disturbing history that would cause anyone to have second thoughts about visiting. It started with a sanatorium for kids with tuberculosis in 1902 and was followed with other sanatoriums for other ailments, before they were used as military hospitals in the First World War. German athletes were treated here ahead of the Berlin Olympics in 1936.

Karl Gebhardt, a friend of Heinrich Himmler, became chief physician in 1933 and he went on to conduct horrific experiments on inmates from the nearby Ravensbrück women’s concentration camp. Gebhardt was later convicted of war crimes and crimes against humanity at the ‘Nuremberg Doctors’ Trial’. He was executed for his cruelty. The Russians took over after the war, staying nearly 50 years. 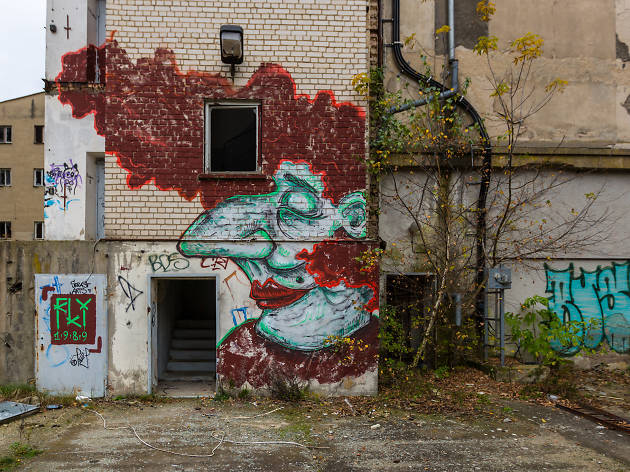 This animal food factory closed in 1992 despite big investment to bring it up to standard. It was another casualty of German reunification. Many former East German businesses couldn’t survive without the state-run system. The factory started as a grain mill beside the river in 1720. It became one of northern Germany’s biggest, producing 800 sacks of wheat and 400 sacks of rye a day in the 1940s.

After the war it was taken over by the East German regime, which decided it should become an animal-feed factory. The animals were well-fed until the Berlin Wall’s demise spelled the end. 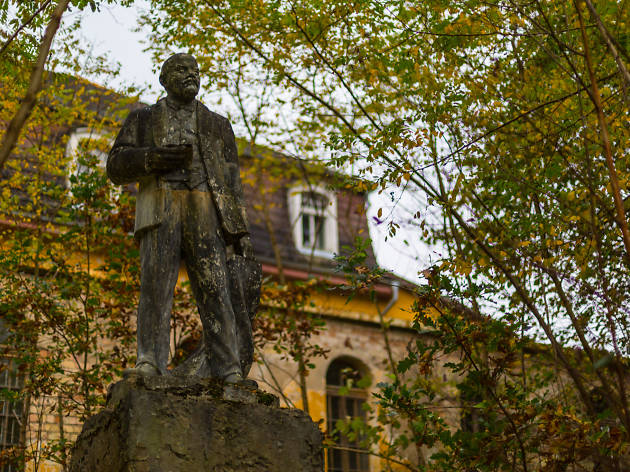 Lenin still stands outside the officers’ villa in Fürstenberg, where some 25,000 Red Army soldiers were based, including the Soviet 2nd Guards Tank Army. The 24 houses that once housed SS guards on the shores of the Röblinsee were later used by Russian officers – only the best would do. Now the villa is crumbling and in a sorry state. Lenin is the only one who still maintains a sense of decorum.

Inside, newspapers on the walls tell tales from yesteryear, such as that of Ivan and Lyudmila – the former a beet worker, the latter the winner of the socialist milkmaid competition in the Kursky region. Their achievements live on in a dark hallway that no one visits. 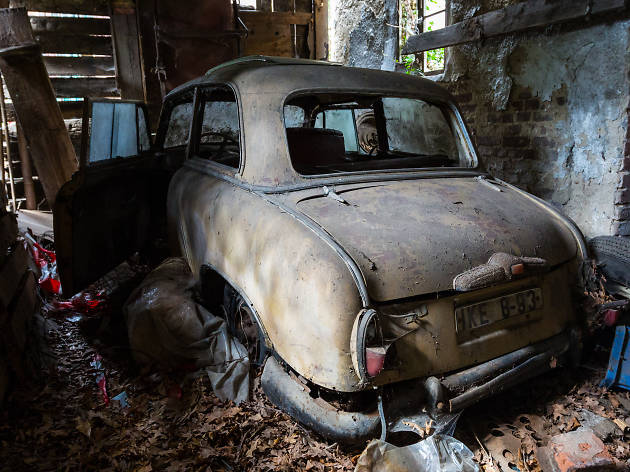 You never know what’s behind abandoned walls. An old derelict house in the north of Berlin is home to some lost treasures in a forgotten garage out the back. Covered in dust and debris, the ‘Trabiwerkstatt’ still houses some of its patients – old Soviet-built Moskvitch 412s in various stages of decay, and a forerunner of the famous Trabant that became ubiquitous in East Germany. It’s a pre-1959 AWZ P70 Zwickau or Sachsenring P70 and it has clearly been a long time since anyone lavished any attention on it.

Who knows what happened? Perhaps the owner simply left it all behind and decided to start afresh on the other side once the Berlin Wall came down. Maybe they simply collected old models and died with no next-of-kin to take over. 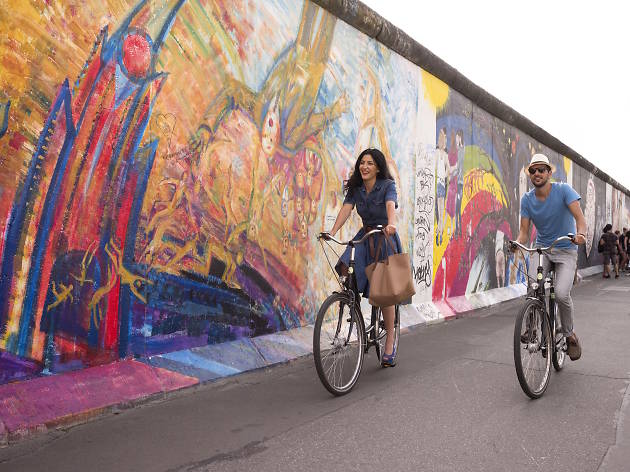