Found only along the coast from southern Oregon to central California, Sequoia sempervirens, or coast redwoods, don’t run short on superlatives. They’re the tallest living things in the world—rivaling 30-story skyscrapers—and they’re one of the earth’s oldest living organisms, with many trees dating back to the Roman Empire. Yet, today’s old-growth redwoods comprise just five percent of the original stands that were nearly completely lost to logging. Thankfully, you’ll still find numerous places to visit in California where you can marvel at these magnificent trees (and even camp among them!), and explore their enchanting ecosystems of lush ferns, gurgling streams, and vivid yellow banana slugs. Listed in geographic order from north to south, here are 13 places to experience California redwoods—you won't be surprised that many of them are California State Parks. 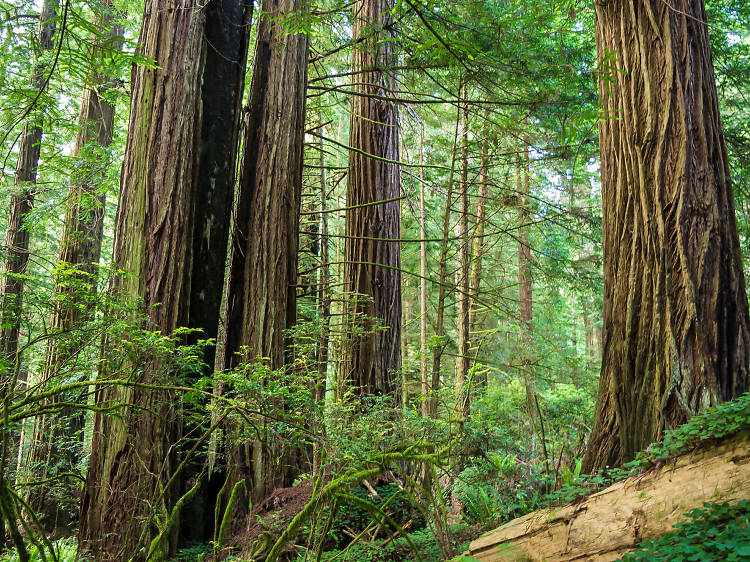 What is it? Likely the most stunning old-growth redwood forest in California.

Why go? With roughly seven percent of the old-growth redwoods in the world, this densely forested preserve hides one of the least disturbed redwood forests in the state. The majority of the park is left in its primeval state—a handful of roads and trails cover just a fraction of its expanse—yet don’t miss the .6-mile loop trail through Stout Grove, a serene, awe-inspiring patch of immense redwoods rising above a lush carpet of ferns. Getting there via the scenic Howland Hill Road is half the fun. 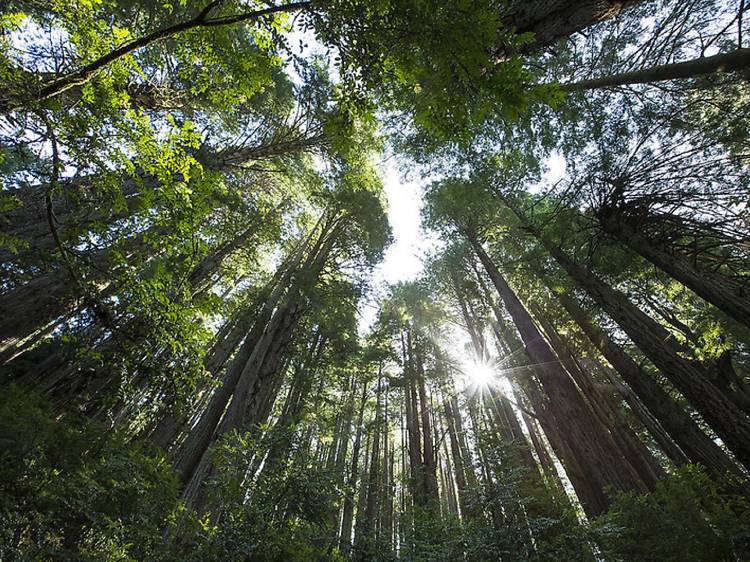 What is it? A vintage roadside attraction that delights with redwood groves and kitsch.

Why go? Here, you’ll find the quintessential redwood groves that Del Norte County is known for, but what’s likely to first catch your eye is a colorful, 49-foot Paul Bunyan standing alongside his trusty blue ox, Babe. The postcard-perfect pair greet visitors—Paul winks and talks!—at this 1946 roadside stop that also features a redwood trail and a thrilling, gondola-style ride above a redwood canopy. 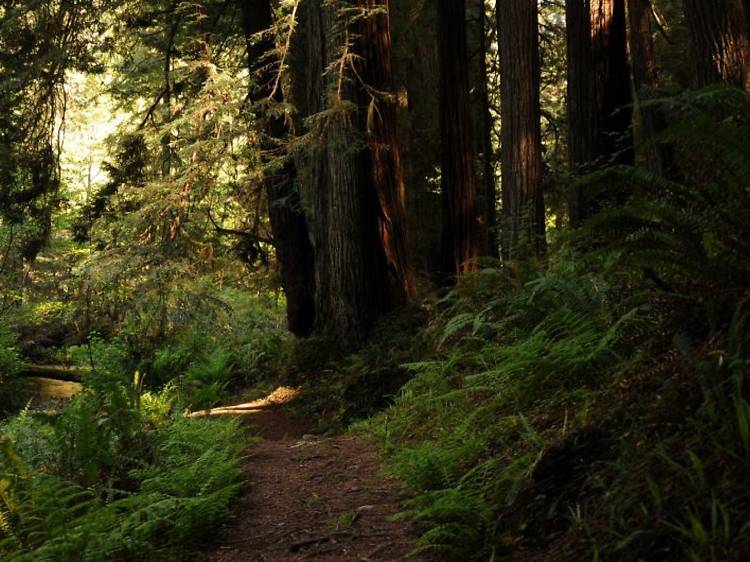 What is it? An exceptional Humboldt County redwood park that’s starred in numerous fantasy flicks including a certain galaxy far, far away.

Why go? Given that the earliest redwood fossils date back to the Jurassic period, it makes sense that this Humboldt County park would serve as a backdrop for marauding dinos in Jurassic Park 2: The Lost World. Its otherworldly landscape also inspired George Lucas to cast it as the ewok-inhabited moon of Endor in Return of the Jedi. Today, the park dazzles with stirring landscapes such as the one found at its blockbuster attraction, Fern Canyon, a narrow creekbed bounded by towering walls of lush ferns and dripping moss. While exploring the park, keep watch for magnificent Roosevelt Elk which graze in the preserve’s grassy meadows and beachside scrub. 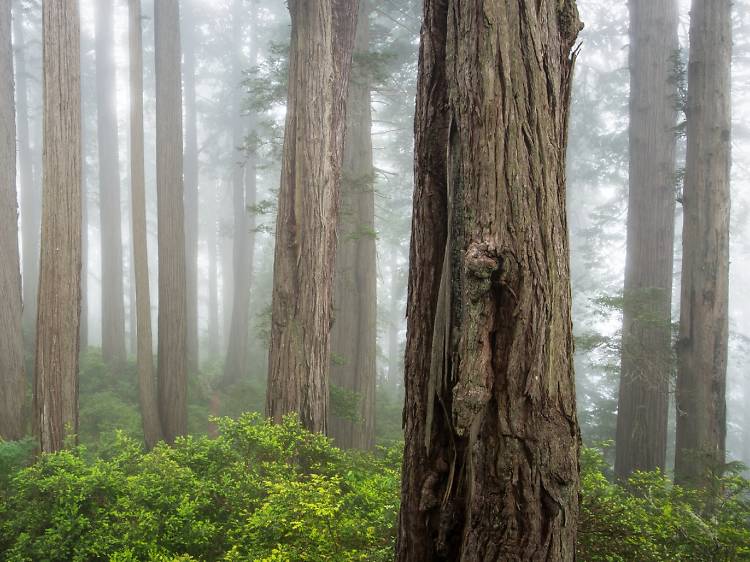 What is it? The home of the tallest tree in the world offers a glimpse of the California coast before the loggers arrived.

Why go? You likely won’t see Hyperion, the 380-foot, Guinness World Records entrant whose location is kept secret to protect its fragile root system, but you’ll hardly miss it given the park’s wealth of magnificent redwood groves. In fact, Redwood National and State Parks is home to 45 percent of California’s remaining old-growth redwoods. You’ll find the biggest bark for your buck on the nature trail that loops through the fog-shrouded Lady Bird Johnson Grove, and the Trillium Falls Trail which leads through lush, fern-blanketed old-growth groves to its namesake cascade. 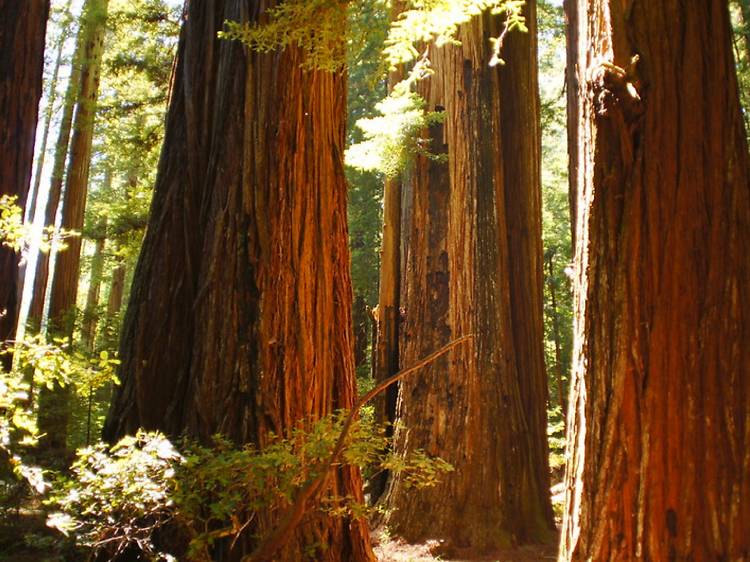 What is it? California’s biggest redwood park lets you experience the redwoods without leaving the car.

Why go? Situated along a former stretch of the original Highway 101, the 32-mile Avenue of the Giants winds through richly dark redwood forests, lending front row views of their woodsy grandeur. Pick up an auto tour guide at the Visitor Center which is crammed with fun, historical objects and tales including the Travel Log, an RV-like vehicle carved out of a redwood log that was driven across the U.S. by early conservationist, Charles Kellogg. Don’t miss a stop at Founder’s Grove whose nature trail leads past the Dyerville Giant, a fallen, 362-foot behemoth that allows rare, up-close glimpses of a redwood’s lengthy span. 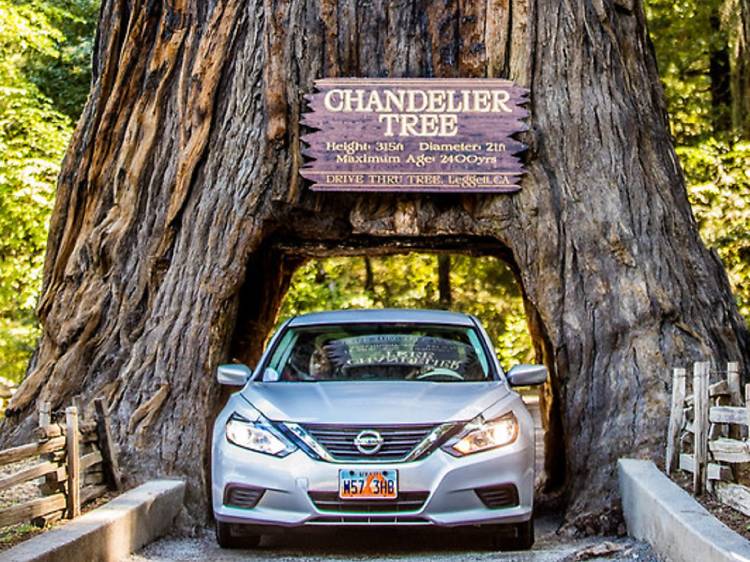 What is it? A 300-foot redwood provides the tunnel; you supply the car.

Why go? When you feel the need to drive 2,000-pounds of machinery through an ancient life form, pull over at this kitschy 1930s roadside attraction. With a 21-foot tunnel carved through its trunk, the celebrity tree—named for its chandelier-like branches—hosts tens of thousands of smiling motorists each year. After snapping the requisite SUV-in-a-tree photos, roll on over to California’s two other drive-through trees: Tour Thru Tree in Klamath (Klamath County) and the Shrine Drive-Thru Tree in Myer’s Flat (Humboldt County). 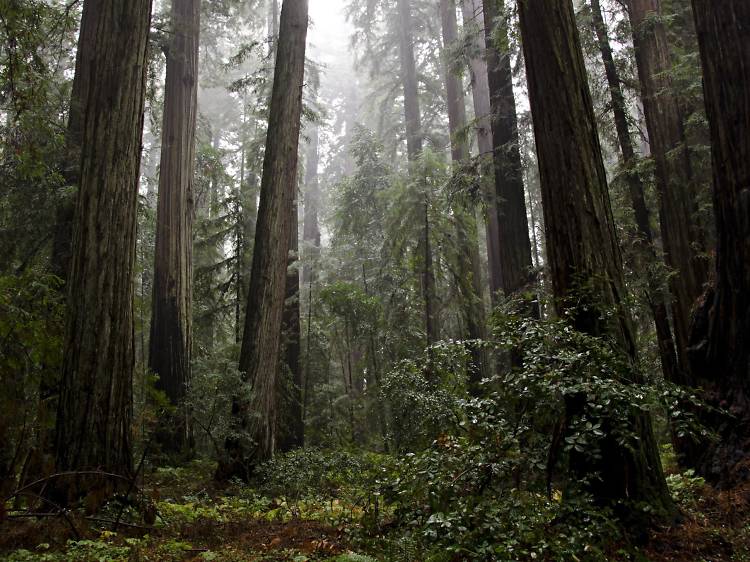 What is it? A Mendocino County gem with redwood groves, swimming holes, and a hidden hermit hut.

Why go? Situated in the bucolic, yet often-overlooked Anderson Valley, this park preserves two redwood groves: Big Hendy and its more diminutive sibling, Little Hendy. At Big Hendy’s sorrel covered grove, you’ll strain your neck gazing upon skyscraping trees over 300 feet high, and 1,000 years-old. During the 1960s and 70s, a Russian immigrant dubbed the Hendy Hermit lived in these woods using downed trees as makeshift shelters. You can see two of them—and a brief story about his life—on the Hermit Hut Trail. Nearby, the Navarro River offers a string of swimming holes to dip into on warm days. After your visit, pick up organic fruit and homemade preserves at the Apple Farm whose honor system stand is located down the road. 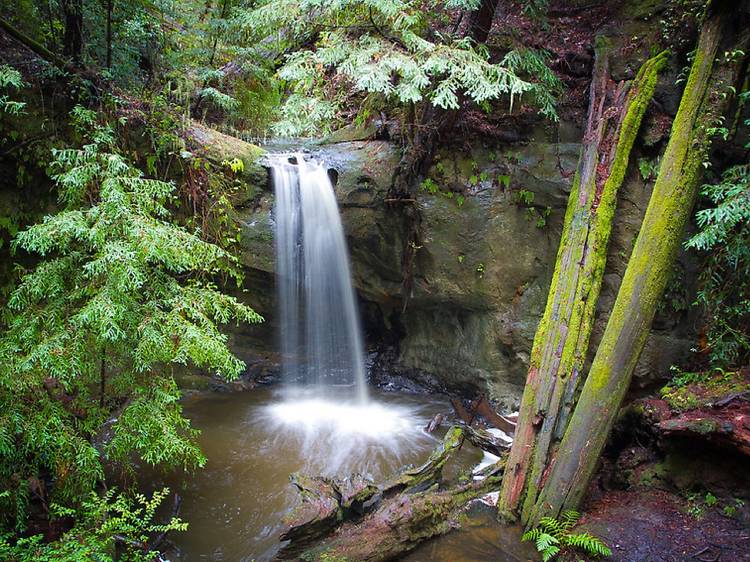 What is it? Set in the Santa Cruz Mountains, this 18,000-acre preserve lures visitors with redwoods, waterfalls, and epic trails.

Why go? Big Basin’s ancient redwood stands—some thought to be 1,800 years old—inspired the state’s first redwood conservation efforts when local community members banded together at the turn of the 20th century to save the trees from rampant logging. Today, their accomplishments are on full display on the .6-mile Redwood Loop Trail which skirts the park’s largest trees such as the Mother of the Forest with a whopping 70-foot circumference. From the visitor center, you can also follow a Sequoia Trail to Sempervirens Falls, the easiest to reach of the park’s many waterfalls, or lace up the hiking boots for a 12.5-mile segment of Skyline-to-Sea trail which ambles down to Waddell Beach. 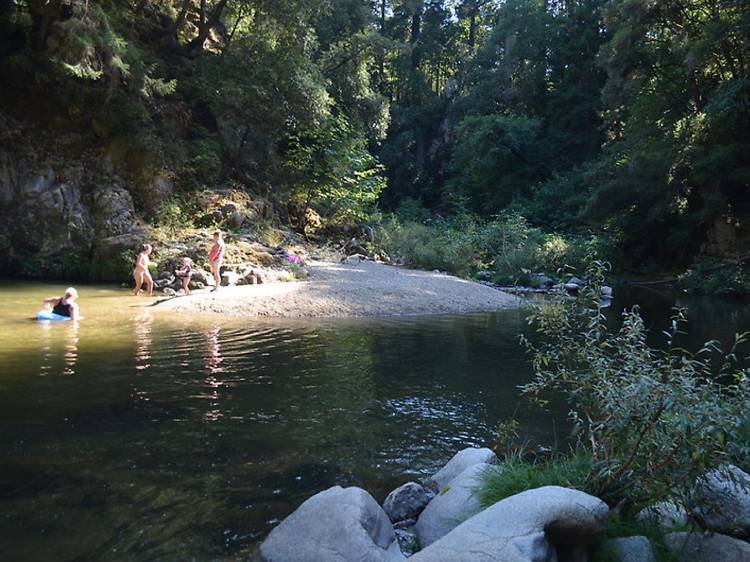 What is it? Santa Cruz County’s redwood-shrouded, outdoor playground.

Why go? Less than five miles from the sunny beaches of Santa Cruz, you’ll discover a 40-acre grove of old-growth redwoods that was spared the extensive logging of the 19th and 20th century. Grab a self-guided brochure from the visitor center or download an audible tour, and follow the park’s signature, .8-mile nature trail which passes alongside notable trees such as the Fremont Tree whose massive, hollowed out trunk invites group photos. The park’s diverse landscape, which includes the sandy terrain of an ancient seafloor, is laced with 30 miles of trails that lead to other highlights including an observation deck with sweeping views of Monterey Bay, and swimming holes such as the hidden Garden of Eden along the mighty San Lorenzo River. 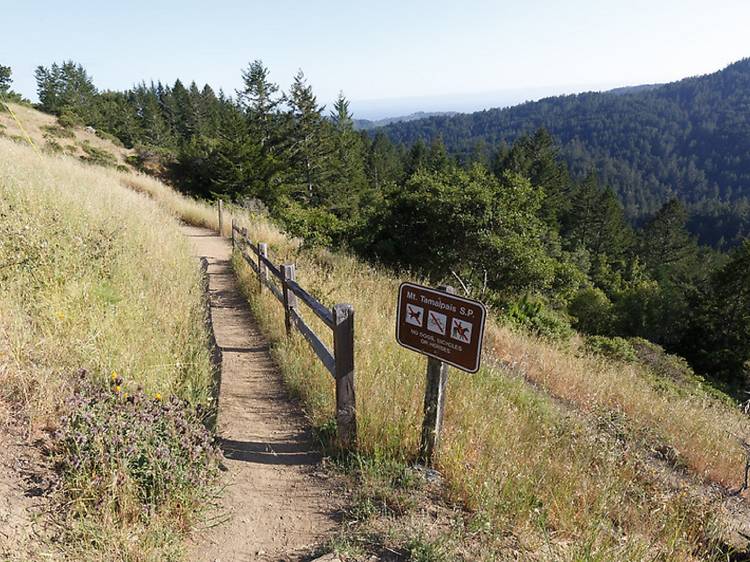 What is it? The state’s most visited redwoods park teems with big trees and colossal crowds.

Why go? Located roughly 12 miles north of the Golden Gate Bridge, this national park in the San Francisco Bay Area packs a ton of scenery into its 558 acres. A series of connecting loop trails allow you to stroll as far as you choose into the forested valley with highlights including the hushed Cathedral Grove, spawning salmon in Redwood Creek, and further ventures to neighboring spots such as Muir Beach and Mount Tamalpais. Note that due to limited space, all visits must be reserved in advance via gomuirwoods.com where guests can book a parking space or a ride aboard a shuttle bus. 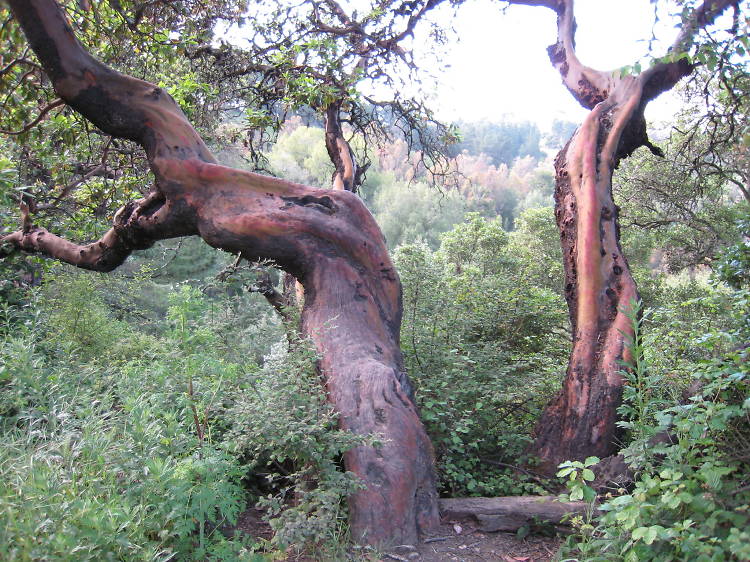 What is it? A surprising cluster of captivating redwoods in the hills above Oakland.

Why go? On busy weekends and summer days, skip the crowds at nearby Muir Woods with this less-frequented escape that feels worlds away from Oakland’s bustling city center. The 1,830-acre park features nearly 40 miles of trails that traverse a varied landscape of second-growth redwoods, evergreens, and grasslands teeming with wildlife such as deer and golden eagles. Most visitors will be content to amble along the Stream Trail will skirts Redwood Creek through lush redwood groves dotted with alien-like funghi. Beforehand, stock up on goodies at Oakland’s farmers market, and spread out at one of the park’s scenic picnic areas. 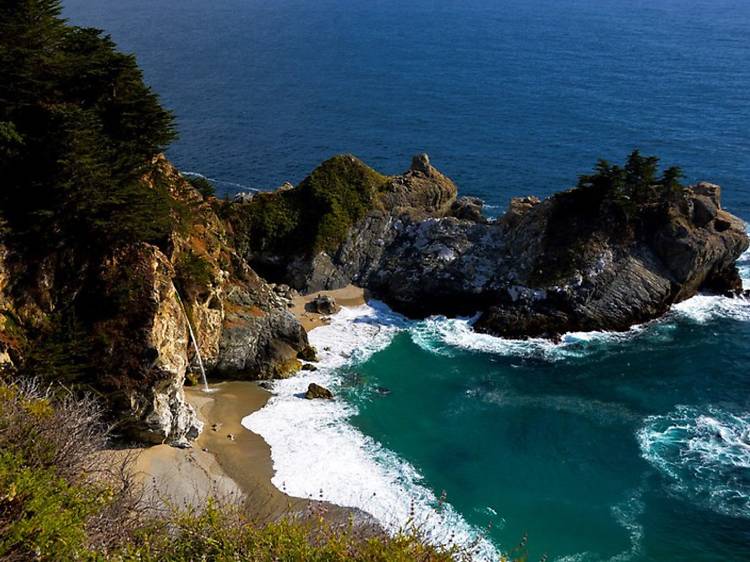 What is it? Hiking, camping, and swimming amidst the coastal splendor of Big Sur, the southernmost point for California redwoods.

Why go? What this park’s redwoods lack in scale compared to their Northern California brethren is made up with an exceptionally picturesque setting along the Big Sur River, and against an inspiring backdrop of the lofty Santa Lucia Mountains. Recent fires have closed some of the park’s popular trails, but you’ll find the park’s biggest trees on a short, self-guided nature trail near the historic lodge. The park’s 189 campsites—some of the most coveted in the state—allow you to pitch a tent amidst the massive trees and alongside the river. During the summer, cool down with a plunge in the deep, crystalline pools found toward the rear of the campground. 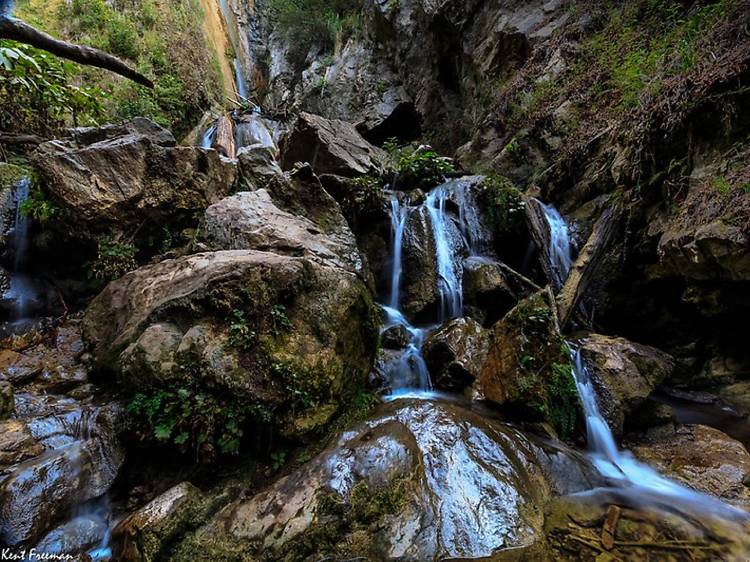 What is it? A coastal redwood park that hides historic kilns and a 100-foot waterfall.

Why go? Situated along Big Sur’s famously scenic coastline, Limekiln State Park is one of California’s few redwood parks with an easily accessible beach. Head inland via the Limekiln Trail, crossing seasonal bridges over rippling creeks, and you’ll discover the ruins of hulking stone kilns that were used to process lime—a key ingredient of the concrete that built cities such as San Francisco—from an adjacent limestone deposit during the 19th century. Backtrack to the connecting Falls Trail, and follow it alongside Limekiln Creek to a cascading, 100-foot stream over a rocky, limestone face.