Alex Gibney: 'An interview with Assange would be one long speech'

The Oscar-winning director talks about how he made ‘We Steal Secrets: The Story of WikiLeaks’, and reveals why Julian Assange refused to take part in it

Alex Gibney’s documentaries shine a light on some on the most troubling issues of our times. He won an Oscar for the Iraq War film ‘Taxi to the Dark Side’, investigated corporate dysfunction in ‘Enron: The Smartest Guys in the Room’ and exposed the Catholic church’s failure to deal with paedophile priests in ‘Mea Maxima Culpa: Silence in the House of God’. His new film ‘We Steal Secrets: The Story of WikiLeaks’ explores the two men at the heart of the WikiLeaks story: Julian Assange and Bradley Manning, the American soldier on trial for leaking classified files.

You started making this film when Julian Assange was embroiled in a legal battle in the UK – holed up in Norfolk. Is it hard to know what film you’re making when everything is so up in the air?
‘It’s a bit like writing a script backwards, you only know what it is at the end. The film definitely changed. When it started we thought it would be solely about Julian Assange, but then Bradley Manning took over and became the film’s moral centre. Assange desperately wants to be thought of as an equivalent to Manning, but Bradley Manning is in far greater jeopardy, has taken greater responsibility, and is ultimately the far greater moral figure.’

With ‘Mea Maxima Culpa: Silence in the House of God’ it was easy to take a moral position as a filmmaker. Here it’s more complex. Did you believe that the WikiLeaks material should have been leaked?
‘I thought it was important that it was leaked because we learned a lot that we didn’t otherwise know – but perhaps not in the way that it was done. Assange did it perfectly with the ‘Collateral Murder’ video, but he made a mistake with the Afghan War logs by not redacting. At the same time, from a national security perspective, Bradley Manning broke the law and pleaded guilty to doing so.’

Some people in the audience will already have their own views about Assange and his story. But were there moments when your opinions were overturned?
‘The Swedish episode [allegations made by two women, which Assange denies, of sexual assault and rape] was the a-ha moment for me. The revelation was that Assange intentionally distorted the story, since it wouldn’t look good for the Grandmaster Flash of the transparency agenda to refuse to take an HIV test – all because he doesn’t like wearing a condom. The idea of an international conspiracy where the US was hiring CIA agents to entrap him so he could be extradited to Sweden and sent to Guantanamo then proved to be a grand fiction. That’s a spectacular fable straight out of “The Girl with the Dragon Tattoo”.’

So the whole story turns on the question of a torn condom and whether that constitutes a sexual offence?
‘In the context of the thousands of people who’ve died in Iraq and Afghanistan it doesn’t compare. But at the same time, it’s a lie. Here’s a man who wanted to hold governments to account, but he is obsessively trying to avoid being held to account himself. Had he agreed to take an HIV test as the women in Sweden asked him to, it would have ended there and then. But his attitude was basically, “I’m Julian Assange! How dare you ask that of me!”.’

You’ve been criticised online for being negative about Assange…
‘At a time when people like their heroes simple, any criticism is taken as a repudiation of what those heroes represent. Assange has called the film ‘anti-WikiLeaks’, but if you actually watch it, you’ll see that it embraces the principles that WikiLeaks espoused, and it comes out pretty strongly against abuse of power, particularly by the US government.

Were you disappointed that Assange refused to give you an interview?
‘Yes and no. I really did want him to sit down and give me his perspective. But after talking to him for six hours, it was clear that an interview with him was going to be one long speech. He didn’t seem much able to be the kind of reflective character who would convey what he was feeling and thinking in each moment of his story.’

Was it right then to use filmmaker Mark Davis’s observational footage of Assange on the road before he was famous?
‘We discussed that a lot. I showed Mark all the material so he felt he was being fair to Julian who’d agreed to be filmed, and I felt I was being fair to Mark because I wasn’t distorting what had happened in the moment he was filming. And it’s great footage, because without it you can’t understand the David and Goliath aspect to the story. It captures a moment when Assange is a very appealing David – before he became his own Goliath, and turned into the very thing he’d been campaigning against.’

‘We Steal Secrets: The Story of WikiLeaks’ opens in UK cinemas on Fri Jul 12.

'We Steal Secrets: The Story of Wikileaks' 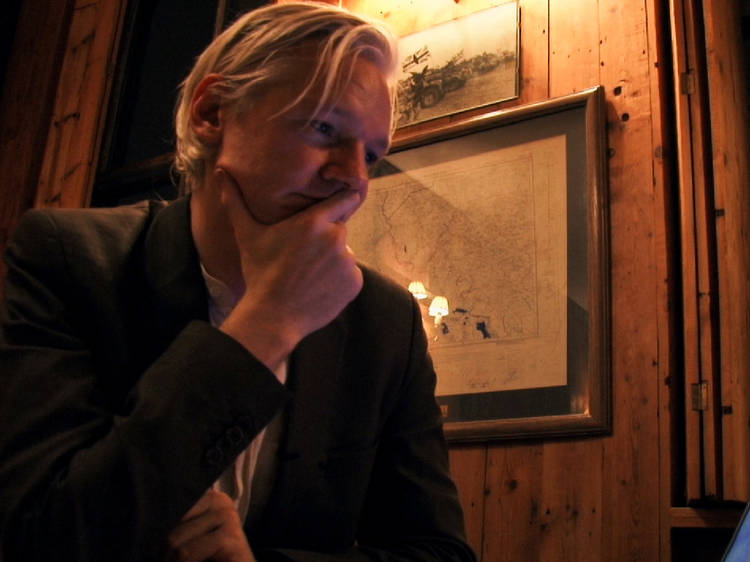 We Steal Secrets: The Story of Wikileaks

This thorough, engrossing film shows how idealistic Aussie hacker Julian Assange took on the might of the US, exposing their military and diplomatic misconduct, then allowed his own murky personal life to tarnish his credibility.

Events are still unfolding, so this is a snapshot in time, but Gibney’s conscientious, revealing document proves a mine of valuable information and affecting emotional insights.

Read review
See the 'We Steal Secrets: The Story of Wikileaks' review