It’s 7.15 on a Saturday morning, and Benedict Cumberbatch is trying but failing to leave his Hampstead home and jump into a car to the airport. He keeps forgetting stuff, running back in, grabbing more things. ‘I’m useless at getting into a car. I always think of five things I have to have before I leave. It’s like threshold anxiety!’ This early hour is the only part of the day when the 38-year-old has a decent amount of time to talk, and he’s on the phone with me all the way to the check-in desk, talking fast about everything he’s up to.

Most recently, he’s been recording the voice of the tiger Shere Khan for Andy Serkis’s new film of ‘The Jungle Book’ and rehearsing his role as Richard III in a series of upcoming Shakespeare plays for the BBC. Today he’s catching a flight to Toronto for the film festival where he will introduce ‘The Imitation Game’, a film in which he plays wartime hero Alan Turing, the mathematician who helped break the Nazi Enigma code and then faced postwar persecution because of his sexuality. The film opens the London Film Festival next Wednesday and is already being mentioned in the same breath as the Oscars. If anyone in cinema is on a high right now, it’s the actor once known as ‘that guy in “Sherlock”’.

So, here we are, at the crack of dawn on a Saturday, talking shop. Something tells me you’re busy these days. Are you good at juggling so many jobs?
‘I’m chuckling wryly because me getting out the door this morning was like a child who’s never travelled before – having something like a panic attack about not having the right pacifier or teddy. Honestly, it’s not that I’m being reduced to some spoilt, pampered celebrity; it’s just the anxiety of having a brain full of work. I have about four work heads on while leaving the house.’

Can you cope?
‘Am I able to do it? When I get to Toronto I need to find a dark, lonely corner in the airport and literally just breathe and meditate for ten minutes to clear my head. But I can. That’s the thing. As long as I get enough rest and keep fit and healthy, I seem to be all right at compartmentalising; I’m also getting much better at prioritising – those are the two secrets really.’

Last year you were the villain in a blockbuster, ‘Star Trek Into Darkness’, and then worked with Steve McQueen on the Oscar-winning ‘12 Years a Slave’. Do you feel an urge to work as much as you can now in case it all ends?
‘No, I think that’s a big mistake, as you screw yourself into the ground if you do that. My diary may be full until 2016, but I’m doing things that I choose carefully. And the most important thing is being able to make sure it continues. I’m not an overnight success, I’ve been doing it for 12 years. It’s been lovely and varied so far, but not all at this level. It’s odd, isn’t it? This business we’re in is all about the moment. But there is stuff that continues, like “Sherlock”, and my production company, which I’m building. Then I’ll be doing “Hamlet” at the Barbican for three months straight next year.’

Are you already thinking about your Hamlet?
‘The great secret is to think about it a lot before. I approached Lyndsey Turner to direct me about a year ago. We took three months to decide on a venue. It’s been a gorgeous, long runway and we already spend days looking at the play and talking about it. We’re treating it like a new play at the Royal Court. It helps push any anxiety about other Hamlets I’ve known far from my mind.’

You play Alan Turing in ‘The Imitation Game’. What is it about him that resonated with you?
‘I’d keep hearing: “Oh, Alan Turing? Wasn’t he something to do with Bletchley Park? Didn’t he create the Apple logo? Didn’t he bite an apple?” But not many people know the whole story, that he invented the computer, broke the Enigma code, was prosecuted for being a homosexual and underwent a year of oestrogen injections before dying in 1954. The irony and sickness of it was extraordinary! He wasn’t shouting from the rooftops or trying to start a cause, he was just a man who was gay. He’s such a quiet hero.’

There’s humour in the film too – in how your Alan Turing takes everyone so literally.
‘He’s so endearing as he has a zero-filter policy with language. He sees it as an utter logical construction. Sometimes it looks like he’s being a provocative eejit, but he’s just being true to who he is. The danger is that we’re putting someone who’s slightly on the spectrum in social situations and finding him funny. It’s not that. He doesn’t have the sociopathic thing that Sherlock Holmes has, where it’s just a complete disregard for anyone’s importance or intelligence but his own.’

Your character in ‘12 Years a Slave’ was very different. What was it like at the Oscars last year when the film won Best Picture?
‘Oh god, I had a ridiculously good time. I was a little nervous, but then I got there and, like everything on screen, it was smaller than you expect it to be. I felt like I crashed the party a bit.’

You were snapped jumping up behind U2 on the red carpet.
‘Yes, I photobombed U2! But that was all Ellen DeGeneres’s fault because she plied everyone with vodka on the red carpet. Her team was handing out these miniatures. A friend really wanted me to get a photo with U2. So I just saw the opportunity and I’ve never felt an impulse like it. I spotted them all standing around and I thought: Perfect! It wasn’t preordained or anything. I just did it.’

How was the ceremony?
‘I sat next to Brad and Angelina, and they were treating me like anybody [else]. They said: “You know, Benedict, this can be pretty tiresome.” Then after the second award we were up on our feet and dancing to Pharrell. We had a lot of fun. I think Ellen DeGeneres cracked it. And then to win. Oh my god. To be there for that was just amazing.’

I saw that you recently took the ALS Ice Bucket Challenge very seriously. You did it several times and made a whole short film of it.
‘Yes, I chose all the shots and rehearsed it with my niece – who acted as my director of photography! The first time we tried it she’d stopped filming and I had to do it all over again. I got a cut above my eyebrow from the ice.’

You did it several times.
‘Yes, well, Tom Hiddleston had done it once, and then the Internet was asking when I was going to do it and if I’d wear a white T-shirt apparently. And I actually did wear a white T-shirt for the last one, which they [the fans] were apparently quite happy about, so I was saving the Internet! My agent rung me about it first. I was all: ice bucket what? And I was in the middle of doing Shere Khan and some voice work for “The Hobbit” and something else. Then I cottoned on to what it was and what it was in aid of and I thought: I need to do this properly. I was late and had been nominated more than once so I did it a few times.’

Your nominations were interesting: the producer Harvey Weinstein, Kylie Minogue and Lewis Hamilton. Why them?
‘I thought it was a bit grubby: how far can you cast your celeb friends net? But I wanted a really diverse set of people. I thought Hollywood in general would thank me for throwing ice on Harvey, who’s game. Then Kylie’s just really game and sport and super sweet, and that sent it into the world of music. Then I was bringing it back to the British thing with Lewis Hamilton.’

‘The Imitation Game’ is already being talked about in Oscar terms, and Harvey Weinstein, who loves Oscar campaigns, is putting it into cinemas in the US. Are you ready for the work that goes into that?
‘I’m not even sure I’m available for the work that has to go into that.’

Have you told Harvey Weinstein?
‘Oh yeah, we’ve had a few conversations, but it doesn’t seem to have registered. I still get calls about flying to America to do half an hour on a talk show. Harvey and I are friends because we want the same thing. He’s so smart, he’s brilliant. But the most important thing is that people see the film. The minute there’s a buzz about any film, the word “hype” arises and it pours water all over the flame. I just want people to see it and judge for themselves.’

‘The Imitation Game’ opens the London Film Festival on Oct 8 and opens in UK cinemas on Nov 14.


Watch the ‘The Imitation Game’ trailer

Read more about ‘The Imitation Game’ 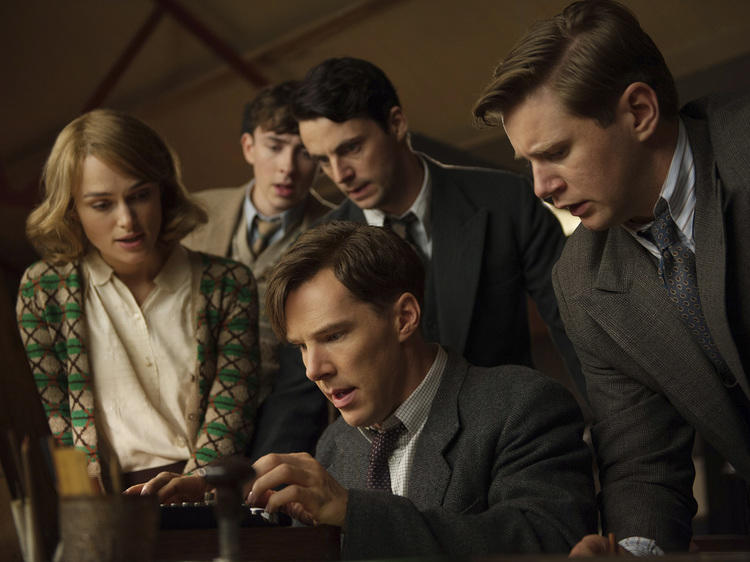