As ‘Bridget Jones’s Baby’ hits cinemas, we ask the film’s stars and director how Bridge is coping in the city in generation Tinder

‘I knew Bridget better 12 years ago!’ Renée Zellweger is laughing. She’s ditched the British accent and is speaking in her soft Texan drawl – but the laugh is pure Bridget Jones. ‘So much time has passed. It was a very happy reunion, but a challenge to figure out how she’s changed.’

We’re chatting because, after more than a decade, the wine-drinking, wobbly-thighed, wanton sex goddess is back – with a bump. And exactly how have the intervening years changed Helen Fielding’s hapless heroine? Well, Bridget is 43 now. There’s no calorie counting (she’s at her ideal weight) and no smoking. But despite that happy-ever-after at the end of ‘The Edge of Reason’ in 2004, she is not Mrs Mark Darcy.

Why did Zellweger want to wiggle back into the granny pants after all these years for ‘Bridget Jones’s Baby’? ‘I love the character. In my heart it was an immediate “Yes”. I couldn’t wait to catch up with her. And I like the idea of revisiting a character, checking in with her at different stages of her life.’ According to Zellweger, Bridget has made it okay be who you are. ‘I’m a late bloomer myself. She is challenging certain paradigms about what our lives are supposed to be by a certain time in our lives, what it is that we imagine our lives are going to be versus the reality.’

And what about London? How has the city changed? Bridget is living in the same flat in Borough Market, but now owns it. How on earth did she afford that, I ask ‘Bridget Jones’s Baby’ director Sharon Maguire? ‘We rationalised it because there’s a railway line running either side of the flat, so basically it’s Piccadilly station. The whole flat rattles.’ Borough Market itself is unrecognisable, though, completely gentrified into a foodie heaven since the last movie. ‘When we chose Borough in the very beginning [of the franchise], it was quite unglamorous. It was just basically a market with lots of run-down buildings around it. Now, it’s so chi-chi it costs £8 for a potato.’

Don’t expect to see Bridge meeting up with the old gang for one too many bottles of chardonnay on the South Bank, though. Shazza, Jude and Tom are settled with babies. ‘You don’t go out every night getting drunk and trying to get off with people once you’re married with kids. That is one of the facts of life,’ laughs Sally Phillips, who plays Bridget’s BFF Shazza. She should know; she’s got three kids. ‘There’s something poignant about seeing everyone all these years later, older and full of regrets, faces smashed by sleepless nights with their children.’

The dating-by-app generation has completely passed Zellweger by. ‘You don’t have to go anywhere anymore to meet people,’ she says incredulously. ‘I used to say: “I am not staying in this apartment! You wanna meet people you gotta go and meet ‘em.” But now that’s just not true, apparently! I learnt about Tinder last year. I couldn’t believe it.’

'I don’t think Bridget could cope with Tinder,’ adds Maguire. ‘She’s slightly a dinosaur in that respect.’

To replace Shazza and the gang, Sarah Solemani (‘Him & Her’) joins the cast as Bridget’s child-free thirtysomething colleague and new partner in crime, Miranda. Solemani jumped at the chance to appear in the film. ‘When I got the call: “Do you want to play Bridget Jones’s best friend?” I was like, “I am her best friend!”’ The character, she says, is close to her heart. ‘My mum would talk about things that had happened to her or her friends and say, “That was so Bridget Jones.” She passed away when I was 16, so it’s extra special to be connected to something now that she knew.’

Miranda’s generation of millennial feminists is good for Bridget, reckons Solemani. ‘Women now are a bit less self-deprecating. There’s a confidence. Me and my friends don’t feel there is still a huge pressure to get married and have children. Miranda says, “You need to just go out and have some sex.” That is basically Miranda’s arc: getting Bridget sex. And she succeeds!’

Which is how Bridget finds herself on the way to becoming a ‘geriatric’ mum. After a tumble with charming American Jack Qwant (Patrick Dempsey) during a wild festival weekend and a one-night reunion with Darcy at yet another christening, she’s pregnant and entirely unclear about who her unborn baby’s father is.

Now she’s back, is there any chance of a fourth film? Zellweger smiles before replying, quietly. ‘I love her so much – the physical comedy, her vulnerability, her openness. Yeah, why not? It could be interesting to watch her improvising her way through motherhood. And quite hilarious, right?’ 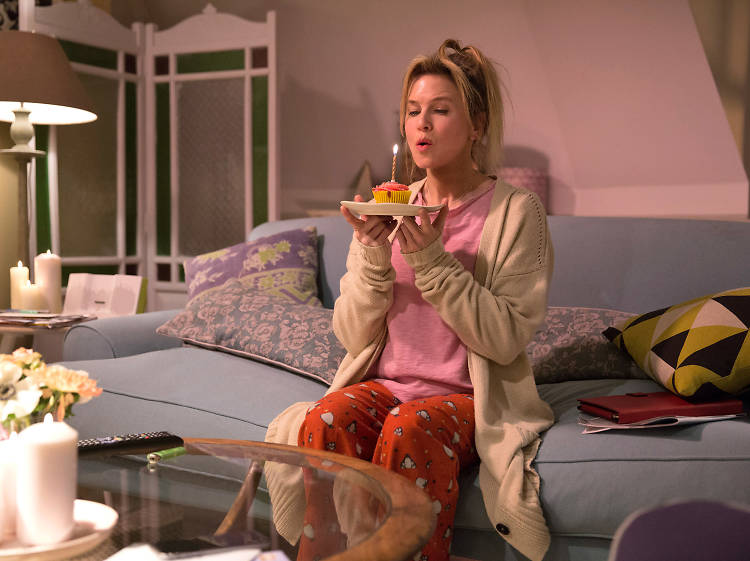 Clever old Bridget. There’s been a hell of a lot criticism of her for crimes against feminism. But here she is, triumphantly returning in her forties, less of a twit, funnier, wittier, and – perhaps most importantly – happier with herself. And unlike the last film in the series, ‘The Edge of Reason’, you don’t need to knock back several large glasses of chardonnay for this film to make you laugh.
Read review
Show more