Damien Chazelle: ‘Bond is the only franchise I’d be tempted to do’

The Hollywood wunderkind on ‘First Man’, Ryan Gosling’s hair and his love of 007

Being Damien Chazelle is an eventful business. Since ‘Whiplash’ in 2014, the French-American filmmaker has barely been out of the Oscar limelight. In 2017 he became the youngest ever Best Director winner with ‘La La Land’, at 32, and then, thanks to a horrifying onstage snafu, lost the Best Film Oscar after winning it. With his new movie – the also Oscar-tipped lunar landing drama ‘First Man’ – he’s had brickbats lobbed at him for not depicting Neil Armstrong planting the Stars and Stripes on the moon. The spotlight is not his natural habitat, he readily admits. He’s a bit ill today too, huddled in a coat, nursing something herbal, but he graciously fields my ‘Moonraker’-related questions.

I was very moved by ‘First Man’ but there were moments when I did think about ‘Moonraker’, and I wanted to check that you were okay with that.
‘That’s the first [time] I’ve heard that – that’s great. I am a giant James Bond fan. It wasn’t one of our key references but, then again, James Bond is a reference for everything for me.’

So would you want to make a Bond film one day?
‘I feel I’d give a different answer every time I was asked that. It’s maybe the only franchise that would be tempting. I grew up with it – Bond movies were one of the few things I could reliably get my dad to watch with me. It was a bonding experience, pardon the pun.’

There’s two threads in ‘First Man’: did you connect more with Neil Armstrong the pioneering astronaut or Armstrong the heartbroken parent?
‘I think it’s shifted. Armstrong the pioneer was my way in – someone driven to do the impossible – but I’ll never forget the first time Ryan [Gosling] read the script. He described the story in a way I hadn’t thought of, as a story about grief and a man trying to find some way to mend his heart. That became the movie’s driving force.’

Was Ryan aware of what he’d have to do with his hair in this movie?
‘We talked a lot about it. He was really excited about the military-style buzz cut. He said, “I might adopt this.” I think his head could breathe more. It’s just an iconic look and we were both adamant about going for it.’

Are you and Ryan pals away from the set?
‘Yes, but so far we haven’t really had much of the in-between films time yet, because I actually met him before “La La Land” in order to pitch this movie. He said “That sounds like a cool idea. I also hear you have a musical script.” So we bonded over musicals and did “La La Land” together, and as soon as that was done, I gave him the script for this. I love working with him. It’s never about walking on set and doing the lines; he inspires you because he’ll be off at Nasa or doing boot camp or taking flying lessons.’

Wait, he learned to fly for this movie?
‘He’ll tell you how good of a flyer he became, but he took a few months of flying lessons. Which made the producers somewhat nervous [laughs].’

‘The moon landing is so unfathomable that a group of
people don’t even believe it happened.’

Claire Foy is great as Armstrong’s wife, Janet. Where did you first spot her?
‘I discovered her in “The Crown”, but it took a moment for me to consider her for this. The idea of a British actor playing this Midwestern woman seemed like an impossibility. But she sent me a tape of herself doing a read of this old interview of Janet’s and I went from thinking it had to be an American to thinking it had to be Claire.’

Chazelle on the set of ‘First Man’

What was your reaction to the controversy over omitting the planting of the US flag on the moon?
‘I was surprised at first. I also understand that the moon landing as a whole is a symbolically weighty event for a lot of people. For me, this movie was about telling the untold story. To show moments we haven’t seen before, like Neil [Armstrong] at the crater and other private moments. That was the emphasis.’

Have you had moon-landing-deniers approaching you?
‘It’s funny, I used to get defensive about moon hoax conspiracy theories, thinking about what it would be like to go through all the difficulty and tragedy and drama to get to the moon only to be told it didn’t happen – that must be so insulting. Then it occurred to me recently that it’s the greatest compliment in a way, that the accomplishment is so unfathomable that a group of people doesn’t even believe it happened.’

You’ve been prodigious and prodigiously successful since you started out as a filmmaker. Do you get scripts sent to you now?
‘I get stuff sent my way but I don’t really read any scripts. I’m not sure I’d do a very good job with something that was outside myself. My fear of any other method of working is that I’d wind up on set and not really know what I was doing. If it didn’t feel like it was coming from inside me, I’d feel like an imposter.’

You’ve talked about how nerve-racking awards season is. What’s your coping strategy for this film, if it makes the cut?
‘I haven’t thought that far ahead. I get stressed even thinking about it. I’ve got a little bit better at dissociating myself from it with each successive movie, and I hope to continue in that direction.’

And aside from your student film, all of your movies have been through the Oscar process.
‘I count myself very lucky, but I’m an anxiety-prone individual so I go through moments of asking myself if this is the right line of work for me. Right now, I’m just trying to write and keep myself busy so I don’t think about it!’

You need a doppelgänger.
‘That’s a great idea. I could just split myself in two and let Damien A do all the outward stuff.’

What was the first thing you did after the Oscars announcement mix-up?
‘I went on vacation. I had a nice week or so with my [then] fiancée in Mexico.’

You’re the youngest Best Director in Oscar history. Clint Eastwood is the oldest at 74. Do you have ambitions to bookend your career in that way?
‘I’d love to still be making films then. That’s what’s so inspiring about people like Clint; I’d love nothing more than to be making films at that age. I used to be inspired by this great Portuguese filmmaker, Manoel de Oliveira, who died recently well into his hundreds and was making films from the silent era all the way up to the end of his life. Near the end of his life, an interviewer asked him what was next and he said, “There’s this big project I really want to do, but I’m not quite ready for that one.” I read that and thought: You’re my hero.’

Where do you keep your Oscar?
‘Right now, it’s in the same room as the projector – a spare bedroom. It’s in a drawer: out of sight, out of mind.’ 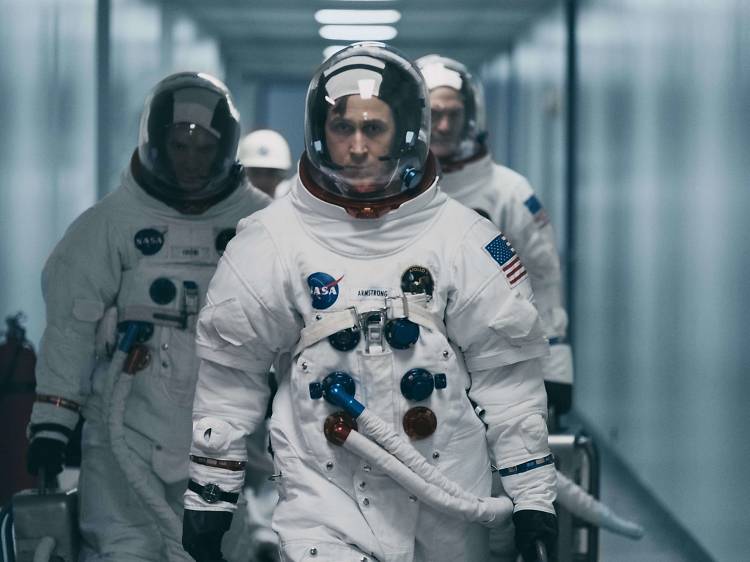