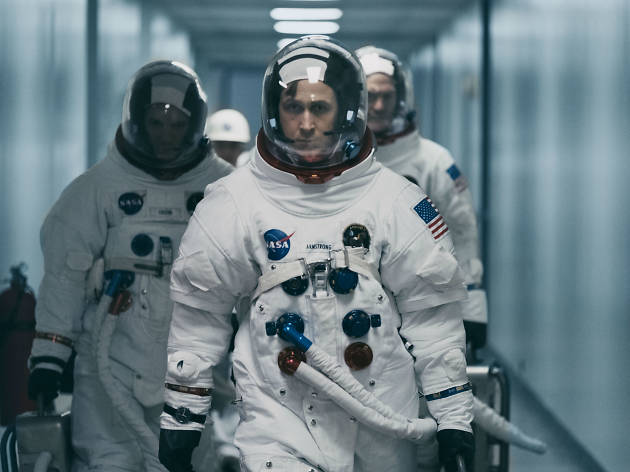 A stellar injustice: Hollywood has made a movie about a faked Mars landing—1977’s deliriously silly ‘Capricorn One’—but has never given the historic first moon landing its due. That’s not so hard to explain. While inspiring on a global scale, the 1969 accomplishment was pretty straightforward, dramatically speaking. Cool competence ruled the day and made it happen. The real thing was better than any film could be.

Thrilling when it escapes the gravity of drab living rooms and offices, ‘First Man’ does an admirable job of complexifying a well-told tale. It presents Neil Armstrong (Ryan Gosling, suitably square) as a guy who, in 1961, was both puncturing the barriers of human knowledge by flying experimental planes 140,000 feet over the Mojave Desert, as well as someone who was banging his head against the finite limits of a medical science that couldn’t save his daughter from a malignant brain tumor.

Faced with that pain, Armstrong (if we’re to believe Josh Singer’s script, sourced from James R. Hansen’s authorised 2005 biography) did what many military men of the ’50s and ’60s did: shut off emotionally and turn inward. ‘First Man’ makes Gosling colder than he was in ‘Blade Runner 2049’ as a replicant, itself a NASA-level achievement. Claire Foy, already stranded in one of those underwritten astronaut-wife roles, has so little to work with from Gosling, her big meltdown scene takes on a desperate grandeur.

But you come to appreciate Gosling’s reserve, his shirt-and-tie starchiness and the way he solemnly shakes his young son’s hand at the dinner table instead of verbalising that it may be their last meal together. ‘First Man’ rides this idea, that Armstrong’s cool-headed stoicism was required to accomplish the impossible. It’s a concept that somewhat hamstrings ‘La La Land’ director Damien Chazelle from unleashing what he usually can do with actors, but he gets at emotions through alternate means: He’s made another dance movie, the spacecraft waltzing in Kubrickian harmony, the stars glinting.

That’s the main event you’re coming to see, and Chazelle adds layers of historical complexity to his already stratospheric technique. Before the lunar attempt, he cuts to rioting hippies, not thrilled with the colossal expense of the mission, as well as archival footage of Kurt Vonnegut suggesting that an ‘inhabitable New York City’ might be a worthier goal. By the time Chazelle hits his ‘Right Stuff’ moment, the astronauts striding down the platform toward destiny, the launch has come to mean a million different things – including, ominously, an opportunity for a worldwide funeral. (We hear William Safire’s unused presidential speech, written in case it turned out to be a disaster.)

And then it happens: the eeriest, most heart-stopping sequence of the year. (You can't understate the importance of composer Justin Hurwitz’s suspenseful John Barry-ish score and – you feel the freshness of this – an utter lack of cheering crowds back home.) ‘First Man’ is comfortable in Armstrong’s quietude, his internalised grief put to cosmic purpose. Let those who come to the theatre counting American flags get incensed over nothing. They’ll miss something more provocative: a moment when the nation pursued excellence and, in turn, was celebrated for how smart it could be, and how big it could dream. That’s the statement Chazelle has made, one that deserves trumpeting.