Capturing the young Allen Ginsberg for a new biopic, Daniel Radcliffe has finally come of age

Thursday 5 December 2013
FacebookTwitterPinterestEmailWhatsApp
Advertising
Watching the careers of the Harry Potter kids is a bit like following a boy band after the split. Who will disappear? Who will emerge as the wizarding world’s answer to Justin Timberlake? Of all the Potter alumni, it’s Daniel Radcliffe who is proving himself to be a daring and accomplished actor. In his new film ‘Kill Your Darlings’, the surprisingly normal 24-year-old plays gay beat poet Allen Ginsberg as an insecure 17-year-old. The film is less a portrait of a literary legend and more a coming-of-age story about falling in love and taking drugs for the first time.

In ‘Kill Your Darlings’ you play Allen Ginsberg just as he starts uni. What’s he like?
‘He’s at that age when there’s a gap between who you are and who you want to be. You’re trying to find your identity and become independent. Reading Allen’s diaries you get a clear picture of him having belief in his own intellect. He has a pretty good idea that he’s going to be important. But not much of that confidence transfers to his social life.’

The film is about Ginsberg finding his voice as a writer. Does the same apply to you? Are you finding your voice as an actor after Harry Potter?
‘I don’t think that starts and ends with one film. But yes, I definitely feel like this was a big step for me. And not because ‘Kill Your Darlings’ is a more adult-orientated film. It’s more about what I felt I achieved. I felt happier with my performance than I have been with a lot of things. I’m proud of it.’

Are you a big researcher? The kind of actor who attempts to nail a person’s manner or facial tics?
‘I think if you’re concentrating on facial tics then you’re probably not thinking about the right things. But I like research. With Allen it was about finding an accent and a voice. Not the voice that everyone recognises from thousands of hours of archive poetry readings on YouTube. It’s the voice of a man who hasn’t smoked a million cigarettes yet. It was about finding something that felt honest and real.’

You don’t drink. Are you sold on the idea the beats had of doing your best work stoned?
‘No, I don’t buy that. It worked for those guys. But if you read Allen’s diaries, his approach to drug taking is scientific. He wrote down what drugs he took, what the effects were on him, on his writing.’
Do you feel the need to prove that you can act? Do people still assume you’re just a guy who got a lucky break aged 11?
‘I had a need to establish credibility in projects outside of Harry Potter. But I do think I’ve now shown that I can act, that I can do characters other than Harry Potter. I’m sure not everything I do for the rest of my career will be a roaring success, but I think I’ll always want to push myself.’

In 20 years’ time if someone referred to you as ‘that character actor who was amazing in that indie movie’, would you be happy?
‘Very happy. Absolutely. But I’m not really focused on how people see me. I just want to keep working. I get to do a really fucking – excuse my language – cool job that I love. If I can just keep doing that I’ll be very happy.’

Is true that you put your foot down about nudity after ‘Kill Your Darlings’?
‘No, that’s not true. What happened was there was a scene in [Sky Arts TV series] “A Young Doctor’s Notebook”. I came in and it had been rewritten with me nude. I basically said: “Guys, if this isn’t essential, then maybe don’t do it.” I did three films last year and I got naked in all of them. I don’t have a problem with it! I’m just not seeking it out. You don’t want to be the guy who’s known as an exhibitionist.’

But you do give us a flash of your very hairy toes in ‘Kill Your Darlings’.
‘It wouldn’t be the first time in my life I’ve been called a hobbit.’

You’re playing Sebastian Coe in a new film. Are you dreading the short shorts?
‘I will be wearing some very short shorts over the coming months. I also have a lot of hair extensions in at the moment while I film “Frankenstein”, which are long enough to be really annoying when I’m practising running.’

Are you a natural runner?
‘Pretty good. I’m fast. The thing I need to work on is smoking. I’m making an effort to stop. I’m cutting down.’

Have you tried electric cigarettes?
‘Yes. I was ready to be underwhelmed but they’re very good. If they make you cough then it must be a good thing.’

'Kill Your Darlings' opens on Dec 6.

Read our ‘Kill Your Darlings’ review 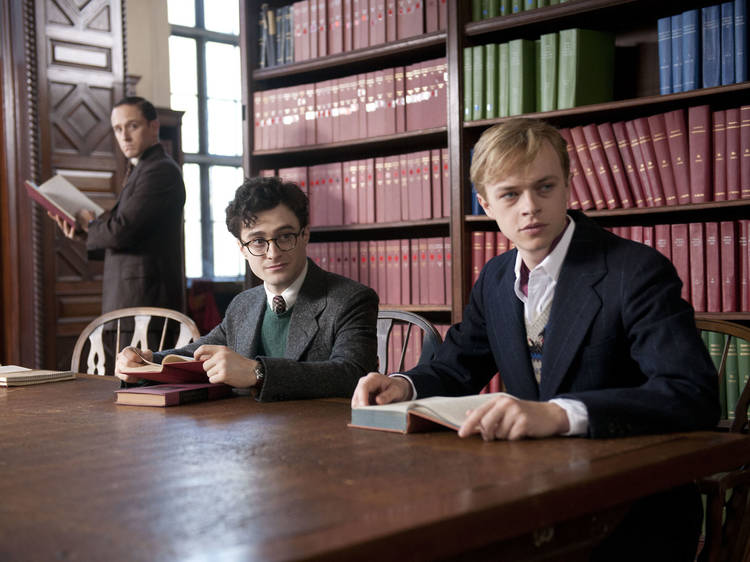 Daniel Radcliffe is back in a pair of nerdy round specs as Allen Ginsberg in this sincere, heartfelt film about how the gay beat poet found his generation-defining voice at college in 1940s New York.