Idris Elba: ‘In this city, when we go through tough times the pubs just get a little fuller’

The actor, DJ and OBE holder on his first lead in a Hollywood blockbuster, his Hackney roots and his love of steak and eggs

If Hackney is London’s coolest borough – and let’s face it, it is – Idrissa Akuna Elba is the coolest person from it. The 44-year-old actor is pin-sharp, hugely talented and, right now, at the top of his game. Following an electric breakthrough role, playing Baltimore gangster Stringer Bell in crime series ‘The Wire’, his career has come to boiling point over the past few years. First with his role in BBC detective show ‘Luther’. Then as Nelson Mandela in ‘Long Walk to Freedom’. Now, he’s playing his first above-the-title starring role in a major Hollywood blockbuster, an adaptation of Stephen King’s berserk eight-book fantasy series ‘The Dark Tower’. All while holding down a DJ side project that’s so legit he’s opened for Madonna.

The Golden Globe winner and, let’s not forget, OBE holder, hasn’t ditched his roots, though. Earlier this year he introduced Skepta at Islington Assembly Hall, giving an impassioned speech about the housing crisis in London. And, when Time Out caught up with him, he was back in Hackney to work on his directorial debut, an adaptation of cult gangland novel ‘Yardie’, shot just near his old school – a place he still calls his favourite in the city. We chatted to him about growing up as a Londoner, coming home and his love for a plate of steak and eggs.

‘The Dark Tower’ is out next week. How does it feel to be playing your first lead in a big blockbuster?
‘It feels really great. Seeing the fruits of my labour. I’ve been working a long time.’

Are you wary of how fans of Stephen King’s books will react to the adaptation?
‘If I’m honest, I imagine it’ll get mixed reviews.  It’s very rare that people who love a book are satisfied by the film. Stephen King is an author whose imagination is so wild, and everyone interprets for themselves what the things he writes might look like. People will go: “It shouldn’t look like that!” Even my casting was massively polarising. I suspect I might get a real bollocking for my performance. Or not!’

Did you give a damn about the controversy around your casting?
‘I didn’t – on purpose – pay attention. I go to work to work, I don’t go to work to read what someone thinks of me.’

You’ve just finished filming your directorial debut ‘Yardie’ in Hackney. Did it feel like a homecoming?
‘We were literally shooting on streets where I grew up. It was so great to finally make it happen: again, it’s been a long time coming. It’s a classic book, a period piece, and I’ve been shooting in London and Jamaica. What’s not to love?’

You had to rethink one action scene because of terror attacks...
‘That’s right. London has been dealing with a lot of violence, so you don’t get the permits to do really anything that involves guns. It’s just sensitivity around the recent attacks, being respectful of the public. So we just reimagined what we had to shoot and did it a different way.’

Between London Bridge and Grenfell, London’s had a tough summer. How do you judge the mood in the city at the moment?
‘It’s sad that there’s so much negative stuff going on. But there have been moments like this before in London, and I think it just makes communities get stronger. People look their neighbours in the eye in a way they haven’t for a while: to see who’s living next to them. In some places that might divide people, but I think in London it’s the opposite. In this city, when we go through tough times the pubs just get a little fuller.’

‘When I held an open audition for “Yardie”, half of London came out’

You can be quite political: I saw your speech about housing with Skepta at the Shelter benefit.
‘I faced homelessness once, and it just seems bizarre that young people are getting into this perpetual cycle. This is England, Great Britain, we shouldn’t be facing that. I’ve got a passion and I turned up to say: “Skepta’s here, support the cause.” ’

Do you still feel part of a community in east London?
‘Yeah, definitely. When I held an open audition for “Yardie”, half of London came out. I didn’t expect that.’

Can you still walk around without getting hassled?
‘I do get a lot of attention, yeah.  I miss the anonymity a little bit. That’s one of the reasons why you live in a big city, so you can blend in. But I don’t resent it. If I didn’t want to be recognised I would’ve been, like, a chess player.’

Do you think you’d have made a good chess player?
‘I do! I’m pretty cerebral. But what I mean is, I’m in the wrong profession to complain about being recognised. But people have goodwill. It’s like: “Idris, all right, mate?” They feel like they know you.’

Do you go out and eat in London? Where’s your favourite place?
‘I haven’t been out for fuckin’ ages! My favourite thing to eat is steak and eggs, wherever I go. But I don’t have a favourite restaurant, I tend to eat on the road a lot.’

Where would you say is your absolute favourite place in London? The place that means most  to you?
‘My old school, Queensbridge Primary School in Hackney. When I was shooting “Yardie” I’d go past it, this red-brick building: beautiful place. It’s like a family member.’

‘I spent the majority of my adult life broke’

What were you like as a kid?
‘I was pretty low-key. Really shy. I was definitely not the personality in the room that everyone flocked to. I just kept my head down.’

Your dad worked in the Ford car plant. Can you imagine a life where you followed him into that job? A quiet life in suburbia?
‘Making a living is making a living. But I don’t think I would’ve ever been the sort of person who just lives to work. I’d have had to break out. I’m inquisitive, I’d wonder what else is out there.  But yes, it could’ve been very different for me.’

When you left for the US to pursue acting did it feel like a step into the unknown?
‘I was blinded. It was a big cultural jump for me. I love New York but it was tough to get into the industry. The great thing about that city is that there are a lot of people who are like you – it’s a transient town full of people passing through.’

When we spoke a couple of years ago you were living in a caravan. Have you got a house yet?
‘Ha! Yeah, I’ve managed to put a roof over my head. The caravan was kind of proverbial, I was living from house to house and hotel to hotel, and I spent more time in trailers than I did in any one house. But directing my film was really grounding, I had to stick to one place.’

You don’t seem like someone who cares much  for material possessions.
‘I came into financial freedom late in my life.  I spent the majority of my adult life broke, so I have a different perspective on it. I’ve never had the room or the money to have exorbitant things, and I still just don’t really feel the need. I do have a few cars. A couple of motorbikes. But those are toys. My home is quite modest. I’m not really that fussed.’

You recently won the Rear of the Year award. Was that more or less gratifying than getting an OBE?
‘I think being recognised by my queen and country as an actor who has made a significant contribution to our industry is slightly more gratifying than someone saying I’ve got a nice pair of buttocks. That said, having a nice pair of buttocks is important! What people think of your ass is important.’ 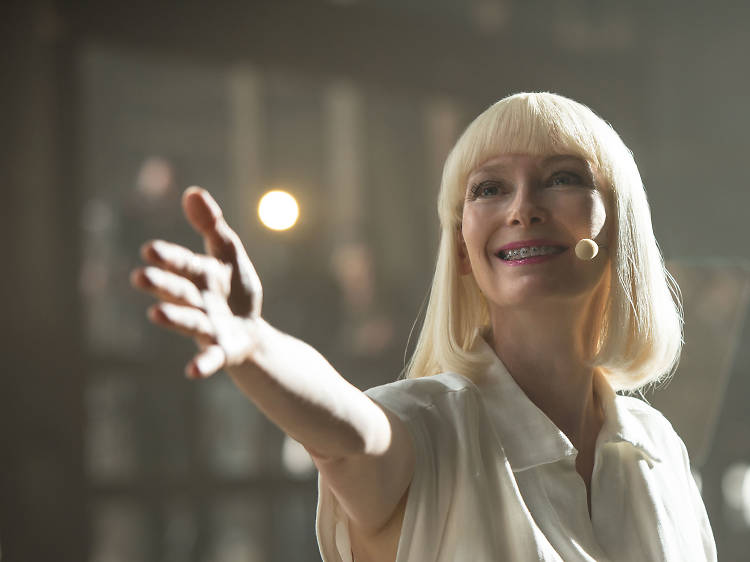