With a starring role in Angelina Jolie’s new World War II epic on the horizon, Jack O’Connell’s transition from ‘that kid from “Skins”’ to leading man is complete 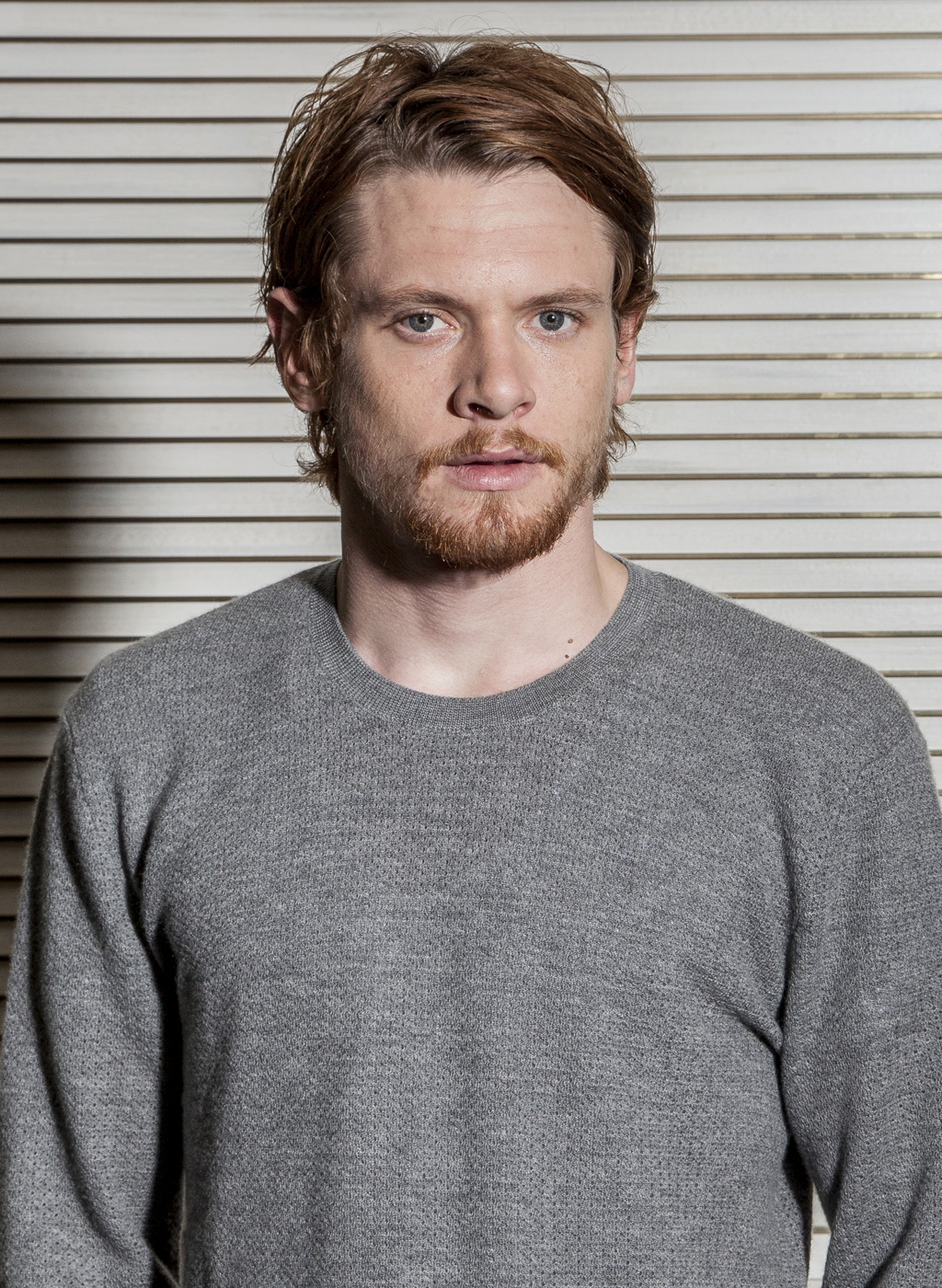 First there was Dev Patel. Then Nicholas Hoult and Kaya Scodelario. Now, the latest member of the ‘Skins’ cast to have their Hollywood moment is Jack O’Connell, picked by Angelina Jolie to star in her second film as a director, ‘Unbroken’. After considering thousands of potential leads, she cast the 24-year-old from Derby to play Louis Zamperini, the Olympic runner and WWII hero, who was stranded for 47 days at sea in a rubber raft after being tortured in Japanese prison camps.

Why did Jolie cast O’Connell? Watch him in ferocious new Belfast-set drama ‘’71’ and you’ll get it. He is electrifying as a young English squaddie trapped in IRA stronghold after a riot. Following his starmaking turn in ‘Starred Up’, it’s another authentic, go-for-broke performance in a brilliant film.

In ‘’71’ you play a soldier at the peak of his physical condition. What was the biggest challenge making the film?
‘Endurance. It was long hours and tough conditions. We were shooting nights and it was low budget, so we didn’t really have much back-up. I buggered my lungs making it. I had a bad chest infection that I had to work through. But I knew we were doing something that could depict war properly, that wasn’t glorifying it or turning it into some generic war movie, so it was worth it.’

You were working with a first-time film director, Yann Demange. What was that like?
‘He’s a good bloke. I’ve got time for Yann. He’s very energetic where he needs to be, but sensitive as well. I’d go as far as saying he’s probably shaved about five years off his life expectancy making “’71”.’

What’s been the toughest training regime you’ve ever undertaken for a role?
‘Three months before shooting on “Unbroken”, I was on a diet, busy getting skinny. I had a trainer who took me in the gym and would help with shedding weight but also with stamina. In the run up to shooting, he needed to try and widen my pelvis too.’

Excuse me, widen your pelvis?
‘Something to do with flexibility. There was a lot of stretching and shit. Having done all this emaciated stuff and all of the looking-like-we-were-going-to-die POW stuff, I remember feeling like I’d done myself a favour by putting this type of training in before the shoot. Otherwise I think I’d have been screwed when it came to the Olympic stuff.’

You’re tucking into a delicious looking breakfast right now.
‘This is only my third fry-up this year. It’s great.’

Alan Partridge’s fry-up advice is to make a breakwater with the sausage so the beans don’t touch the egg. Do you have a fry-up strategy?
‘Fucking Partridge. I used to do shit like that, though. You, know with food that your mum used to make you eat, that you didn’t like – you compact it, so it looks like you’ve eaten more? I do like black pudding. Not on its own, but I think black pudding complements a mouthful, doesn’t it?’

Well, it’s intensely flavourful. Moving on, who do you trust in terms of career advice?
‘I’ve been with my London agent for ten years, and so now I really trust his opinion. We have disagreed over the years, but more often than not he’s right. And I’ve got a younger sister – she’s 18, she’s dead smart, got a good head on her shoulders. Her advice is priceless, too. As is my mum’s, she’s a good judge of character. My mum’s opinion is very important to me.’

You’re a massive Derby County fan. Is it true they’re called ‘the sheep-shaggers’?
‘Well, Nottingham Forest call us that. We’re doing all right, you know. I was up there on Sunday to watch us play Forest. They go on like they’ve won the league already. They’re at the top, but we’re six games in and they’re celebrating already. But yeah, I can see us leap-frogging them. It’s a good time to be a Ram at the minute, very rewarding.’

Have you converted any Americans to following football, or soccer as they call it?
‘Yeah. I like dishing out bits of memorabilia here and there. I’ve got this great photo on my phone of Angelina holding a ram made of Derby china, nestling in her hand like it’s her own little one.’

You should take her to a match.
‘They’d go crazy for that, people at the club. I’d probably end up with a couple of letters after my name for contributions to Derby County.’

‘’71’ screens at the London Film Festival Thu Oct 9 d Fri Oct 10, and is released in UK cinemas on the same day. 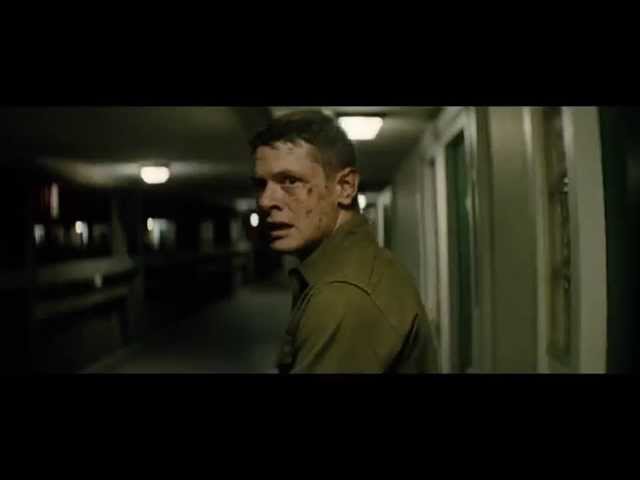 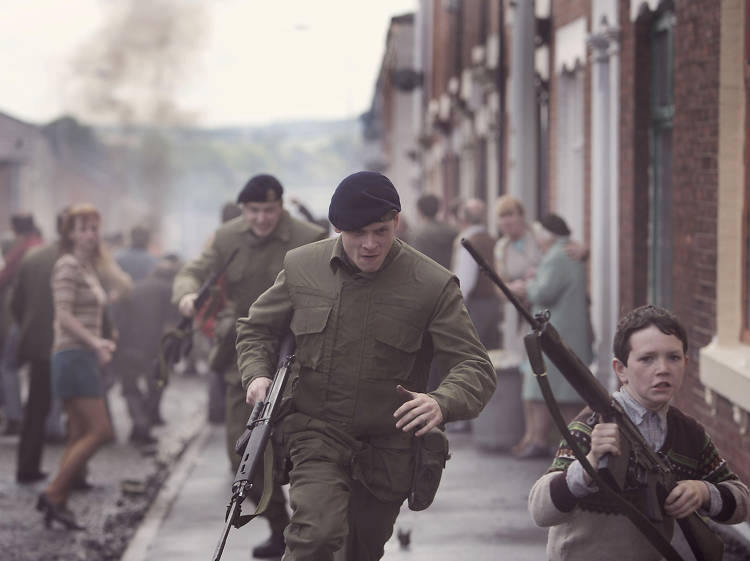 Some of the players in ‘’71’ feel thinly sketched. Still, you could almost bottle the sense of time and place, and the film’s mix of hard-nosed realist drama with more heightened genre elements – action, certainly; horror, even – means that it's always distinctive and has you in its grip from start to finish.