Joaquin Phoenix: ‘I wanted the Joker to go f**k himself’

The most anticipated film of the autumn, ‘Joker’ examines how failed stand-up Arthur Fleck morphed into the Gotham psychopath we all know and dread. Its star Joaquin Phoenix is the film’s beating heart in a jittery, terrifying turn that’s already gathering Oscar buzz. The man himself has a rep for being an occasionally scratchy interviewee – ‘Most of the time I just try to get to the end of interviews’, he tells me, unpromisingly – but the Phoenix I encounter is direct but laid-back, and eager to chat about his turn as the DC supervillain.

Do you have to like a character like the Joker to play him?
‘Frankly, it was a challenge. Sometimes, while reading the script, I felt sympathetic, other times I was repulsed. Made no fucking sense. He was pathetic, whiny. I saw traces of post-traumatic stress disorder in him. When he’s attacked by kids at the start of the movie, he freezes up like a statue, unable to respond. This guy was physically abused when he was a child. It’s difficult not to feel some empathy for someone who’s been through that. That sort of thing changes your brain, the way you think. And it made me change how I see his character. At the start, I wanted him to go fuck himself.’

How did you prepare for the role? Did you study mental health problems in any way?
‘I watched some videos and read two books in particular. I’m not going to tell you which, as I don’t want to give the criminals they’re about more attention than they deserve. The general idea was that political assassins and mass murderers have similar personalities. Before 1963, apparently, there were two categories that had been identified: rational political extremists, and the mad. Then the media gave way to a much wider range of types. Suddenly you got people simply craving attention and notoriety. This seemed interesting to me in the context of the movie. On the one hand, Arthur’s a nervous, introverted guy who tries to disappear from the world. On the other, the Joker becomes is a narcissist who wants to be seen and revered.’

‘The Joker’s laugh creates a divide between Arthur and the world, and it’s from there you get the hatred, anger and bitterness that bring the Joker into being’

Lots of people have been talking about the weight you lost to become the Joker. Does it annoy you when interviewers bring that up?
‘I couldn’t give a shit. For an actor, losing weight isn’t just a question of looks and performance. Otherwise, that’d have no wider interest. Losing weight affects how you feel. I’ll feel hungry. It’ll create that constant lack of satisfaction that’s so integral to the Joker’s personality.’

He’s very much a loner. How do you find spending time alone?
‘That’s what I like best. And it’s his life. For that reason, it’s difficult to know what to think of him. The movie’s key scene in the subway is a good example. He sees a woman being harassed by three drunk men. Not only does he not intervene, but he studies the behaviour of these guys quite stoically, as he doesn’t know how to speak to girls. He thinks it’s normal. There’s something quite harrowing about it.’

‘This guy has his head in the clouds: he’s like a child whose mind isn’t as developed as everyone else’s and has to confront new things out in the world constantly. At the same time, you want to shout, “Arsehole, why isn’t instinct telling you to step in?” Then he starts laughing uncontrollably. That gets him into trouble, he’s attacked by these men. And he defends himself. We can understand why. But a second later he becomes a predator. In two minutes, the character has taken us off in several different directions. That’s what I loved about it.’ 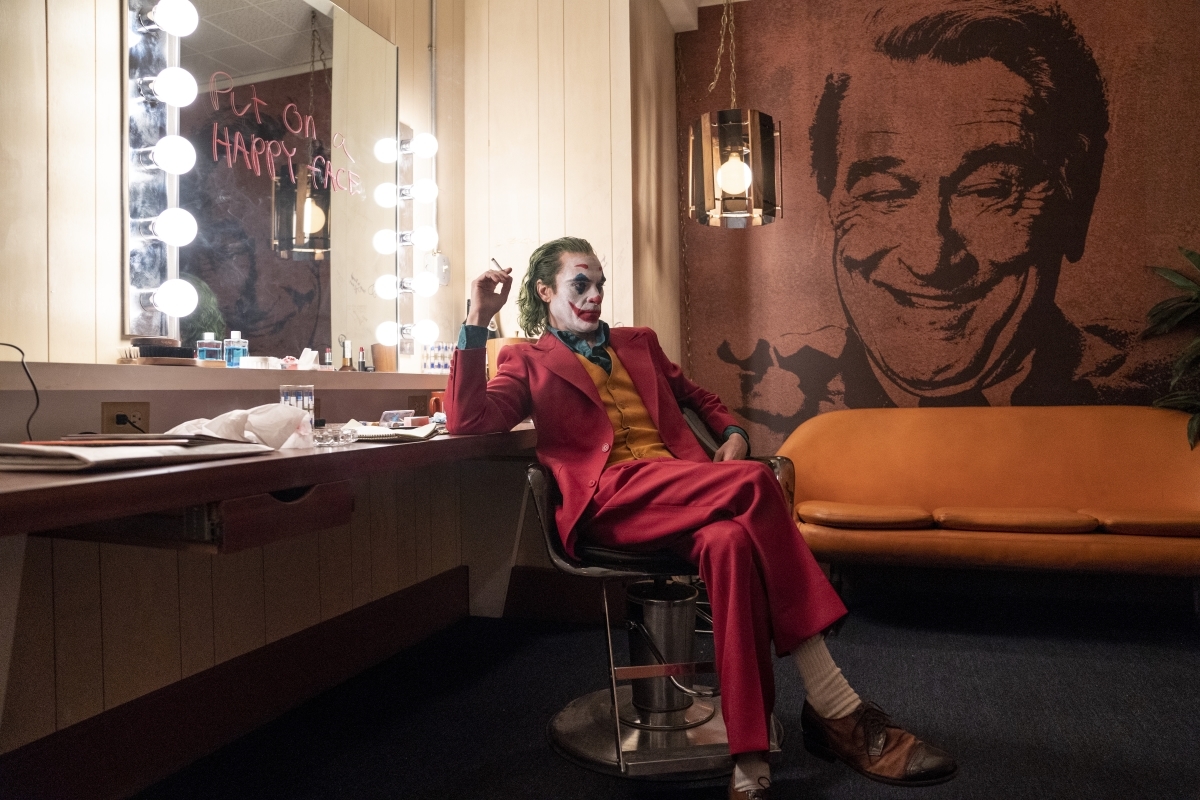 That booming, disquieting laugh is a constant presence in the film.
‘It could symbolise a part of his personality Arthur wants to cover up and which slips out while he’s the Joker. In the script, the laugh appears to be the result of trauma. When I started working with Frances Conroy, who plays the Joker’s mother, something in her behaviour made me think about what it must have been like to be her child. I imagined Arthur younger, laughing in an inappropriate way at school. Excusing him in front of the principal, I imagined she may have made up that Arthur suffered from some sort of illness.

‘One morning, [director] Todd Phillips and I added some dialogue in a scene where the Joker speaks to his mother: “You always told me that I laughed too much because I was ill, but you’re wrong, this laugh is who I really am.” The laugh creates a divide between Arthur and the world, and it’s from there you get the hatred, anger and bitterness that bring the Joker into being. I found the idea that a part of ourselves could act in a way that prevents us from understanding the world very interesting.’

You can definitely detect the influence of Martin Scorsese films like ‘Raging Bull’, ‘Taxi Driver’ and above all ‘King of Comedy’ in ‘Joker’. Robert de Niro plays a TV presenter in it, too...
‘I don’t like namechecking other movies, even if great past works have clearly influenced us. But either way, we didn’t speak about that beforehand. What “Joker” does share with ’70s cinema is that it depicts a complex protagonist in a cinematographic form that doesn’t tell us exactly how we should feel. I’m not a fucking cinephile, for sure, but I sense we’ve lost that. In movies based on comics, motivations and behaviours are always obvious. Whether it’s goodies or baddies, it’s always simplified. And I don’t think that reflects how things are in real life. I’m not totally against simply being entertained, but after 20 minutes, I usually feel like I’ve got all I’m going to get and I want to stop. I prefer ambiguity. I want “Joker” to make audiences think.’

I was struck by the fact that such a personal film could be produced by a major studio.
‘Yeah, it was pretty gutsy on their part. They let Todd Phillips pretty much do what he liked. I never thought of “Joker” as a blockbuster, and approached it like any of my other movies. I’ve been lucky in my career, man. It’s been rich and fulfilling. It’s on directors like that to do as much as possible with the tools at their disposal.’

Be it Paul Thomas Anderson, James Gray or Jacques Audiard, you’ve always gone for these sorts of characters.
‘As long as there are good filmmakers with things to say, they’ll say them. Sometimes difficulty can be liberating. It wasn’t easy for Todd Phillips to get the green light to direct “Joker” in the conditions he thought necessary. But this struggle fed into his work. And you can see it in the movie. In situations like that, you become more invested and sure of what you really want. I don’t think I’d like things to become too easy any day soon.’

‘Joker’ is out in cinemas on Fri Oct 4. Read our review here. 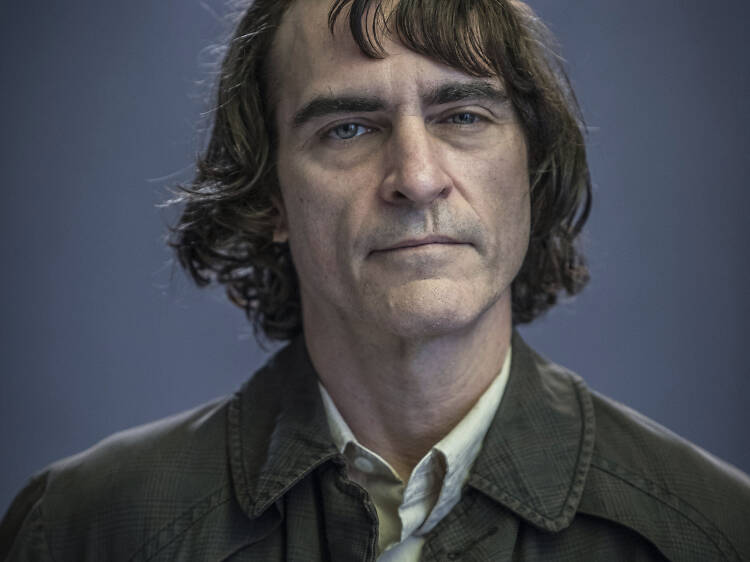