Joseph Gordon-Levitt on finding his balance, playing Snowden and annoying his neighbors

Straddling Hollywood’s heroic blockbusters and impressive indies, Joseph Gordon-Levitt steps into the void with The Walk

He might not be an action star yet, but Joseph Gordon-Levitt sure can move. You’ve watched him defy gravity in Inception’s head-spinning hallways and emerge from the morose The Dark Knight Rises not only unscathed but in flight: a future Robin. He led a celebratory flash mob in 2009’s (500) Days of Summer and cut a rug with Scarlett Johansson in 2013’s sexy Don Jon, a comedy he wrote and directed. Maybe most memorably, the 34-year-old former child star has hosted Saturday Night Live twice, the first time showboating his way through Singin’ in the Rain’s “Make ’Em Laugh,” wall-runs and all, the second in a Magic Mike routine.

Dancing is particularly important to Gordon-Levitt’s latest project, The Walk, the opener of this year’s New York Film Festival, about an immortal, real-life performance that captivated New York City and the world. On an early August morning in 1974, with President Nixon on the cusp of resigning, a mysterious lone figure stepped into the space between the then-recently completed Twin Towers, his balancing pole at perpendicular odds to an improbable stroll 1,368 feet above thrilled onlookers. After an illegal 45 minutes, French high-wire artist Philippe Petit was arrested (charges were dropped when he agreed to perform in Central Park), though not before creating an indelible image of NYC poise, in the process imbuing the buildings with a poetry that survived their demise.

The story of the “coup,” as Petit called it, became 2008’s Oscar-winning documentary Man on Wire. But now, dramatized in fairly terrifying 3-D by director Robert Zemeckis (Back to the Future, Forrest Gump), and with Gordon-Levitt in the starring role, the full measure of Petit’s arrogance, defiant charm and single-minded obsession bursts off the screen. Gordon-Levitt called us from Los Angeles.

You’re very physical in your performances. Where does that come from?
I love bringing the whole body into the character. Certainly an actor's face and eyes are essential, but to me it's really important figuring out how a character stands, how he walks, what the posture is, especially with a character like Philippe, who's a very physical person. That was a huge part of it.

I understand Petit himself was hands-on in your preparation.
He insisted that he be the one to first teach me how to walk on the wire. I think he wanted to make sure that I wasn’t thinking of as just an act of acrobatics. It's not a stunt. He approaches it more like a dancer. You know, dancing is very physical, but it's an art—it's poetic. It's not just: Oh, that's dangerous.

For years, Petit wanted to make this movie himself and star in it. Did his involvement four decades later make you nervous?
Philippe is a perfectionist in the way that he approaches his art, so I didn’t know how he was going to be. I didn’t know if he was going to be very imposing or demanding. But I was pleasantly surprised to find him nothing but generous and positive. The man I met is 64 years old. The man who walked between the Twin Towers of the World Trade Center was 24. And I think he’s actually grown—he would be the first to say this—he’s grown quite a lot in that time. If I met the 24-year-old Philippe Petit and said, ‘Hey, man, I’m going to play you in a Hollywood movie!’ I think he might’ve stabbed me while I was sleeping.

Did you fall off the wire a lot during the shooting?
Sure, yeah, all the time. Well, it was sort of a blend—I actually never fell off, but that doesn’t mean that it’s physically right. I was trying to eliminate wobble. Once you’ve learned how to walk on the wire, it’s sort of like riding a bike. It would take a lot to fall off once you’ve learned how to do it, how to control that pole. But I had the benefit of not really being 1,300 feet in the air.

Above and beyond balance, is there a mentality that goes into wire walking?
Philippe is so focused on the positive. I think that’s a big part of why he accomplishes the incredible things he does, because he just never focuses on the negative. He never gets defeatist. He never allows himself to go down that rabbit hole of: Oh, this is going to be terrible. We’re all worriers. And worry can be a self-fulfilling prophecy. But Philippe lets his optimism be a self-fulfilling prophecy. And that’s kind of how he approached his relationship with me. He was like: I’m just going to give you all the benefit of the doubt.

There’s also a certain arrogance there—a charming kind, but still.
When Bob Zemeckis and I were talking about the character, I remember one of the movies he asked me to watch was Patton with George C. Scott. Brilliant movie—I had never seen it before. On the one hand, you love him. He’s so compelling and brilliant and powerful. And on the other hand, you’re like: This guy is out of his mind! He is barely keeping it together. To me, that push and pull makes for such a fascinating performance.

Did you and Zemeckis discuss 9/11 and how The Walk would treat the attack, if at all?
Yeah, it was clear from the first time speaking to him what his thinking was behind it—and I completely agree with him. Obviously we suffered a tragic loss on 9/11, but that’s not the only thing that ever happened to the World Trade Center. It’s also important to remember the positive things, the warm and bright images and experiences with whatever it is that you lost. I’ve experienced my share.… Certainly other people in the world have experienced much worse, but I lost my brother [Dan Gordon-Levitt, who died in 2010], so I know what it’s like to suffer a tragic loss. I try to remember who he was, who he is, how he lived, all the beautiful and diverse range of memories that I have about him.

Dan was a fire spinner, a fixture at Burning Man. I bet he would have enjoyed The Walk.
You’re 100 percent right. He really loved Man on Wire, and that was inspiring for me, just knowing the inspiration that Dan took from Philippe’s walk. He would call it the “this-is-it moment,” when you’ve done all this work and you take your first step. And there’s no turning back.

You’ve had those pivotal moments too, like when you left Columbia to get back into acting. What triggered that?
I got so into making little videos and cutting them together. I would stay up all night, teaching myself how to edit, experimenting with dumb little things, singing songs, cutting them together. I was so into doing that that that I stopped wanting to focus on writing essays for classes. And not too long thereafter, I dropped out of school. That’s what led me to want to start acting again. It made me want to get back on set and build a new adult career where I would eventually, luckily, be able to do what I’m doing now. It’s all worked out shockingly well, I’m delighted to report.

Do you miss New York?
I miss New York enormously. I was born and raised in L.A. My family’s here. And here, I live in a house where I have space. I like to pace, you know? I like to be able to sing out loud or maybe yell spontaneously. That’s difficult to do if you’re living in Manhattan, because you’re going to be bothering somebody.

I sense you know this from experience.
I suffered for it by my neighbors beating the shit out of my door with crazy hammers. By the way, that didn’t happen in Harlem. Harlem was the one apartment I had where it wasn’t so looked down upon to be extroverted. There were a bunch of really cool people that lived in that building. I knew my neighbors.

Your next film is Snowden for director Oliver Stone. Can you tell us anything about his take on the controversial leaker?
Sure. He’s a deeply patriotic person, Snowden. What he wanted was to have the American public be able to have the conversation, because that’s what a democracy is, that government is accountable to the people and not vice versa. Ugh, I really don’t want to be the actor telling people what to think about our government! [Laughs] But I would encourage anybody to find out about it for themselves.

You have a pattern of working with strong-willed directors of total control: Stone, Zemeckis, Christopher Nolan, your Brick and Looper director Rian Johnson. Are you worried about Johnson’s upcoming Star Wars: Episode VIII?
Worried? Oh, no. I just think Rian is so brilliant. I actually think they’re going to be the best Star Wars movies—I’m not saying that lightly either. And I haven’t read anything or even know what he’s doing. He and I haven’t had any conversations about the specifics of the movie that he’s making. But just knowing him, there’s no doubt in my mind those movies are going to be so good.

Read our review of The Walk 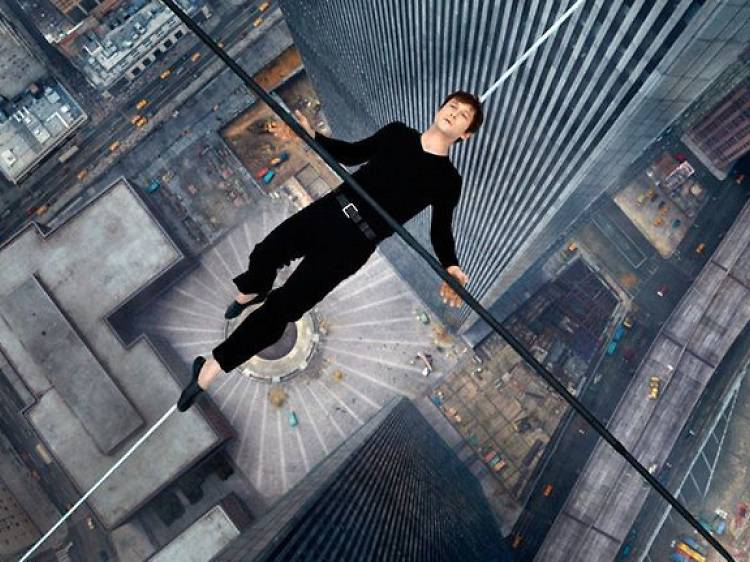 Recreating the crime for The Walk, director Robert Zemeckis does a crackerjack job with the thrills and a so-so one with the laughs (at least the intentional ones) and skips the deeper magic altogether.

Watch the trailer for The Walk