Matthew McConaughey interview: ‘If I win an Oscar, I won’t be at a loss for words’

The ‘Dallas Buyers Club’ actor explains how he dropped 47 pounds to play a man with Aids, and why it’s okay for a serious actor to take his top off

Call it a second act. Call it the McConnassiance. Or McConaughey 2.0. Whatever it is, the actor is on a roll. For a while, everyone knew what they thought of Matthew McConaughey: he was that guy who threw away his talent to get shirtless and make eyes at Kate Hudson in date-bait movies. Then he took two years off and came back with ‘Mud’, ‘Magic Mike’ and ‘Killer Joe’. All of a sudden, McConaughey is everyone’s favourite actor again. And since Hollywood loves a comeback kid (see Ben Affleck) we’ve got a sneaking suspicion the 44-year-old Texan’s name will be in the Best Actor envelope on Oscar night.

McConaughey gives it heart and soul in real-life drama ‘Dallas Buyers Club’ playing homophobic redneck Ron Woodroof, who was diagnosed with HIV in 1985 and given 30 days to live. In the end, Woodroof survived for seven years on a cocktail of black market drugs that he sold to others living with Aids.

Congratulations on the Oscar nomination. Where were you heard the news?
‘I was at home with my wife Camilla in Malibu. She set the alarm for 5.15am and brought me some tea and we sat there watching TV. I was the last name. I got a nice kiss and a high five. Then the kids got up.’

You’re favourite to win. Have you got a speech ready in your head?
‘No, I’m a bit superstitious. I’m not preparing anything. But I tell you this, if it does happen I won’t be at a loss for words.’

So this career U-turn. Did you make a conscious decision? No more ‘Wedding Planners’. Delete Kate Hudson’s number from my phone?
‘Well, I did make a conscious decision: I’m not going to carry on doing the same thing over and over. I was reading romantic comedies and action adventures. And I liked them. But I wanted to do something that scares me a little bit, that shakes my floor a little bit.’

What was your first move in making that happen?
‘The first move was saying “no” to scripts that were coming in. That was six months of saying “no” and then a year of nothing. And in that year I still didn’t know what I wanted to do. But something happened. I gained anonymity and suddenly it became a good idea for William Friedkin to call about “Killer Joe”, or Steven Soderbergh about “Magic Mike”. Then I did “Mud”.’

Did you get the jitters in that dry patch?
‘A little bit. But I hunkered down with my wife. And I had a son come into the world. When I got anxious, I could be like: shepherding my newborn son is a great thing to be doing.’

You took paternity leave.
‘Yes. If it hadn’t have been for my son, I’d have been more antsy for sure. I look at it as switching a gear: same book, different chapter. I could have done some of these roles five or ten years ago. I didn’t. I had a nice run there. I enjoyed those romcoms. They’re light. They were fun. So they didn’t get critical acclaim. That’s not my concern. Now I’ve started doing this and I’m enjoying it. People are going, “We like him.”’

So you’re enjoying the ecstatic reviews?
‘It’s sure nicer when they say something nice.’

People used to joke that you got shirtless all the time in romcoms. But now you’re doing serious films, you’re still taking your shirt off.
[Laughing] ‘If it comes in a role I’m not going to say, “No shirtless scenes.”’

You lost a lot of weight to do this film. I read that you lived off fish and one glass of wine a day. True?
‘No! That’s a misrepresentation. It makes it sound more extreme. I read somewhere else: “Matthew McConaughey lived on one spoonful of tapioca pudding.” False! I had fish twice a day and vegetables twice a day, had my wine at night.’

Did it get hard to concentrate existing on so few calories?
‘No, I was more focused than I’ve ever been. All the energy and power I lost from the neck down sublimated into my brain. I needed three hours less sleep a night. I didn’t have physical energy, but my mental energy was through the roof.’

What kind of reaction were you getting from people on the street?
‘I was pretty much a hermit at that point. For the people around me all the time, it was a gradual thing that happened daily, so it was never shocking to them. Though one time my daughter was like: “Papa, why is your neck like a giraffe?”.’

Can you go back to eating normally after an extreme diet like that?
‘No. Putting it on is dangerous. The first full-size meal you eat, your body remembers that’s where it’s supposed to go, so it starts to sprint. You got to pull the reins on it. It’s not a sprint. It’s a marathon. You got to go slowly.’

Before you go, you’ve got to explain that freaky chest-thumping thing you do in ‘The Wolf of Wall Street’. What was that?
‘That’s me. That’s something I do before scenes. It’s a relaxation exercise I started about 20 years ago. We were filming, and after about five takes we had the scene. Martin and I were happy, but Leonardo was like, “What’s that thing that you do? Will you put that in the scene?” Sure.’ 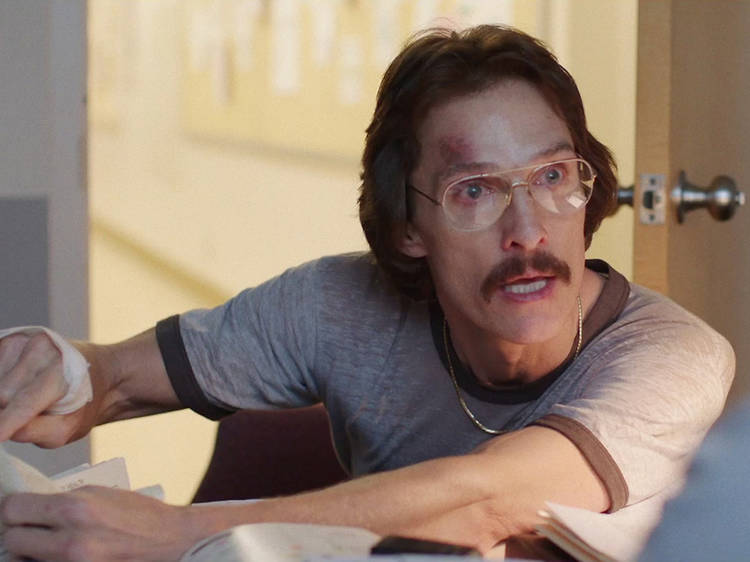 Matthew McConaughey stars in the true story of a womanising Texas whose life takes an initially devastating, ultimately inspiring turn when he contracts Aids. 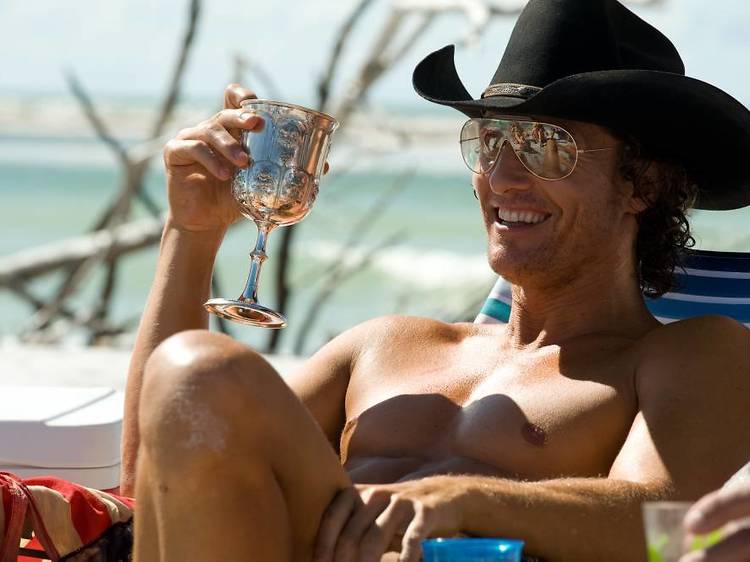 The highs and lows of Matthew McConaughey

With an Oscar nomination and a Golden Globe win for ‘Dallas Buyers Club’, 2014 is shaping up to be Matthew McConaughey’s year. We take a look at his chequered past – clothing optional...

Read more
See the highs and lows of Matthew McConaughey